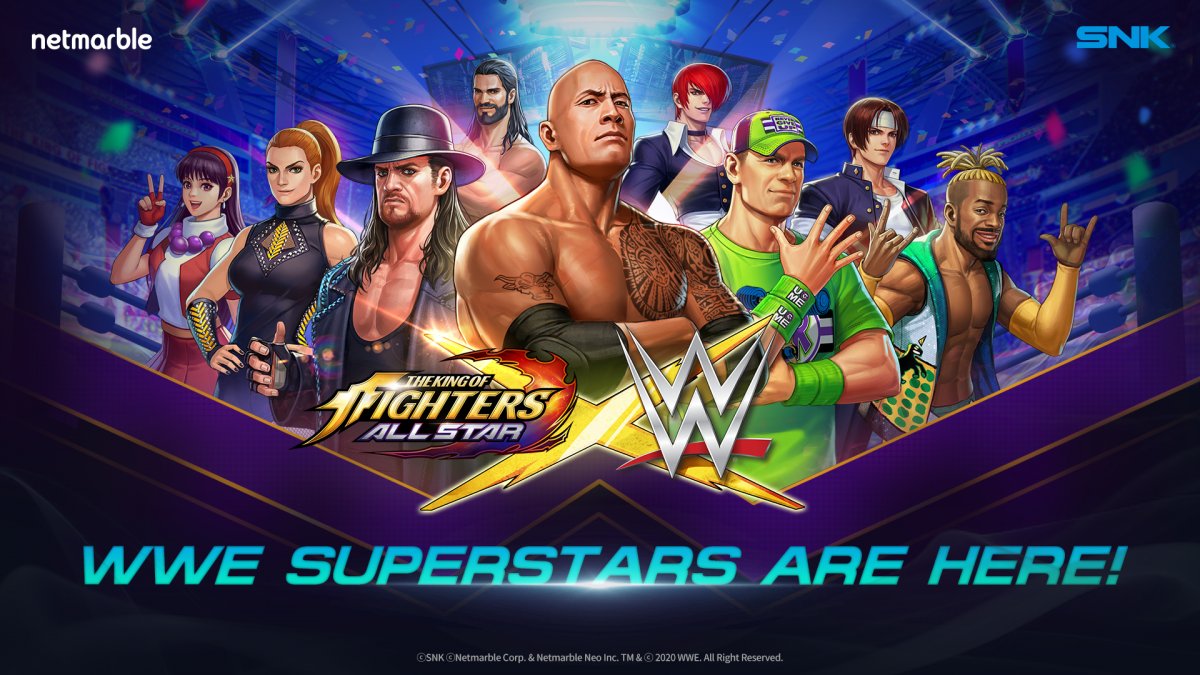 WWE has officially announced their new collaboration with The King of Fighters ALLSTAR mobile game.

It was revealed today that the collaboration will run until Thursday, June 4, but the WWE Superstars collected will be permanent additions to the player's rosters. The Rock, John Cena, The Undertaker, Seth Rollins, Becky Lynch and SmackDown Tag Team Champion Kofi Kingston are playable characters.

In addition to the playable Superstars, the collaboration also features WWE-themed events, dungeons and more. The update is available now for Apple iOS and Android devices.

Below is WWE's announcement and the full trailer for the WWE x KOF ALLSTAR collaboration:

WWE and Netmarble are proud to bring a roster of larger-than-life Superstars to the world of THE KING OF FIGHTERS ALLSTAR. From today until Thursday, June 4, fans can collect and permanently add WWE Superstars The Rock, John Cena, The Undertaker, Becky Lynch, Seth Rollins and Kofi Kingston to their respective rosters in the action-packed mobile fighting game.

Each Superstar's appearance, mannerisms and move-sets have been faithfully recreated for players to experience. Beyond securing WWE Superstars for their roster, fans also have several WWE-themed events, dungeons, and much more to take part in, including:

 WWE-Themed Dungeons: Kofi Kingston is obtainable by gathering rewards from a Rush Event Dungeon; there is a WWE-themed Mini Dungeon to get various rewards too

 WWE-Themed Roulette: Players can get 'John Cena' via the new Roulette Event

"WWE and The King of Fighters have been entertaining people around the world for decades, so bringing these two franchises together in our game is something truly special for us and the players," said Shin Hwa Cho, Executive Producer of Netmarble. "We worked closely with WWE to provide a truly authentic experience, bringing the likeness and moves of each Superstar to our game. We know our players are going to love the experience."

THE KING OF FIGHTERS ALLSTAR boasts fast-paced fighting action as players battle through waves of enemies, giant bosses and rival fighter teams. The excitement is paired with cutting-edge graphics, bold colors and lightning-fast animations. In addition, this game features all of KOF's classic fighters from '94 to XIV, with over 130 fighters available to collect, and more to come with seasonal events, collaborations with popular IP such as TEKKEN 7 and SAMURAI SHODOWN and additional content updates for players to enjoy.

THE KING OF FIGHTERS ALLSTAR is available to download on Google Play and the App Store in over 175 countries and comes with support for English, Taiwanese, Indonesian, Thai, Spanish, Italian, French, Portuguese, Russian and German languages.