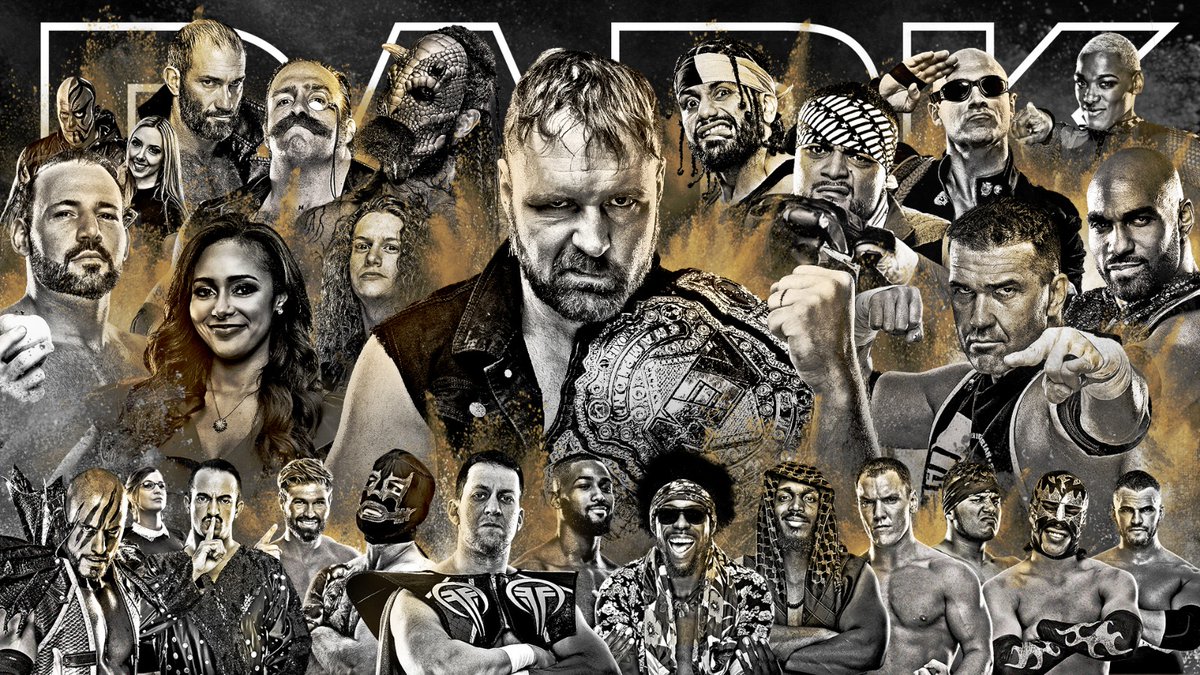 Welcome to Wrestling Inc's recap of AEW Dark, which airs every Tuesday at 7 PM EST on AEW's YouTube Channel. Be sure to chime in on your thoughts about tonight's show in the comments section below. Additionally, share our live coverage through social media. Make sure to click the REFRESH button to continue to get the most current up to date coverage.

Excalibur and Taz welcome us to another edition of AEW Dark. They run down the evening's card, which includes AEW world champion Jon Moxley in action. Taz says he'll be keeping a close eye on that bout as his client, Brian Cage, faces Moxley for the title at Fyter Fest.

Kazarian and Fuego begin. Headlock takedown from Kazarian. He plants Fuego with a Russian leg-sweep, then tags in Sky. SCU with some tandem offense including a big boot/lungblower combination. Fuego nails Sky with a knee to the gut following by a running shooting star press for a nearfall. Rider tags in and rolls Sky up for two. Rider shows off his speed...shotgun dropkick off the ropes. Fuego and Rider go for a double-team but Sky outsmarts them and brings in a fresh Kazarian. Running attacks from Kazarian...guillotine leg drop onto Rider...Sky and Kazarian connect with SCU later for the win.

Backstage Brodie Lee addresses Alan Angels, now known as 5. He welcomes him to the Dark Order, and says he hopes he'll make him proud.

Lee Johnson makes his way out for his singles matchup against 5. Dark Order is otu next minus Lee.

5 opens up with a flurry of strikes onto Johnson. He drops him with a spin kick. Johnson shakes it off and lands a series of arm-drags followed by a flush dropkick. He dumps 5 to the outside, who is stared down by his fellow Dark Order teammates. 5 retakes the advantage by whipping Johnson into the ring post. Back in the ring 5 hits a step through flatliner for a two count. Standing frog-splash onto Johnson's arm. He continues to go after the arm before dropping Johnson with a widowmaker. Another cover...Johnson kicks out again. This time 5 misses the standing frog-splash...Johnson rocks 5 with an elbow, then decapitates him with a discuss lariat. Running neckbreaker from Johnson...he sets up...drive-by kick. Johnson sends 5 into the ringpost...he rolls to the outside to regroup...tope con hilo from Johnson connects! Johnson throws 5 back in and hits a blue-thunder bomb but 5 kicks out. 5 gets dumped to the apron...apron DDT. Brodie Lee comes out...5 immediately lands a modified lungblower for the victory.

Afterwards 5 throws Johnson into 10, who rocks Johnson with a pump kick. They continue to attack Johnson as Lee watches with a huge smile on his face.

Next up...Musa and Brady Pierce take on The Inner Circle's Santana & Ortiz.

Ortiz and Musa begin. Tie-up. Ortiz drops him with an arm ringer. Nice sequence of chain wrestling that ends with Ortiz tearing at Musa's arm with a wristlock. Musa breaks the grip and grabs a waistlock...Ortiz switches behind and tiger claws the back. Musa gets dumped to the apron...he drives his shoulders into Ortiz's gut but Ortiz catches Musa in a sit-out powerbomb, then sends him into Santana who rocks him with a knee. Pierce tries to help his partner out but Santana drops him to the outside and hits a springboard moonsault. Back in the ring...Santana and Ortiz take Musa out with a cutter/double-foot stomp combination. Santana talks some trash to Pierce before smashing Musa with a right hand. Pierce tags in and goes after both men at once...he misses a moonsault giving Ortiz and Santana the advantage once again. They trap both men in the corner...cannonball senton from Santana. Street Sweeper lands...that'll do it.

Backstage QT Marshall approaches Dustin Rhodes and Brandi Rhodes...Marshall tells Dustin that they are no longer working a tag match because he needs the ring time according to Allie. He hands them the t-shirts that Allie designed for the Natural Nightmares...Brandi curses Marshall out.

Anthony Catena is out next, followed by his tag partner Suge D (Pineapple Pete). They'll be taking on The Butcher and The Blade.

Anthony Catena/Suge D versus The Butcher and The Blade

The Butcher traps Suge D in the corner and drives his shoulder into his gut. Blade tags in and chokes Suge D with his boot. Referee pulls Blade back giving Butcher an opening for an illegal choke. Quick tags by Butcher and Blade. Double-headbutts takes Suge D down. He lands a huge right hand but Blade shakes it off. Suge D tries the Karate Kid crane kick but Blade catches it and hits a fisherman's neckbreaker. A second one. Catena finally tags in...he runs right into a kick by Blade. Stunner from Blade...Butcher sneaks in and levels Catena with a stiff lariat. He picks Catena up for a running powerslam. Suge D breaks up the pin but Butcher and Blade make him pay with tandem offense. Suplex into a lungblower...Catena can't kick out.

The Butcher and The Blade win by pinfall

Out next and making his AEW debut is Zack Clayton. QT Marshall is next accompanied by Allie, Dustin Rhodes, and Brandi Rhodes. Dustin and Brandi's shirts are clearly way too big. Marshall walks Allie over to the commentary booth prior to the match beginning.

Tie-up. Marshall traps Clayton in the corner...referee forces a break. Clayton uses the opening to hit a knee to the gut. Marshall shakes it off and rocks Clayton with a series of right hands. Clayton throws Marshall to the outside but he jumps right back in and hits a lariat sending Clayton to ringside. Marshall skins the cat...Allie is star struck saying that he did the move for her. Back in the ring...Clayton drops Marshall to the apron...Marshall goes for a springboard but Clayton surprises him with a dropkick. Allie runs to see if Marshall is okay...Clayton talks trash and punches Marshall repeatedly. Clayton hits a running corner lariat, followed by a stalling vertical suplex. Big knee drop for a nearfall. Irish-whip...Marshall bounces off the ropes and connects with an enziguri. He sets up for the QT cutter...snap powerslam by Clayton. He goes to tear off the turnbuckle...Brandi Rhodes distracts Clayton...Marshall accidentally runs into Brandi...he goes to check on her but Allie complains that she broke her nail so Marshall goes to her. Allie then distracts Clayton on the ropes allowing Marshall to connect with the QT cutter for the win.

We go right into our next matchup. Sonny Kiss is out first...Christopher Daniels second.

Tie-up. Daniels grabs a headlock. He backs Kiss into the ropes and wrenches down on the arm. Daniels catches Kiss in a powerslam off the ropes. He goes back to the arm...Kiss rolls out and slaps Daniels across the chest. A very impressive series of arm-drags from Kiss. Daniels whips Kiss into the turnbuckles but he bounces over and drops Daniels with a forearm. Kiss baits Daniels in...Daniels bites and sends Kiss flying with an exploder suplex. Hard whip by Daniels and Kiss hits the turnbuckles hard. Another one. Daniels follows up by driving his knee into Kiss' spine, then quickly lifts Kiss up in a snap-vertical suplex. Kiss lands a few right hands but Daniels with an STO out of nowhere. He quickly applies a crossface...Kiss is right in the center...he manages to make it to the ropes. Daniels is angry and aggressively stands on Kiss' neck on the ropes. Referee pulls Daniels back and nearly DQ's him. This gives Kiss an opening...huge flurry of strikes including a dropkick. Kiss uses the ropes to hit an elevated split-legged drop. Standing moonsault by Kiss for a nearfall. Kiss goes for a discus forearm...Daniels counters with a standing uranagi. Kiss out of nowhere with a roll-up...Daniels kicks out. Quick series of pinfalls by both competitors..Daniels eventually connects with the Angels Wings...Kiss is done.

Tag team action is next. Pete Avalon and Brandon Cutler, who are still searching for their first win in AEW, are out first accompanied as always by Leva Bates. Jurassic Express is out next. Luchasaurus and Marko Stunt will be competing for their team.

Avalon and Stunt begin. Stunt quickly tags in Luchasaurus without Avalon knowing leading to a fun reveal. Avalon dodges Luchasaurus' early attacks...but he cannot dodge a ripcord strikes that nearly kills him. Cutler tags in...he hits a standing kick and dropkick but Luchasaurus is too big to go down. Springboard maneuver from Cutler...he lands into a big chop by Luchasaurus. Huge thrust kick by Luchasaurus. Cutler answers with a standing enziguri but Luchasaurus smashes Cutler on his face, then hits him with a wheelbarrow suplex. Stunt tags in...tandem offense by Jurassic Express. Cutler drags Stunt to his corner and tags in Avalon...Stunt manages to take him down with a frankensteiner. Bates distracts Stunt allowing Avalon to hip-toss him from the top rope. Avalon and Cutler are still not on the same page but they continue to work the little man down. Stunt finally brings in Luchasaurus again...he picks up Cutler from his neck and sends him flying, then rocks Avalon with a roundhouse kick. Trouble in Paradise to Cutler. He grabs Avalon for a chokeslam...Cutler saves Avalon but Luchasaurus decides to chokeslam them both...Stunt hits a splash off of Luchasaurus' shoulders for a two count. Avalon shows off his athleticism by dropping Luchasaurus with a springboard DDT. Cover...only two. Avalon and Cutler almost get their first win after a sunset bomb/springboard elbow combo. Luchasaurus regains control after a hook kick and roundhouse drops both competitors. Jurassic Express pick up the win after a chokeslam and moonsault.

Taz laughs because Cutler and Avalon have yet to get a win in AEW. Highlights of the bout are shown.

Tie-up. Moxley and Anthony go for a wristlock...Anthony wins the exchange but Moxley powers out of the hold with ease. Moxley trips Anthony and goes for a waistlock. Anthony uses the ropes to make the referee call for a break. Moxley brings Anthony down with a headlock. Moxley runs through Anthony with a shoulder block. He goes for another but Anthony hits an arm-drag and dropkick in succession. Firemans carry...Moxley shifts his weight and avoids the maneuver. Fight spills to the outside where neither man can gain the clear advantage. Back in the ring Moxley goes after Anthony's leg. He climbs to the top...Anthony forces him to jump sooner...modified sidewalk slam from Anthony...he goes for the surfboard, then kicks Moxley's face into the mat. Huge chop by Anthony. Another. Moxley shakes it off and rocks Anthony with a lariat. He sets up for a gotch piledriver...Anthony reverses it and picks Moxley up...DVD for two. Anthony charges...Moxley goes for the Paradigm Shift but Anthony has it scouted. He goes to the top...Moxley counters with a powerbomb. Texas Cloverleaf applied...Anthony taps out.

Taz congratulates Moxley on his victory but asks how he will be able to last against Cage when an unknown like Anthony hang around for a little too long. Excalibur claims that Moxley proved he was a champion by still getting the job done on an opponent he didn't have too much time to plan for. Cage and Moxley stare each other down.