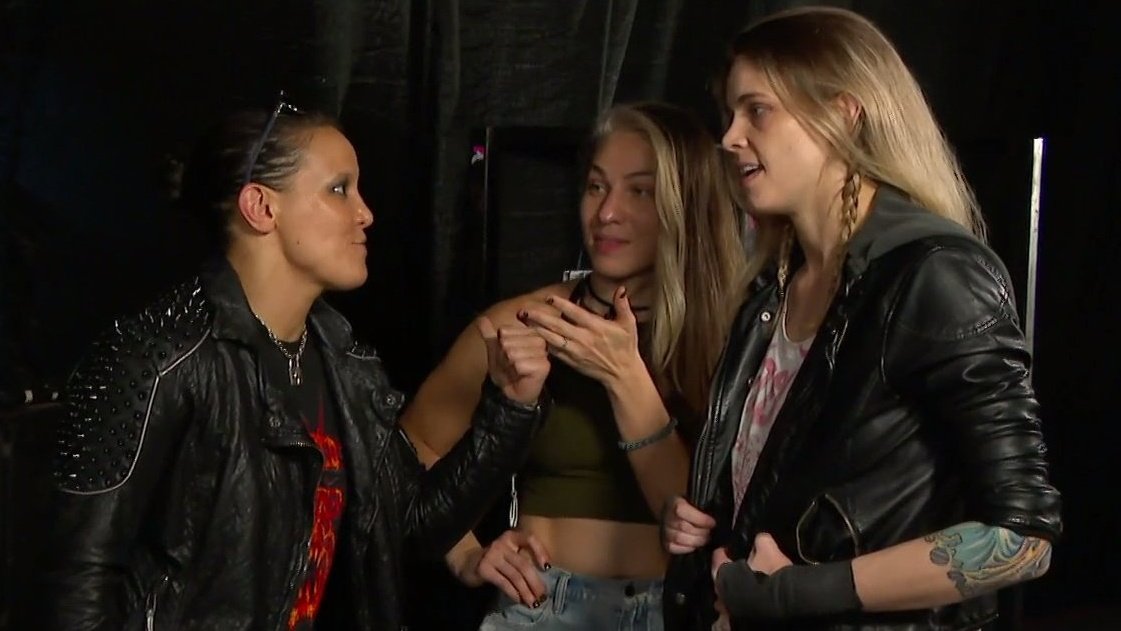 The final RAW Underground segment for this week opened with Shafir making her debut, quickly starting a brawl with an enhancement talent. This enhancement talent is popular indie women's wrestler Brandi Lauren, but she was not identified on TV. Lauren and Shafir brawled until Shafir won by submission. Shafir stood up to celebrate her win but was quickly attacked from behind by Nia Jax. Jax then dropped Duke.

Jax had returned to TV earlier in the night by attacking Baszler during her tag team match with Asuka vs. the WWE Women's Tag Team Champions - RAW Women's Champion Sasha Banks and SmackDown Women's Champion Bayley. Jax, who was suspended without pay in the storylines two weeks ago, brawled to the backstage area with Baszler until Baszler returned to help Asuka secure the win. After the RAW Underground sneak attacks on Shafir and Duke, Baszler hit the ring platform and squared up with Jax for a fight. The bell rang but Jax retreated to the floor, and walked out of RAW Underground. Shane tried to get her to stop and fight but she never came back, leaving the door open for next week.

Tonight's RAW Underground opening segment saw Erik of The Viking Raiders defeat an enhancement talent. Dolph Ziggler watched from ringside with Shane and ended up giving a 4/10 rating after Shane asked him to rate Erik's performance. This "4/10" was a reference to WWE Hall of Famer Bret Hart. Erik challenged Ziggler to fight and he accepted. Ziggler ended up winning by stoppage after a thumb to the eye and a Sleeper hold. The post-fight angle saw Ivar attack Ziggler and knock him off the platform.

Shane later announced Ivar vs. Ziggler for next Monday night.

The second RAW Underground fight of the night saw Riddick Moss and Arturo Ruas return to the platform. They brawled for a few minutes until tumbling to the floor, still fighting. They ended up dropping a few of the extras at ringside as Shane gave them praise for the fight.

On a related note, Shane had his extra large security guard backstage with him again this week, standing guard outside Shane's door until it was time for RAW Underground to kick off in the final hour. As we've noted, the guard is Jordan Omogbehin, the NXT talent who recently played one of Akira Tozawa's ninjas.

Stay tuned for updates on Week 4 of RAW Underground, which will air next Monday night during the post-SummerSlam episode.

Below are several shots from this week's RAW Underground action, along with the RAW debut of Baszler, Shafir and Duke together, plus Jax's return:

They all tap out.@QoSBaszler just made #SmackDown #WomensChampion @itsBayleyWWE submit to earn the win for herself and @WWEAsuka! pic.twitter.com/xKWcwxM4Ns