As noted earlier this week, Matt Riddle’s “#SpeakingOut” accuser Candi Cartwright (Samantha Tavel) filed a multi-million dollar lawsuit against Riddle, WWE, EVOLVE and Gabe Sapolsky. You can click here for full details on the lawsuit, including Cartwright’s allegations against each party. This lawsuit comes after Riddle filed a lawsuit against Cartwright back in September, which you can read about at this link.

Cartwright’s lawsuit alleges that Riddle sexually assaulted her from 2017-2020, as they also had a relationship. Cartwright also says she had dates booked with both WWE and EVOLVE in January of this year, and that her refusal to perform sexual acts on Riddle led to her dismissal after Riddle allegedly told the companies not to book her any more. An e-mail has been revealed, via David Bixenspan of Babyface V. Heel, that was reportedly sent to Cartwright from WWE referee Drake Wuertz, who also worked to book extras for WWE. The e-mail was apparently sent on Friday, January 31 at 9:22pm, from the “NXT Extras” e-mail address on the WWECorp.com server, to Cartwright’s Yahoo address. The e-mail reads like this:

“Samantha I regret to inform you that we will have to cancel your booking for this Wednesday February 5th as well as March 4th. Apparently there were some past issues I wasn’t aware of with you and one of our talent that would not make for an ideal work environment. Good luck to you in your career.

On a related note, Cartwright’s suit also claimed that she also lost EVOLVE bookings for March but as in the tweet below, she appeared as a social media ambassador for the EVOLVE 146 event on March 1 in Massachusetts.

Below is a screenshot of the e-mail sent from Wuertz to Cartwright, along with the tweet of Cartwright at EVOLVE 146: 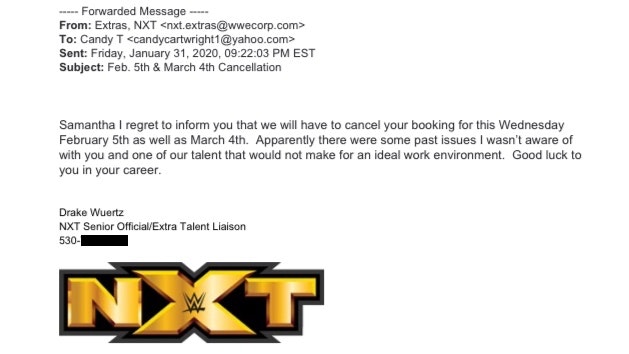 Just about ready to start #evolve146 keep it here for backstage access from our social media ambassador @CandyCartwright or follow along on our Instagram story: @WWNEVOLVE pic.twitter.com/IMdbQ6cFcE

Stay tuned for more on the case.