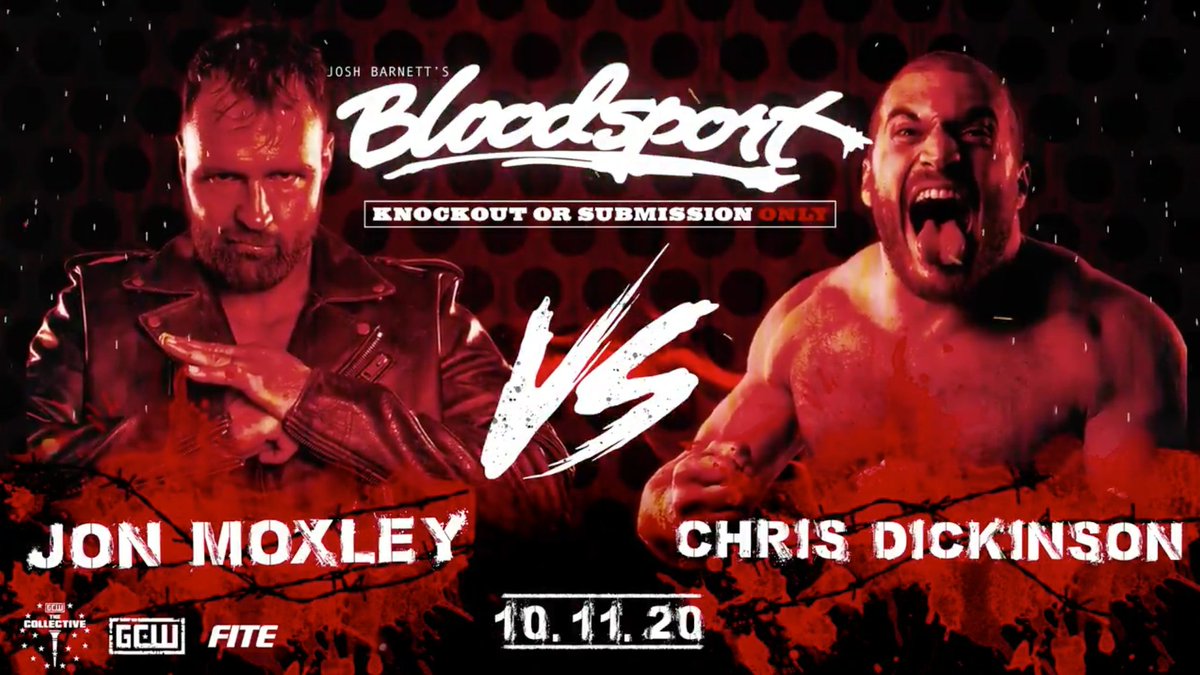 Welcome to Wrestling Inc's live coverage of Josh Barnett's: Bloodsport 3! This event is part of GCW's The Collective - taking place live at the Marion County Fairgrounds in Indianapolis, Indiana. You can watch the event on FITE TV starting at 8 PM EST.

Be sure to chime in on your thoughts about tonight's show in the comments section below. Additionally, share our live coverage through social media. Make sure to click the REFRESH button to continue to get the most current up to date coverage. Here is what's on tonight's card:

??This line-up gives us chills??

Welcome to Bloodsport 3! Before the show begins, the announcer introduces each of the competitors for tonight's bout.

When all the fighters make their way to the ring, Josh Barnett comes out to thank the fans live and at home for their generous support. After, the opening match begins!

Matt Makowski goes for a quick left to start the match. Simon Grimm ducks for a single leg attempt. Grimm grabs hold of the ankle - Makowski turns things over with some side control. Makowski rolls out and comes back in. Grimm with a takedown. Makowski rolls through with a series of palm strikes. Grimm looks for a double wristlock takedown - he's having a hard time trying to grasp Makowski's arm. Grimm reverses it into a side headlock. Grimm kicks Makowski in the shin. Makowski moonsaults his way over for a front facelock. Both men restart.

Makowski cartwheels his way towards a cross arm breaker. Grimm keeps his hands clasped. Grimm climbs on top. Makowski jabs Grimm with a few forearms to the ribs. Grimm lands a hard elbow and a headbutt. Makowski is in the mounted grip - he lays down a series of rights. Grimm targets Makowski's left ankle. They reset. Both men are trading forearms in the center of the ring. Makowski connects a solid high kick on Grimm. Makowski looks for another cross arm breaker. Grimm gets back on his feet - momentarily. Grimm sends Makowski right on the back of his head with a half-and-half suplex. The referee calls for this match to end via a knockout.

.@deviousjourney with the hard-fought victory in the opening bout of #BLOODSPORT pic.twitter.com/1Dp3SRBgHx

After, we begin the first round of the Women's Tournament!

Killer Kelly tries to look for a single-leg takedown, but Allysin Kay ducks out of the way. Kay goes right for a takedown. They both restart. Kay catches Kelly's leg. Kelly swings back with a shot to the jaw. Kay lands a nice takedown on Kelly. Kay grips on to Kelly's arm - Kelly escapes. Kay goes for a double leg takedown before gaining side control. Kay gets an armbar locked in. Kelly finds her footing with a toehold drop then a forearm smash to Kay's head. Kay picks the leg. Kelly attempts an escape by driving her knee into Kay. Kelly officially escapes with a series of shots. Kay looks for a half nelson.

Kelly gets up to a standing position to charge in with some kicks. Kay drops Kelly with a big boot. Both women exchange a series of right hands. Kay has a cross arm breaker locked in. Kelly escapes again with a few lefts and rights. Kelly tees off with a series of shots again. Kay cranks down on her ankle. Kelly and Kay rock each other with more lefts and rights. Both women go back to a standing position. Kelly misses a kick - Kay sends her down with another double leg takedown. Kay looks for Kelly's arm for another arm breaker. Kelly jumps up behind Kay with a rear-naked chokehold. Kay uses a desperation escape to break out!

Kelly sends Kay across the mat with a beautiful butterfly suplex. Kay gets up to land a roundhouse kick. Kay rolls Kelly up and drives her elbows into her head. Kelly's tenacity is short-lived before Kay wraps her legs around Kelly's throat. Kelly cannot take it anymore and taps out. Kay wins the match via tap out.

Kay will advance to the final round of the Women's Tournament. The second opening match of this tournament follows right after that.

Leyla Hirsch and Lindsay Snow test their strength after the bell rings. Hirsch connects a single leg takedown. Snow rolls through with an armbar. Both women make their way back to a standing position. Hirsch jumps up on Snow's back. Snow flips her up and over her head. Hirsch has a rough time trying to lock in a triangle choke - Snow rolls through. Hirsch keeps moving with a series of shots. Snow gets up and lands a suplex. She gets caught with a hard elbow after. Hirsch and Snow exchange forearm strikes. Snow goes right for a heel hook. Hirsch taps out. Snow takes the opening match win.

Snow will meet Allysin Kay in the finals later on tonight! We head back to the men's action.

Calvin Tankman wastes no time with a few right-hand shots as the match begins. Alexander James doesn't successfully take Tankman down on his feet. Tankman rolls through with a big swing - it misses Alexander's face. Tankman is in the mounting position. James switches positions by trying to grab Tankman's arm. Tankman slips out of James' rear-naked chokehold. Tankman finds his positioning temporarily with a powerful suplex. James attempts a cross arm breaker - Tankman sets himself free by hoisting James up. It becomes a slugfest, as both men lay a series of forearms and knee strikes. Tankman's power outweighs James' ability to stay alive in the match. Therefore, the referee calls for this match to end via knockout. Tankman wins the match.

The battle of the big men continues!

Erik Hammer tees off with a series of shots before going for a single takedown. Hammer escapes Kal Jak's catch style waist lock. Jak pounds Hammer right in the kidneys. Hammer rolls through with some shots of his own. The referee moves them back over to the center of the ring. Jak goes for another takedown - Hammer escapes with some lethal back elbows. Hammer cranks on Jak's neck with a crossface before landing a few palm strikes towards Jak's face. Both men are up. Jak's power is on display with a thunderous power slam. Hammer rolls back in the ring. Jak puts Hammer in a front face lock. Hammer looks for a double wrist lock. Jak escapes by driving his knee into Hammer. After some back and forth roll throughs, Hammer finally gets his double wrist locked in. Kal Jak taps out. Hammer wins.

The OG of Bloodsport, Tom Lawlor, makes his way to the ring for his scheduled match!

Tom Lawlor goes right for a single leg takedown right after the bell rings. Both men make their way back to a standing position. Lawlor attacks the hamstring, which leads towards some more blows. Homicide spits towards Lawlor's direction. He walks right through Lawlor's strikes. Homicide takes over the match with three big chops. Lawlor fights back with a melee of forearms. Homicide traps Lawlor's leg for an STF. Because he can't lock in the STF fully, Homicide just sends Lawlor over his shoulders with a suplex.

Lawlor finds his defensive side again, and both men go to town with a series of forearms. Homicide catches Lawlor with a headbutt. Homicide floats over on Lawlor with what looked like a border stretch. Lawlor breaks up his chances by drafting Homicide's leg. Homicide stomps away. The referee checks in on Lawlor to see if he can still compete. He says he can. Lawlor cranks Homicide's neck with a choke. Homicide escapes with an exploder suplex. Lawlor escapes Homicide's Cop Killer. Lawlor puts Homicide in a tight half-crab. Homicide taps. Lawlor picks up his big win at this event.

The Filthy one gets the submission victory over the legendary wrestler.#BLOODSPORT pic.twitter.com/fbhvMR4jls

Following that bout, "The Walking Weapon" and "The Canadian Bulldog" are set to collide next!

We see Davey Boy block Josh Alexander's attempt at a single leg takedown as the match begins. Davey Boy looks for a double wrist lock. Alexander reverses it. Alexander gets caught at the edge of the ring. They restart. Davey Boy smashes his foot into Alexander's back. Alexander rolls through and mounts himself on top of Davey Boy with a right hand. Davey looks for another double wrist lock - he doesn't get it locked it. Alexander falls into Davey's trap with a sharpshooter. Davey lands a nice and powerful right hand, which sends Alexander down. Davey Boy grabs the upper hand with a destructive Liger Bomb. The referee calls for a match stoppage via knockout. Davey Boy gains his third win at Bloodsport!

Lindsay Snow slides right towards Allysin Kay's leg for a single takedown. Kay ducks out of the way and sends Snow crashing on the mat. Snow counters and tries to look for a cross arm breaker, Kay turns it around with a kick to the midsection. Snow switches position from a wristlock to an ankle lock. Kay escapes. Snow swings for the fences. Kay flips her over to go back to a standing position. Snow fires back with a series of hard elbow strikes, which proceeds towards another ankle lock. Kay taps out. Lindsay Snow becomes the first Women's Tournament winner in Bloodsport history!

Post-Match: Josh Barnett awards Snow with her own personalized trophy.

And now, our main event!

The fans in the audience all chant "Moxley" in unison before the match begins. After the bell, Jon Moxley and Chris Dickinson test their strength. Moxley backs Dickinson towards the apron. Moxley blocks Dickinson's kick attempt, then proceeds to take him down on the mat. Moxley grabs hold of Dickinson's left arm for a lockup. Dickinson rolls through. Moxley and Dickinson catch each other with double leg locks. Both men restart. Moxley looks for a single leg takedown. Dickinson blocks it. Dickinson wraps his legs around Moxley's throat. Moxley fights him off with two hard elbows. Moxley launches Dickinson outside towards the ring post.

Moxley mounts Dickinson once he returns in the ring. He locks in a cross arm breaker, but Dickinson escapes with a series of jabs. Moxley goes right after Dickinson's wrist. Dickinson strikes out of it with a few kidney shots. Moxley sends Dickinson out of the ring again. The referee begins the count. Moxley looks for a Gotch Piledriver - Dickinson puts all of his weight in his feet to block it. Dickinson shows off his strength with a German Suplex. Moxley is rocked. Dickinson looks for a kneebar. Both men spill towards the outside. They both get back in the ring and exchange heavy blows in the middle.

Dickinson takes a knee after a powerful headbutt. Dickinson folds Moxley in half with two suplexes. Dickinson connects a high kick, then climbs on top of Moxley to land more forearms. Moxley does not quit! He finds his footing again with a knee strike, followed by a chokehold. The AEW Champion prevails in this match!

He gives the thumbs up to let the ref know he's okay after that hellacious war.

Post-Match: Moxley grabs a microphone and gives a quick shoutout to the fans. Chris Dickinson and Moxley shake hands before the show concludes.

"We will make sure indie wrestling continues to GROW and PROSPER." #BLOODSPORT pic.twitter.com/K48Wxt2LDz

That concludes Bloodsport 3. Thanks for watching!