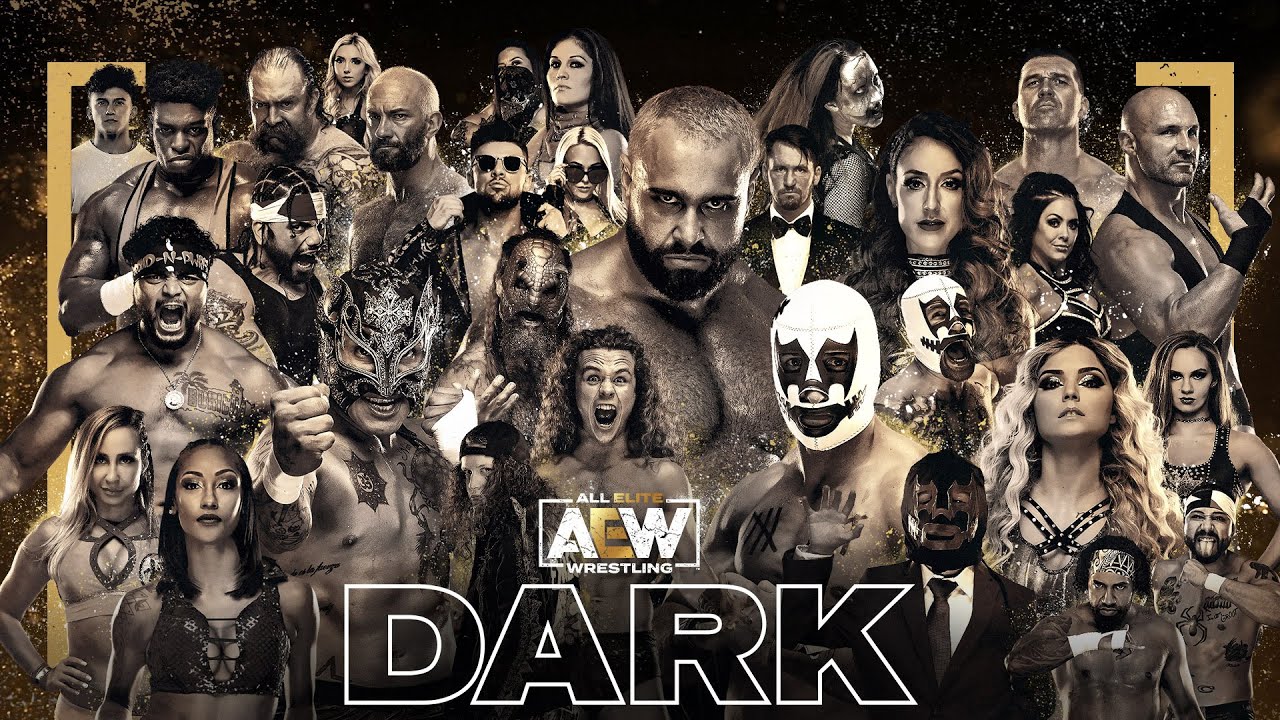 Welcome to Wrestling Inc’s recap of AEW Dark, which airs every Tuesday at 7 PM EST on AEW’s YouTube Channel. Be sure to chime in on your thoughts about tonight’s show in the comments section below. Additionally, share our live coverage through social media. Make sure to click the REFRESH button to continue to get the most current up to date coverage. Below is what’s on tonight’s agenda:

Fuego tries to chop Miro down with some leg kicks. He’s unsuccessful as Miro knocks him down with a huge clothesline. Miro hits a drop elbow then a kick to the mid-section. Miro calls Charles Taylor over to clap, but Fuego is able to knock Miro down with a dropkick to Miro’s knee. Fuego can’t hit the tornado DDT, and Miro hits a Samoan Drop. Miro knocks Fuego down with a pump kick. Miro locks in Game Over, and Fuego taps out.

Jungle Boy and Lee Johnson start things off with a quick back-and-forth exchange. Johnson and Jungle Boy share some respect as Solow tags in and locks up with Jungle Boy. Jungle Boy gets Solow down with an arm drag and tags in Luchasaurus who knocks down Solow with a kick to the chest. Solow escapes from the corner and tags in Johnson. Johnson tries to create some separation from Luchasaurus, but Luchasaurus catches him with a side back breaker. Jungle Boy tags in and leaps over Luchasaurus for a senton, cover, but Johnson kicks out.

Next up it's Jurassic Express vs. Aaron Solow & Lee Johnson in tag-team competition on #AEWDark.
WATCH ➡️ https://t.co/a7OvZHIrXM pic.twitter.com/nBLwFXLye2

Terrell and Kazarian start things off as Kazarian quickly drops Terrell with a drop toe hold and as a headlock wrenched in. Kazarian tags in Daniels. Terrence makes a comeback as he and his brother hit a combo move on him. Terrell is beating Daniels in the corner, but he counters and SCU use their experience to get the better of TNT.

Kazarian on fire taking out both Hughes brothers. He hits a leg drop and signals a tag for Daniels. Powerbomb / neckbreaker combo, cover but Terrence breaks up the cover. Kazarian and Terrence exchange right hands. Kazarian evades and hit a top leg drop / sideslam combo, cover 1-2-no! Daniels tries to help out Kazarian, but TNT has SCU in opposite corners beating them down. SCU bump into each other after an Irish whip counter. SCU avoid the 3D, and hit Best Meltzer Ever for the win.

KC Navarro & M’Badu vs. The Butcher And The Blade (w/The Bunny)

Butcher and Blade quickly take the fight to their opponents. Bunny has the ref distracted as Blade chokes out Navarro. Butcher comes in and lays out Navarro with a backbreaker. Navarro is sent to the outside as Bunny takes advantage and gets more shots in on Navarro. Butcher and Blade are beating down Navarro. They hit an assisted powerbomb, cover and M’Badu breaks up the pin.

Butcher throws Navarro into the corner inviting M’Badu to tag in. Butcher goes into M’Badu, but M’Badu counters and hits a diving splash. He gets more strikes in and another diving splash. Butcher creates some distance and drops M’Badu with a clothesline. Butcher and Blade hit a neckbreaker / powerbomb combo and pin him together for the win.

Winners: The Butcher And The Blade

Fenix and Black exchange wrist locks and roll ups. Black rolls into a rope break to avoid the kneebar. Fenix gets the better of the test of strength as Fenix wrenches in an abdominal stretch. Black gets a hip toss, but Fenix flips out to avoid trouble. Fenix and Black shake hands, but Black quickly slaps Fenix and gets a chop in, but Fenix answers with his own chop.

Fenix goes for a springboard forearm, but Black baits him and hits a suplex. Fenix quickly kicks out and rolls to the outside. Black lands some shots and tries to wear Fenix down. Fenix lands some leg kicks to create some distance. Black counters a leg kick with a Dragon Screw and locks in a single leg crab and transitions into a bow and arrow. Fenix rolls into a cover, but Black kicks out.

Fenix lands some elbows and strikes in the corner. Black responds by throwing Fenix into both corners and hits an atomic drop then a backstabber, cover, 1-2-no! Fenix tries for some up kicks, but Black lifts him up. Fenix escapes and hits some powerful chops. Fenix rolls over the tope, and Fenix hits a springboard side kick. Fenix rolls through the ropes and nails a hook kick! Fenix bounces off the ropes and locks in a Muta Lock. Black manages to crawl to the ropes to force a break.

Fenix nails a series of hard chops in every corner. Black responds with his own chops as the two tee off on the other. Black catches Fenix with a low-angle German suplex. Black hits a powerbomb, cover, 1-2-no! Black locks in the Texas Cloverleaf. Fenix rolls out and gets sunset flip, but Black kicks out. Fenix builds some distance with a boot. Fenix misses the moonsault but rolls into a cutter! Fire Thunder Driver gives Fenix the win.

Shanna and King with a strong collar and elbow lock up. Shanna gets the better of King with a few arm drags then a head scissors takedown followed up by a step-up enzuguri, cover, but King kicks out. Shanna baits King to the ropes and rolls outside. King tries to drag Shanna out, but Shanna counters and spins King around for an elbow strike. King gets Shanna caught in the ropes and lifts her neck first.

King then hits a few chops and kicks in the corner. King hits a double knee strike, cover, but Shanna kicks out at two. King locks in a Dragon Sleeper, but Shanna gets up to her feet and locks in her own Dragon Sleeper. Shanna lands her own strikes on King in the corner, a jumping clothesline then a jumping Stunner, cover, but King kicks out two! King gets off a few elbows then a head kick. King goes up top, but Shanna meets her with an uppercut. Shanna goes up top and gets a double stomp with King hanging on the ropes. Shanna sets up King for the Tiger Suplex for the win.

Baker quickly knocks Havok face first and talks some trash. Baker showing her experience taking Havok down in a side headlock. Havok powers out and gets her own side headlock in. Baker immediately counters into a head scissors. Baker prevents a counter and transitions Havok into a suplex and kisses to the camera as she takes her time.

.@BrookeHavok not only makes her #AEW debut. But, makes her wrestling debut right now as she takes on the tough Dr. @RealBrittBaker D.M.D on #AEWDark ➡️ https://t.co/a7OvZHIrXM pic.twitter.com/ANMOgjP1Q9

Havok takes advantage and hits some strikes on Havok. She gets a tiaris off then drops Baker with a dropkick. Baker causes Havok to lose her balance off the middle rope, and Baker wears down Havok’s leg and nails a curb stomp on Havok. Reba hands Baker the glove as she gets the Lock Jaw in, and Havok taps out immediately.

– Santana and Ortiz are backstage and cut a promo about how people say “new year, new me”. They issue out a warning saying it’s their “time to eat.”

Lee Johnson comes out and prepares for his walk on the red carpet. Aubrey fives Lee a 9, Brandi also gives Lee a 9 and Jerry Lynn fives Lee a 9 as well. Next up is Peter for his walk on the red carpet. Aubrey and Brandi give Peter a 9. Jerry requests for a replay and is granted one as an infraction is shown. Jerry is conflicted and instead of showing a 9, he flips it over for a 6 giving Lee Johnson the win. Cezar Bononi sucker punches Johnson! Jerry is not happy as Peter and Bononi walk out.

Verna calms down Ryzin and starts things off against Ortiz. Ortiz quickly drops Verna with a dropkick then a butterfly suplex. Santana tags in and gets a leaping back elbow in the corner followed up by a suplex. Santana nails a few kicks then tags in Ortiz. Verna counters but runs into an assisted Death Valley Driver for the win!

Davienne charges into Conti, but Conti counters and gets a body scissors then a bridges. Davienne counters into a pin. Conti kicks out and locks in a kneebar. Davienne reaches for the ropes. Davienne hits a kick then slams Conti. Sliding clothesline, cover but Conti kicks out at two. Davienne takes too much time as Conti gets off a rising knee strike. A couple of judo throws gets Davienne to the outside. Davienne baits Conti to follow her, but Conti counters and gets a submission on the ropes. Conti hits a series of clotheslines and hits a knee strike in the corner. Conti gets sent up top. She leaps off and gets off a pumping boot. Conti blows a kiss and locks in a chokehold forcing Davienne to tap out.

Jaz circles around Ten as they size each other up. Ten knocks Jaz down with a shoulder tackle. Ten nails a wheelbarrow German suplex! Ten tries to counter off the corner, but he clutches at his knee. Jaz takes advantage with a chop block and starts to wear down Ten’s knee. Jaz has Ten’s knee grapevined. Ten powers out and tries to build some distance. Jaz counters and continues to work the knee, cover but Ten kicks out at two each time.

Jaz hits a knee crusher then wraps Ten’s knee in the corner rope. Ten baits Jaz and throws him in the corner. The two trade strikes. Jaz walks into a clothesline then gets off a huge back body drop. Ten hits a huge spinebuster. Ten hits a ripcord clothesline to the back of Jaz’s head for the win.

Limelight quickly sweeps Maluta. Limelight then gets a high-stack pin, but Maluta quickly kicks out. Maluta catches Limelight by surprise and lands some strikes in the corner. Limelight charges into the corner and counters into an enzuguri then an arm drag sending Maluta to the outside. Limelight then hits a tornado plancha! Limelight rocks Maluta with a PK for the win.

Ivelisse gets some quick strikes off. Allure catches Ivelisse with a basement dropkick, but Ivelisse follows up with a shoulder to the mid-section. Ivelisse hits a shoulder capture suplex, cover and Allure kicks out at two. Ivelisse starts slamming Allure’s head onto the mat. Diamante takes advantage of a distracted ref and nails a shot on Allure. Ivelisse wrenches Allure and has her tied up in the middle of the ring. Allure rolls out and tries to fight out. Ivelisse responds and hits a question mark kick on Allure’s back, cover but Allure is given enough time to cover.

Northern lights suplex, high bridge but Allure kicks out again. Allure hooking the double underhooks. Allure builds some distance with a jawbreaker. Running elbow strike in the corner and a flurry of strikes. Allure hits a cazadora into a facebuster, cover but Ivelisse kicks out at two. Allure catches some strikes and hits an elbow. Ivelisse catches a strike and hits a knee strike. Tornado kick by Ivelisse gives her the pinfall victory.

– Excalibur previews tomorrow’s episode of Dynamite as Dark goes off the air.

Previous
Drew McIntyre On Why He Doesn’t Want The Fiend Involved With The WWE Title Chase
Next
Title Match Nixed From This Week’s WWE NXT?
Follow @WrestlingINC