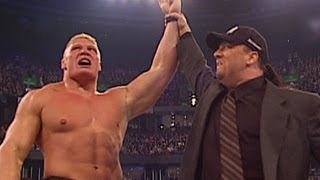 Parker Boudreaux, a 22-year-old football player who has drawn comparisons with Brock Lesnar, was reportedly backstage at this week’s WWE NXT, according to Fightful Select.

Although the reason for Boudreaux being backstage at Capitol Wrestling Center is unknown, the offensive lineman recently told Lucha Libre Online he “will be joining a professional wrestling company” soon. Boudreaux, a junior at UCF, has reportedly not declared for the 2021 NFL Draft.

Boudreaux said that he appreciates the Lesnar comparisons but plans to be his own person.

“I think Brock Lesnar is a tremendous athlete and while I take it as a compliment to be told that we look alike, I hope people see my own identity and uniqueness in professional wrestling,” said Boudreaux. “As well as seeing me be my own person. I am unique. #TheNextBigThing.”

Boudreaux also referred to himself as a “Paul Heyman Guy” during the interview.

Besides Heyman, the likes of Jim Ross and Gerald Brisco have touted Boudreaux as a potential star in the wrestling business. Ross said he sees “big money” in Boudreaux  down the road.

Earlier this month, Heyman retweeted a picture of Boudreaux and said it’s not a prediction but a spoiler that 2021 is “going to be something special” for Boudreaux.

The Next Big Thing… coming soon????

His tweet is not a prediction. It’s a spoiler.