Coach Recalls His First WWE Assignment With The Rock 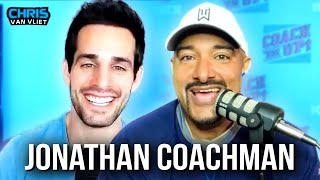 Jonathan Coachman spent over 10 years in WWE under two different stints and within a variety of roles. He was a commentator, an occasional wrestler, an interviewer and may best be remembered for being the butt of many of The Rock’s jokes.

Coach was asked to recall his first WWE assignment and it coincidentally involved The Rock making fun of him when Coach was interviewed by Chris Van Vliet.

“It was great. Since I’ve been traveling for months, I kind of felt like I’ve been there. First time I was on the air and somebody just posted it this week: January 8, 2000, me and The Rock. People say he’s the greatest and nicest guy. Personally, he is, but professionally, he’s a savage,” admitted Coach. “He’s an absolute, ‘I’m going to protect my character. I’m going to do what’s best for business. I’m going to make the most money.’ That’s who The Rock is.

“They came in and said, ‘Coach, we want to do something different.’ At the time, he would get everybody. So, they said, ‘We want to reverse it. You’re going to start asking your question and nobody has seen you before. The Rock’s going to stop you and say, ‘Who are you?’ ‘So, you’re going to be trepidatious. You’re going to say, ‘My name is Jonathan Coachman, but everybody calls me The Coach.’

“’Coach! The Coach of what? The Coach of a little girls’ softball team?!’ Then, he goes into his promo. In the end, he says, ‘So, why do they call you The Coach?’ Then, I’m comfortable and he goes, ‘It doesn’t matter!’ He didn’t have to do that and he wanted to put me over. After one night, we walked out behind the building. All of sudden, I’m hearing my name. For the first time in my life, I’m hearing somebody scream my name. So, that was awesome.”

Early in his career Coach also had to fill in for a WWE legend unexpectedly when the company was opening a restaurant/nightclub in Times Square. He recalled that moment which also involved The Rock making an appearance.

“Do you remember WWF: New York? God rest his soul. One of my favorite human beings, Howard Finkel. He was scheduled to do all of the announcing. They had built this little stage. They closed down Times Square. It had to be 20,000 people; it was packed. Imagine January – you can see your breath and there’s nothing like it,” recalled Coach.

“All of the people from Access Hollywood and Entertainment Tonight, they put them on this little box. They have to stay there and you do the interviews. The wrestlers just walk down. They come up to me and said, ‘Coach, we need you to introduce the guys because Fink is stuck in traffic.’ I said, ‘You’re kidding me? Who is the first one?’ They go, ‘Well, The Rock is the first one.’

“So, I get up on the stage and of course, most people still didn’t know who I was. They say, ‘You suck! Get out of here!’ Even now in 2021, the way New York City is – to think back to how it was on this night – that’s the memory I like. I said, ‘Ladies and gentlemen, please welcome the most electrifying man in sports entertainment, The Brahma Bull, The Rock! They hit his music. Times Square lights up and people are going bananas.

“He gets out of his limousine and I remember it like it was yesterday. He has this red jacket on, a black turtleneck, sunglasses. I said to myself, ‘This is the coolest human being I’ve ever seen in my life.’

“I learned so much from him. I love him so much and I respect him so much. Nobody could be happier for what he has accomplished because I do believe is singlehandedly the most talented human being I’ve ever been around.”

Coach was there for The Rock’s meteoric rise, going from being the most electrifying man in sports entertainment to being the biggest movie star in the world. He points to The Rock’s work ethic for his success and also says that Rock has done so much to provide for other people as well.

“When you look at the things he does and how he uses his fame and all of the good things he does for other people, the thing he says more than anybody is, ‘I want to be the hardest worker in the room,’” said Coach.

“When you look at what I do and it’s not on his level, but I’m working every day somehow in my mind and it’s based on what he does and what he taught me, being around him and watching him. He’s the only superstar that can come and go as he pleases because Vince knew whatever it is that The Rock was doing at that moment, if he wasn’t in the building, he was at the gym working out. He was signing autographs for the company.

“He was always doing something and now, to see him as the biggest movie star in the world, he doesn’t have to do that stuff. He doesn’t have to start all these different companies and you hear people criticize sometimes. ‘Oh, Rock’s always promoting this.’ Guess what those promotions do. They supply jobs, livelihoods, and they take care of people.”

Whenever you work for WWE for almost a decade like Coach did during his first stint, you’re then typecast as a “wrestling broadcaster” instead of just being a broadcaster. Coach talked about trying to break away from that mold as his dreams and aspirations went far beyond pro wrestling.

“I do a lot of speaking to colleges and high schools now. I believe that if you stay in your house and you don’t put yourself in front of people, you’re never going to get anything. I started applying because I knew after 2006, I was traveling so much and I was starting to get burned out. I was getting over it. In addition to wrestling, I was also doing work in the studio. I was really tired, and I said, ‘My dream was not to do pro wrestling. My dream was to be a national sportscaster.’ The longer I go here, the less chance I have of that happening,” admitted Coach.

“I started applying and I would get, ‘We really like you. We think you’re talented. Call us when you leave us WWE.’ I was at a point where I couldn’t go back to making $30,000 a year. That just wasn’t feasible for me.”

If you use any of the quotes in this article, please credit Insight with Chris Van Vliet with a h/t to Wrestling Inc. for the transcription.

Previous
Konnor Explains Why The Ascension’s Work With Breezango In WWE Fizzled Out
Next
NJPW The New Beginning In Nagoya Results: New Champion Crowned
Follow @WrestlingINC