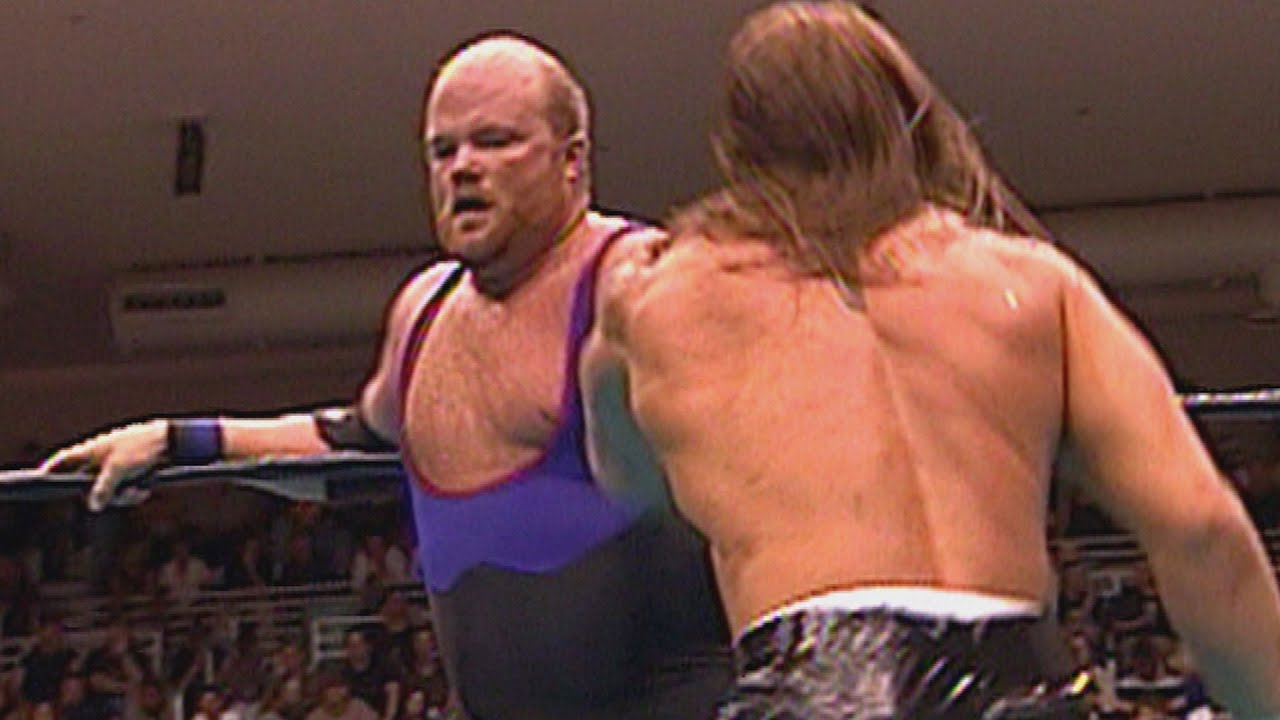 C.W. Anderson was a staple across many pro wrestling promotions throughout the 90s and 2000s. He got his first big break in ECW in 1999 after training at WCW’s Power Plant in Georgia. However, despite training at WCW’s wrestling school, Anderson never got an opportunity with the promotion due to his physique and appearance.

Anderson talked more about that and revealed who told him he wasn’t cosmetic enough for TV when he joined The Wrestling Epicenter.

“Paul Orndorff and James J. Dillon. I was in the last match there, and man they had the Natural Born Thrillers there, Elix Skipper, Lash LaRoux, Mike Sanders… Guys like that. They were all under contract; I was not,” said Anderson. “I got to wrestle with a good buddy of mine, a guy I traveled up and down the road with. It was inevitably through him, through Lodi, through Raven, that I got my job with ECW. He was doing pull overs and stuff that Kid Kash and I would be doing later in ECW.

“We had an ECW match there [at the Power Plant]. Brad Armstrong came over to me and Toad, that was his wrestling name, said, ‘Man, that was awesome!’ Guys were high fiving! Then, Paul Orndorff and JJ Dillon walked over to me and said, again, cosmetically, I was about 250 pounds then, 255? They said they didn’t think I had any kind of look, that WCW was a cosmetic company and not as much wrestling, that I was an okay wrestler but their opinion was that I couldn’t make any kind of waves in WCW.”

ECW was the alternative wrestling promotion in the 90s to the more mainstream WWF and WCW. However, many people who worked for the latter two promotions look down on ECW and dismiss it because of the violence.

Two people in particular – Jim Cornette and Eric Bischoff – have especially come down hard on ECW on their respective podcasts over the years. Anderson shared his thoughts on those two and gave an anecdote on how much pro wrestling meant to him.

“I’ll start out with Jim Cornette. I was a huge fan of Jim Cornette. I still am! I listen to snippets of his podcast every week. I have nothing but respect for Jim Cornette and his opinion. I’ve always valued his opinion,” revealed Anderson. “Eric Bischoff? I think I met him on a couple of occasions. But I don’t really know him like that. But… some people don’t like the stuff that we did in ECW. I get it. It wasn’t their forte. They didn’t grow up with it. They like a more old-school wrestling style. To others, it didn’t make sense and didn’t tell good stories. We were ladders, tables, and chairs. But the hardcore wrestling wasn’t about tables, ladders, and chairs. It was about us going out there and wrestling our ass off knowing we weren’t getting paid! Knowing we were back-dated pay and owed checks. Knowing we were wrestling injured.

“For instance, one night I had to wrestle Raven and New Jack on the same night and my back was out on me. I remember Paul [Heyman] and Bill Wiles carrying me to the Gorilla Position, my music hit, and I went out there and wrestled Raven and then New Jack. I came to the back and collapsed and Road Kill put me in the back of his van and took me to the airport. That is the hardcore style that I remember.

“Guys from WCW, guys from WWE would never have wrestled like that without getting paid. They were spoiled! They were used to getting catered and used to making six figures when I was making $75 a night paying my own way. The legacy to me and the fans, you know, I can’t get in the ring now, 20 years later, without the crowd chanting ‘ECW, ECW!’ Most, I won’t say most but some of the fans were either very young or weren’t born yet. Hey, that’s thanks to the WWE Network who still airs us. A lot of the older guys don’t like us. That’s okay; that’s their stuff. But there is a volume of fans that do because of the cult that we were. We were like the Rocky Horror Picture Show of wrestling! You don’t hear people go to shows chanting ‘WCW’ or ‘WWE’. But every show I go to, you hear, ‘EC-Dub, EC-Dub!’ and that is because of the hardcore, the heart and the soul that we put into it.”

There have been several documentaries on ECW that have come out since the promotion closed including The Rise and Fall of ECW which was produced by WWE. It featured interviews with former ECW wrestlers, who were under WWE contract, and some saw it as not a legitimate representation of the promotion since WWE decided what to edit out of the interviews.

Anderson gave his thoughts on these ECW documentaries and what would have been a better representation of what it was like working for the company.

“Everybody that watches the documentaries, and not that BS documentary that WWE put out about the Rise and Fall. That was such a BS documentary because you were seeing it from the view of the people that WWE took care of, like, that Paul took care of. How about interviewing guys like myself, Danny Doring, Chris Chetti, Road Kill, Mikey Whipwreck? …The ones that were left behind. The ones that had to go somewhere else, that had to go get real jobs. Some guys just quit wrestling over not getting paid and the lies we were told by Paul,” said Anderson.

“I remember one night we had the biggest house show the company ever had in Canada. I remember because I wrestled Rob Van Dam. Paul told us he couldn’t pay us because it was in Canadian! I remember he gave us this speech and I still went out there with Rob Van Dam, I don’t remember if we were main event or not, and we went 45 minutes and I separated my shoulder for the ECW fans. That’s the hardcore. That’s the legacy and people aren’t going to agree with me and that is okay. But people that went to the shows know the blood, sweat, and tears we poured into this company when we were getting lied to by Paul Heyman and still going out there and performing for fans.”

On top of ECW often getting dismissed by those who were in other promotions, the former ECW wrestlers themselves often didn’t get the credit they deserved for their abilities. They were more than just glorified stuntmen and Anderson hit back at people dismissing his talent.

“There was a guy from ECW who went on to be a long-time champion in WWE. He wrestled Steve Austin, Ric Flair, and a lot of top guys, and he told me that I was one of the best guys he was ever in the ring with,” revealed Anderson. “Dave Hebner once told Steve Corino and I, ‘You guys are my favorite guys to ref.’ We were like like, ‘You mean nowadays in this promotion?’ He was like, ‘No, ever!’ I know my talent speaks for itself.

“So, again, Jim Cornette, I respect that. That is his opinion. Midnight Express? Bobby Eaton was and still is my idol! He is the guy I patterned my style after; it wasn’t Arn. It was Bobby because I wanted to be able to go out there and wrestle Ric Flair or a broom stick and have a 5-star match!”

One of Anderson’s last matches in ECW came at the promotion’s final pay-per-view, Guilty as Charged in 2001. He took on Tommy Dreamer in an “I Quit” match in which Dreamer won after tying a cable around Anderson’s head and pulling backwards on it, forcing Anderson to quit.

Despite the loss, Anderson remembered the match fondly when asked if it was his career highlight.

“Absolutely! That is the match that I’m most known for. Whoever watches this, just know that that night was my 30th birthday! That match meant so much to me. They were making me the next champ at ECW and you’re right; it didn’t look like a company that was going under because we had no idea that it was going out of business,” admitted Anderson. “I never got paid for that ‘I Quit’ match! Rob Van Dam got like $10,000 or $20,000 of money owed to come back that night and wrestle – and he wasn’t coming back, that is what I was told.

“Wrestling Tommy on pay-per-view, especially in an ‘I Quit’ match was special. Some people said it was going to be difficult. When you think of ‘I Quit’, you think of Magnum [T.A.] and Tully [Blanchard at Starrcade 1985]. And, it really upsets me that when some people talk about ‘I Quit’ matches, our match isn’t put in there. Most people talk about Magnum and Tully, me and Tommy, and then you’ll get the WWE marks and they’ll go on about the ‘I Quit’ matches there. And then, of course, you’ll always get the Terry Funk versus Ric Flair match thrown in…

“Tommy said, ‘If I think it is good, I’m going to shake your hand.’ When he shook my hand at the end of that match, and you can’t really hear it unless you’re listening to the audio, the fans are chanting,’ EC F’n Dub’ as I walk back. I’m getting a standing ovation from over 3,000 fans because of that match!”

Previous
Will Hobbs Recalls Being Under A “Tier 0 Contract” With AEW
Next
NJPW Road To The New Beginning Results: Big Six-Man Tag Main Event