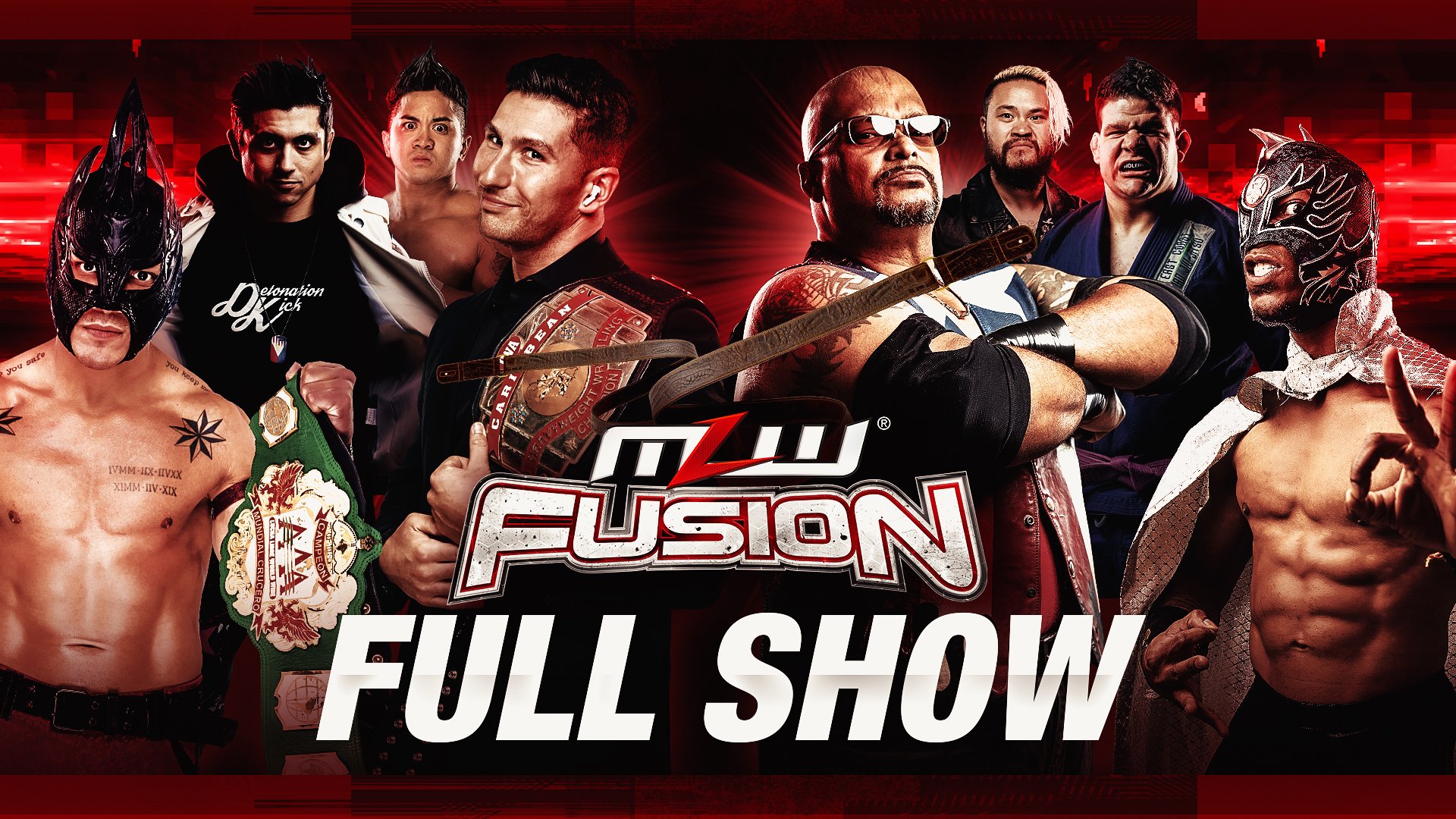 Josef Samael interrupts the opening credits to issue a warning towards Injustice for their blind attack on CONTRA Unit last week. He says his unit, including their newest soldier Daivari, will be lurking in the shadows.

Both men shake hands after the bell rings. They go right for a lockup. Laredo Kid backs Zenshi into the corner. They reset. The same thing happens again, but this time, it’s Zenshi who backs Kid into the corner. Kid grabs wrist control. Zenshi escapes and reverses the hold. Kid rolls through. Zenshi tosses Kid with a suplex. He wasn’t able to connect a dropkick on the Cruiserweight Champion.

Zenshi slingshots through the ropes with a high shooting star press off the apron connects onto Kid. He looks for the first cover in the match. Kid kicks out at two. Kid hoists Zenshi up on his shoulders. Zenshi escapes with a big right. Kid takes flight off the top rope with a missile dropkick. Zenshi rolls out of the ring.

WOW… What innovation from Zenshi.#MLWFusion

Kid climbs the ropes and misses a moonsault off the ropes. He rolls through with a beautiful Michinoku Driver. This shakes up Zenshi’s offense at the moment. Kid keeps the pain train rolling with a 450 splash off the apron. Kid rolls Zenshi in by the 15th count. Kid gets a two count near fall. Kid drives Zenshi’s head with another Michinoku Driver. Kid catches knees after his second rope moonsault. Zenshi fires back with a jumping knee strike and a somersault senton. He continues his high flying momentum with a shooting star press for only a two count!

Zenshi lands a roundhouse kick. Kid flies with what looks like a Canadian Destroyer in the center of the ring. Zenshi sneaks his foot underneath the bottom rope for another near fall save. Kid hooks the leg again for another two count. Zenshi takes Kid off balance with a pele kick. He rolls the Cruiserweight Champion through with a snapmare off the top. Zenshi hooks the legs, 1-2-no! Kid cuts Zenshi off the top momentarily. He finds his footing again on no man’s land. Kid sends Zenshi flying with a huge Spanish Fly. Kid hooks the leg, 1-2-3, Kid retains his championship!

Post-Match: Laredo Kid says that he’s the best Cruiserweight Champion in the world, and he just proved it. His next goal is to become the next MLW World Heavyweight Champion.

"I want to be a double champion right here in MLW."
– @LaredoKidPro1#MLWFusion

We look back at Injustice’s sneaky attack on CONTRA Unit last week. This week, Myron Reed has nothing left to lose, as he challenges MLW’s most dangerous stable to come and fight him soon.

"Now it's time for war!"
– @TheBadReed#MLWFusion

After losing their MLW World Tag Team Championship two weeks ago, the Von Erichs are back in Kauai, strategizing over what their next move is going to be. Their father, Kevin, is training them even harder for the grand prize once again.

Kevin Von Erich with some much needed advice for Ross and Marshall.#MLWFusion

The Tag Team Champions Los Parks are awaiting who their challengers will be. Up next, TJP and Bu Ku Dao will face Violence Is Forever. Whoever wins that match will face Los Parks for the titles next week!

Moments ago, Gino Medina made his return back to MLW! He’s back because he wants to see how the main event plays out. He would like to see Savio Vega whip Richard Holliday into shape.

Moments ago Gino Medina arrived to the building. But why?#MLWFusion

Next week, Alex Hammerstone will put his National Openweight Championship on the line against Mads Krügger in a Baklei Brawl. Krügger releases a propaganda video, notifying Hammerstone that his time as champion is coming to an abrupt end.

After taking part in ACH’s attack and his controversial call as the referee in the Von Erichs/Los Parks match two weeks ago, Tom Lawlor tries to clear his innocence on these allegations made against him. His Filthy Island event is currently suffering some financial difficulties. MLW will release more information about this soon.

Speaking of Team Filthy, his team is in action next!

Bu Ku Dao and Dominic Garrini start the matchup. Dao gets tossed into the corner. Dao gets back up. Dominic tries to trap Dao. He does so briefly but tosses Dao again to the other side. Dao keeps hold of Dominic’s legs. Dominic scoots over to make a tag out to Kevin Ku. Dao finds a small opening for a hurricanrana turned facelock. Dao gets a tag made by TJP. TJP hoists Dao up with a senton on Kevin. TJP hooks the leg for a cover. Kevin kicks out at two.

TJP doesn’t get the octopus submission locked in fully. He turns it around with a crucifix pin for another two count. Dao makes his return. TJP throws Dao onto Kevin for another two count. Dominic tags himself back in. Kevin and Dominic join forces with a European uppercut/German Suplex combo. Dominic traps Dao with a leverage suplex. He walks over to make a tag out to Kevin.Kevin and Dominic lay double kicks to the back of Dao. TJP is firing Dao up for a tag. Kevin lights up Dao’s chest with several knife-edge chops.

Vicious combination from Violence is Forever!#MLWFusion

Dominic makes his way back in. He taunts TJP by choking his partner out. Dominic drops Dao on his knee. Kevin fires in with a big lariat. Dao turns it around with a crucifix. He reaches over for a tag to TJP. TJP is on fire the moment he steps into the ring. He charges over to Kevin with a tornado DDT. He takes both men out with an arm drag/head scissors takedown. TJP slams Kevin over and over with several slams. Dominic pushes TJP off the top rope. He crawls over to tag in Dao. Dao locks in a crossface on Kevin. TJP wraps himself around Dominic with the octopus submission. Dominic and TJP come crashing down on top of Kevin and Dao to break the holds.

Dao comes back with a dropkick. Kevin lands a hard kick. Dominic misses a brainbuster/kick to the skull combination on TJP. Dao flies off the top rope with a clothesline. TJP comes flying in next with the Mamba Splash. Dao hooks the leg on Kevin for the pinfall victory!

They will face Los Parks for the MLW World Tag Team Championship next week!

With the victory tonight @MegaTJP and @BuKuDaoOrDie have now earned a title shot for the MLW World Tag Team Championships NEXT WEEK against Los Parks!#MLWFusion

At a Hospital: King Mo Lawal makes a sentimental message on how he’s concerned about Low Ki’s health still. He wants MLW to ban Low Ki as soon as possible.

Backstage: Richard Holliday says he’s going to take great joy taking Savio Vega’s strap and smacking him on the back with it. He adds that Vega will never outsmart him as a champion.

Richard Holliday with a little message for Savio Vega prior to their "Caribbean strap match" which is coming up NEXT!#MLWFusion

Up next, the Caribbean Strap Match main event!

Here's the tale of the tape for our #MLWFusion Main Event.

**Rules: No pinfall or submission victories. The only way to win is to hit all four of the top turnbuckles. **

Richard Holliday thinks he can get a fast one over Savio Vega in this strap match but it comes with a price.#MLWFusion

Vega gets back up and rocks the champion with a series of shots. Holliday digs his thumb into Vega’s eye to land another blow. Holliday tumbles down with a right-handed clothesline by Vega. Holliday makes his way up to the apron and creates some space with a neck slicer off the top rope. Holliday crashes down on Vega with a big clothesline off the top rope. Vega flips him over from touching the fourth top turnbuckle. Vega touches three of the top turnbuckles before Holliday gets up and prevents him from doing it.

Vega lands a knee drop and wraps the strap around Holliday again. Vega whips away at the champion. He hogties Holliday with the strap. Holliday connects a clothesline for the cover. The referee doesn’t drop down for a count. Both men meet in the middle with a double clothesline. Vega touches three of the corners. The referee prevents Vega from touching the fourth one by standing in front of it and not moving out of the way. When Vega goes over to confront him, Holliday slides over to hit the fourth and last turnbuckle for the victory. Richard Holliday retains his championship.

Post-Match: Alicia Atout meets up with Richard Holliday and the referee of the match. Atout mentions his finish could create some controversy. Holliday doesn’t see it that way. He says he had to retain the title for his consumers in the Caribbean. Savio Vega demands an explanation from the referee as the show comes to an end.