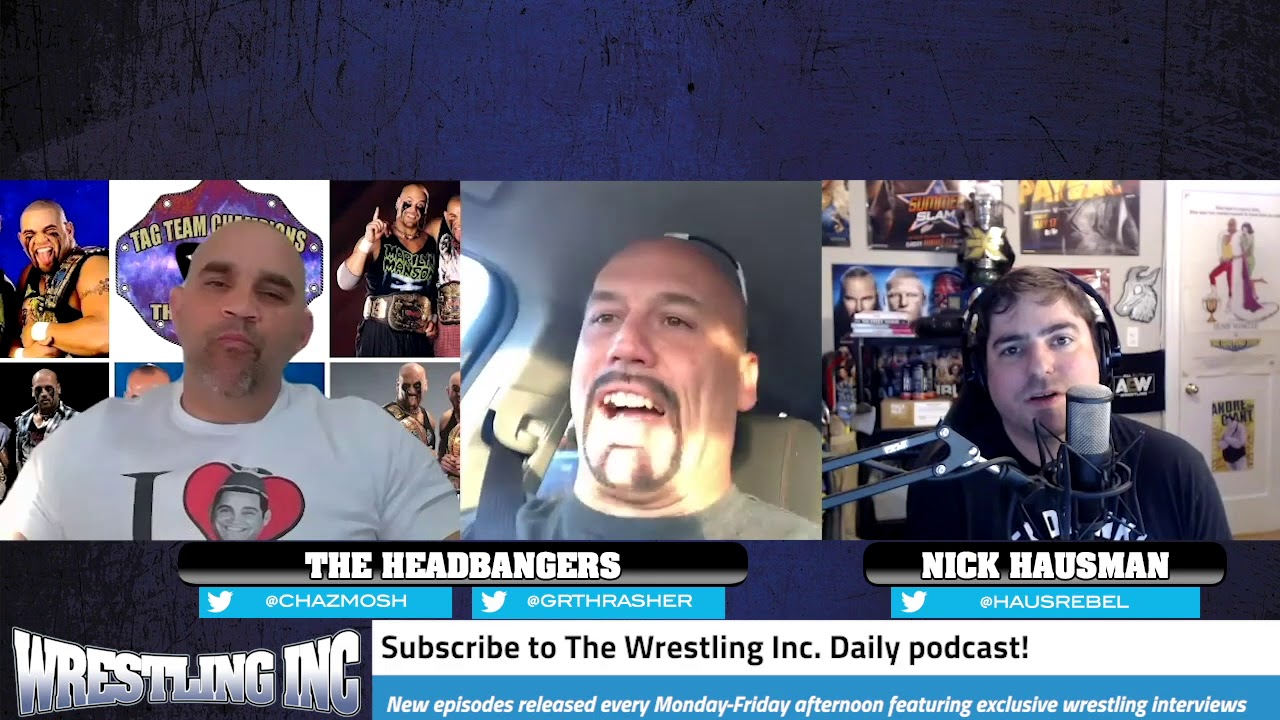 As seen in the video above, former WWE Tag Team Champions The Headbangers, Mosh and Thrasher, appeared on The Wrestling Inc. Daily podcast recently.

During the interview, Mosh revealed that the legendary tag team had aspirations of returning to a major promotion in the near future. They are currently the Atomic Revolutionary Wrestling [ARW] Tag Team Champions.

“I want to do as little as possible,” said Mosh [laughing] when asked about their plans. “We’re doing it [wrestling] as much as we want to do it. If someone calls us, and if we’re available, and the pay is satisfactory, we go.”

Mosh admitted that The Headbangers would love a brief run in NWA or even AEW.

“I’d love to go do a run in NWA, something like that would be fun for a little bit,” he said. “It is what it is now. As for AEW, if the opportunity was good for us, sure. Never say never.”

During the podcast, The Headbangers also delved into the backstage atmosphere after The Montreal Screwjob at Survivor Series 1997.

“For me, I didn’t really catch anything beforehand,” recalled Mosh. “Because we kind of stayed away. We were actually playing with Bret’s kids backstage. I knew there was a little bit of friction going on, but I’m not a big gossiper. As far as really knowing what was going on, I was clueless.”

Thrasher chimed in, “We kinda kept to ourselves, more or less. When Vince was making his way back that way, we were in vicinity and saw him walk in and walk out. Other than that, it was a normal day. I mean, by then, pretty much everyone knew Bret was leaving.”

When asked how The Headbangers eventually made it WWE TV in November 1996, Thrasher explained why it was a completely different era of wrestling back then.

“We got there [to WWE] with the help of Jim Cornette,” recounted Thrasher. “We had territories, took a different path [to get to WWE]. I think we weren’t handled right. Do I still have a chip on my shoulder after all these years? Absolutely.”

Thrasher assured that The Awakening (fka The Ascention) will see a different side to them on Feb. 19 when The Headbangers face them at ARW’s fourth anniversary show.

“All I know is on February 19, The Awakening are going to have a very rude awakening. Because I’m tired of this [narrative] that The Headbangers are a fun and happy-go-lucky guys. I’m tired of that s--t. It’s time to get down and kick the fucking teeth of these people.”

Meanwhile, Mosh recalled the amount of time the team spent on the road, in their car and in hotels without making any money.

“We did that for four years,” he said. “Today, you spend a few years on NXT and go to the main roster. If The Awakening spent four years in NXT, that’s their fucking problem. The amount of time we spent in the territories was more valuable than the time they spent in NXT.”

When asked what it was like to work the territories en route to the WWE, Thrasher said it was “awesome” and prepared them for the big time.

“I mean look who we got to wrestle against? The Rock n Roll Express, The Thugs and other great tag teams that we looked up to when we were coming up as youngsters.”

Thrasher continued, “It’s funny, when we started at Smokey Mountain, Cornette goes, ‘here watch the tapes of Midnight Express and this is what we’re looking for.’ We did that. It was a totally different time. I still prefer the way we broke into the business because we wrestled 5-6 nights a week in various places instead of just Full Sail all the time.”

As noted, The Headbangers defend their ARW Tag Team Championships against The Awakening (fka The Ascension) on Friday February 19th. You can find more info by following ARW on Twitter @WrestlingAtomic.