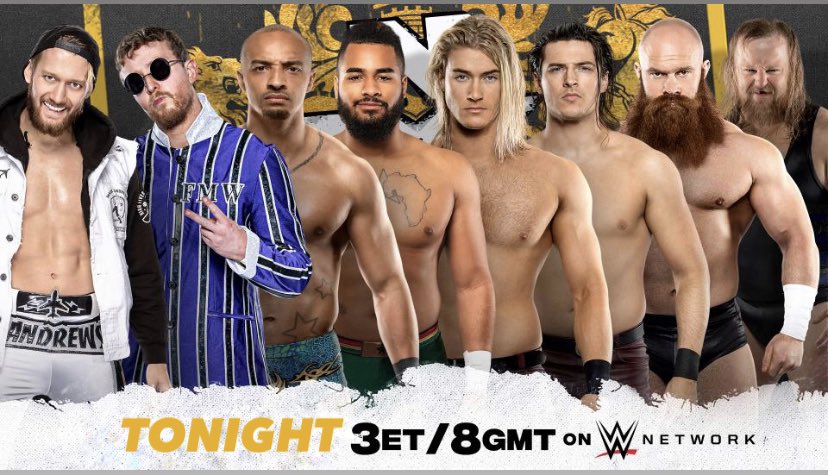 Welcome to Wrestling Inc’s live coverage of WWE NXT UK, which airs every Thursday at 3 PM EST on the WWE Network. Be sure to chime in on your thoughts about today’s show in the comments section below. Additionally, share our live coverage through social media. Make sure to click the REFRESH button to continue to get the most current up to date coverage. Above and below is what’s on today’s agenda:

An #NXTUK Tag Team Title opportunity is on the line today on NXT UK!

Welcome to NXT UK! The show kicks off with the Cruiserweight Champion Jordan Devlin making his way down to the ring.

The Irish Ace begins his monologue by explaining why he created this Open Challenge for the title. He wants to prove week by week that he’s the greatest Cruiserweight of this division. He’s still looking for challengers to prove him wrong. All of a sudden, he gets interrupted by Trent Seven. Trent says in just a few words that he’s going to trim down and challenge Devlin for the title. Devlin doesn’t brush his challenge off. In fact, he puts his hand out for a shake. Trent grabs his hand and clocks him on the side of his face. Devlin slides out of the ring, forgetting his title. Trent’s foot is on it. They lock eyes again before Devlin makes his way up to the ramp.

Next, we see both The Hunt and Pretty Deadly getting ready for their big 4-Way Elimination main event match.

Although @EddieDennis1986 is banned from ringside, has he helped execute a strategy for #TheHunt?#NXTUK pic.twitter.com/7eZyudIUlX

– Coming back from the brief break, we look back at Kay Lee Ray’s dominant reign as the NXT UK Women’s Champion. Kay wants the best of the best to challenge her for the title. It looks like Japanese sensation Meiko Satomura is stepping up to the plate. She is officially coming to NXT UK!

#NXTUK Women’s Champion @Kay_Lee_Ray said she wanted the best in the world.@satomurameiko is coming to answer the call. pic.twitter.com/XbpxUaATxT

Back to the ring, Ben Carter will compete in singles action!

Before the match starts, Sam Gradwell wants Ben Carter to know that he plans to send him back home. He doesn’t think Carter belongs in NXT UK.

The bell rings. Sam Gradwell pushes Ben Carter towards the corner. Carter comes out and lands a big chop on Gradwell’s chest. Gradwell gains wrist control. Carter escapes rather quickly with a dropkick. Carter’s agility is on point as he sends Gradwell over to the apron with another big dropkick. Gradwell is not happy with Carter’s antics and slows him down with a couple of boot shots to the head. He looks for a cover. Carter kicks out at two. Gradwell keeps swinging on the new signee. Carter finds a way to roll Gradwell up. Gradwell escapes at two.

Gradwell pounds Carter in the back of his head. He goes for two covers with the same results: kick-outs at two. Carter tries to create separation with a series of midsection punches and two big knife edge chops. Carter lands a swinging right hand, which sends Gradwell out of the ring. Carter takes to the skies twice with two massive flips over the top rope. Carter gets caught with a crossbody. Carter counters it with a guillotine choke. Gradwell throws him across the ring. Carter escapes with a moonsault off the second rope and lands a reverse DDT/elbow drop combination. Carter flies off the top rope with a textbook frog splash for the pinfall victory!

😲😲😲😲😲😲@bencarterbxb may very well be the best-kept secret in #NXTUK and all of @WWE! pic.twitter.com/2VPdgmtf8J

Up next, the second singles match on the card!

Sha Samuels holds his hand over Josh Morrell’s mouth and pushes him over towards the corner. Morrell finds a bit of offense with a general wristlock. Samuels reveres it. Samuels smashes Morrell with a series of punches on the side of his head. Morrell only gets one midsection shot in before Samuels throws him over his shoulder. He connects a stiff kick. Morrell crawls over to the bottom rope. This won’t save him as Samuels picks up him and sidewalk slams him onto the canvas. Morrell fires back with a big lariat to create some separation. Samuels gains the dominant momentum with a huge spinebuster before submitting Morrell for his first victory.

– Earlier this week, Ilja Dragunov spoke with a reporter about his match last week. He says he didn’t mean to snap on Jack Starz.

Before the main event, we get an announcement on what matches will take place next week. It’ll be:

Who will be NEXT to answer the Cruiserweight Championship OPEN CHALLENGE?

And now, the main event. This will be a 4-Way Tag Team Elimination Match to determine the No. 1 Contender to Gallus’ NXT UK Tag Team Championship!

Which team will earn an opportunity to challenge for #NXTUK Tag Team Titles?

It's a Fatal Four-Way ELIMINATION MATCH right now to find out! pic.twitter.com/lagyymWjw8

Howley tries to take Andrews and Flash Morgan off the apron. Smith focuses on taking Howley’s head off with a big lariat in the corner. Primate now comes in for Smith. The Hunt lay out Pretty Deadly with double suplexes. Chaos erupts as each team takes their fight both in and out of the ring. Primate looks for a lateral press on Smith. Smith kicks out at two.

Wild Boar takes over for his partner briefly with a shot to the back of Smith before bringing Primate back in. Another quick tag is made out to Wild Boar. Boar spears Oliver Carter off the apron. Howley slaps Boar’s back for a tag. Flash Morgan Webster makes his way in with a springboard moonsault for only a two count on Howley. Andrews and Webster go up and over on Pretty Deadly with stereo dives.

On the top rope, Smith takes Sam Stoker and Andrews and slams them on the canvas. Carter double stomps on Howley and moonsaults the rest of the teams on the outside. Smith sends Howley crashing on the mat with a Falcon Arrow. He hooks the leg. Stoker comes in to break it up. Howley gets caught by Andrews with a big clothesline. Smith and Carter eliminate The Hunt with a combination electric chair/cutter off the top rope.

The Hunt Is Eliminated

Smith looks for two rollups on Howley. Howley escapes every time. Andrews and Webster eliminate Ashton Smith and Oliver Carter with Free Toast At 3AM.

Now, it’s down to Pretty Deadly and Andrews/Webster. Andrews lands a hurricanrana until a rollup for only a two count! Stoker locks Andrews with the Figure Four. Webster breaks it up. Andrews continues with offense on the outside with a head scissors takedown on Howley. Webster takes to the skies with a senton off the top rope. Although he’s banned from being at ringside and his team has already been eliminated, Eddie Dennis helps Pretty Deadly out by shoving a steel chair to the back of Andrew’s injured knee. Pretty Deadly isolated Andrews with a spinebuster/neckbreaker combination for the victory.

The nefarious mastermind utilizes a chair despite being BANNED from ringside!!#NXTUK pic.twitter.com/A8TOkZ7a8b

An opportunity to challenge for the #NXTUK Tag Team Titles! pic.twitter.com/Y9rInp1JjH