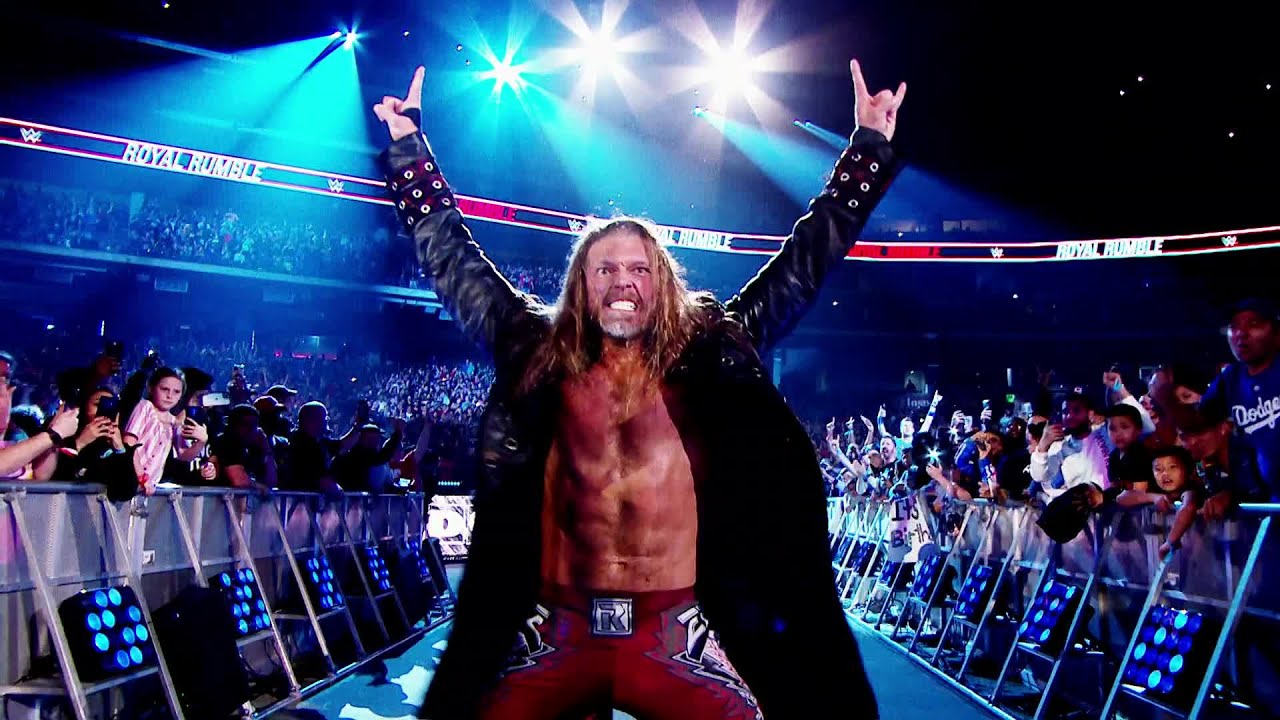 WWE’s 34th annual Royal Rumble takes place inside the ThunderDome at Tropicana Field this Sunday, January 31st at 7pm ET with the Kickoff Show beginning at 5pm ET on the WWE Network. This is the third year in a row that the Royal Rumble takes place at a baseball park. Last year’s event in Houston drew a reported 42,715 attendees while this year’s Rumble will only have virtual attendees.

WWE isn’t letting COVID hold the company back from the traditional spectacle at the Royal Rumble: Bad Bunny is scheduled to perform his latest single “Booker T” featuring the WWE Hall of Famer himself live at the event. Since moving to Tropicana Field, WWE elevated its spectacle and television presentation with a new camera for entrances, additional lights, lasers, and various pyrotechnics. After watching UFC 257, one has to wonder if and when WWE will use drones to add to their spectacle and presentation.

This will also be the first Royal Rumble since the death of the match’s creator: Pat Patterson. Patterson’s concept is a twist on the traditional battle royal match and has become the kickoff of WrestleMania season, allowing just about every single WWE Superstar some time to shine on a global stage. Known for its history of surprise debuts, returns, and twists, the Royal Rumble is the most fun WWE event of the year. Fans of classic Rumbles should keep an eye open for a tribute to Patterson somewhere in each Rumble match this Sunday.

This year’s event has six scheduled matches as of publishing time whereas last year’s event had six matches on the main card and two matches on the kickoff show. The winners of this year’s men’s and women’s Royal Rumble matches get to challenge for whichever WWE Championship they choose at WrestleMania 37. The men’s match has 21 out of 30 participants announced while the Women’s Rumble has 13 out of 30 participants announced. Below is a preview of each match on the card with predictions based on recent booking. In the comments, share what you want to see at Royal Rumble 2021.

After finally getting past Randy Orton, Drew McIntyre has conquered every challenger on the RAW roster. At the age of 54 and coming off a loss to Braun Strowman at WrestleMania 36, Goldberg doesn’t seem like an ideal opponent for McIntyre but RAW has booked itself into a corner when it comes to strong, heel, challengers for McIntyre. A win over Goldberg here will be another feather in the cap for McIntyre whose run as champion in 2020 was a highlight of the year.

Roman Reigns has defeated Kevin Owens in a TLC match and a steel cage match in this current feud and now the two will meet in a Last Man Standing Match. Kevin Owens has had the most consistently excellent matches with Roman Reigns throughout his WWE career and this one will be no exception. This match will likely have the vibe of The Rock & Mankind’s “I Quit” Match at the 1999 Royal Rumble. Owens will continue to push Roman Reigns physically and creatively in this match as the two solidify the legacy of their rivalry that has now spanned five years. As much as fans love Owens, Reigns is only growing more powerful and comfortable in his role as The Tribal Chief and Reigns will be the Universal Champion going into WrestleMania. Owens’ future is less certain, but his chemistry with Roman Reigns is undeniable.

Asuka and Charlotte (c) vs. Nia Jax and Shayna Baszler

Nia Jax & Shayna Baszler were blindsided when Charlotte replaced Lana as Asuka’s tag team partner at TLC putting a premature end to the powerful duo’s tag team championship reign. Nia and Shayna have teased a break-up recently over their mutual desire to win the Royal Rumble, but these two will pick up the win with the help of a distraction by Lacey Evans and Ric Flair. Asuka clearly has business with Alexa Bliss and Charlotte can only ignore Lacey for so much longer.

With Roman Reigns & Drew McIntyre entrenched as the champions of their respective brands, WWE has the opportunity to build a potential challenger for each champion’s title while mixing in feuds that have been unfolding since Survivor Series. The absence of Kofi Kingston in this year’s Rumble will be felt but Mustafa Ali is determined to make the most of his moment in the Royal Rumble. Big E seems like the most likely candidate to step into the “Diesel spot” in this year’s Rumble but it’s unlikely he’ll break Brock Lesnar’s record of 13 eliminations set in last year’s Rumble. Expect John Morrison to showcase his parkour skills in the match on top of his improved strikes that he displayed in his most recent handicap match against Sheamus. Nakamura’s recent face turn has also given him enough momentum that he has the most buzz as the next potential challenger for the Universal Championship. Braun Strowman returned at the end of SmackDown to also put himself into the mix for Reigns’ title. Sami Zayn will use his cleverness and perhaps some handcuffs to extend his time in the Rumble but will eventually be eliminated by a group of the many enemies he has made over the past 8 months. It would be great to see Otis get some measure of revenge on The Miz by eliminating him from the match as a bonus.

Surprise entrants in this year’s Rumble will likely be a returning Seth Rollins, Keith Lee was impactful in last year’s Rumble and deserves to come back in this year’s match, Adam Cole and Damian Priest have a lot to add to the match as well if they get brought in from NXT. Brock Lesnar is not expected to return at the Rumble since he is not under contract, but John Cena is signed to appear at WrestleMania 37 and could surprise everyone by returning in the Rumble. Buddy Murphy, Aleister Black, and Andrade all are healthy and available for the Rumble but creative hasn’t had anything for them as of late. Many fans would love to see the return of nostalgic favorites Carlito & Wade Barrett as well.

The top contenders of the entrants that we know are Edge, Jey Uso, AJ Styles, & Daniel Bryan. Edge’s return was the highlight of last year’s Rumble and his subsequent feud with Randy Orton was one of the best feuds of 2020 before having to take time off for injury. Jey Uso has been a revelation this past fall as he stepped into a singles role for the first time. AJ Styles is still one of the greatest wrestlers on the planet and his matches with Daniel Bryan and Ricochet recently have served as a reminder of that. WrestleMania is all about the biggest match possible around the biggest star in the company and the biggest star in the company right now is Roman Reigns. There is one man whose career has been intertwined with Reigns since Reigns won the Royal Rumble in 2014 to the dismay of the crowd: Daniel Bryan. Daniel Bryan has a ready-made story with Reigns that will carry WrestleMania from the WWE Network to Peacock in April. Bryan has been a major force on SmackDown for the past year in what he has termed his “last run as a full-time Superstar” and his star has risen outside the ring due to his popularity on “Total Bellas”. Daniel Bryan will win the Royal Rumble for the first time in his career and will finally get redemption for 2014’s debacle.

Sasha Banks is the queen of WWE’s women’s division and the main story of this match will be about building her challenger. The RAW Women’s Championship will stay in the orbit of Asuka & Charlotte until their breakup and its potential challenger will be left open should Becky Lynch or Ronda Rousey return. Charlotte, Nia, & Shayna will all be pulling double duty after competing in a tag team championship match earlier in the night. The Riott Squad has been struggling in their matches recently due to Billie Kaye. Look for Billie to continue her role as a bad luck charm for Ruby Riott & Liv Morgan. Peyton Royce could use a special moment in this match since she has been lost in the shuffle since the unnecessary split of the IIconics. Dana Brooke and Mandy Rose could also use a little something in this match as both have been spiralling since being moved from their angles from early 2020. Natalya and Tamina will get a spotlight match on WWE Backstage to determine who gets the #30 spot in the Women’s Rumble. There are so many open spots in the Women’s Rumble this year that there is potential to see a handful of Superstars from NXT. Rhea Ripley seems like a natural pick to appear since Charlotte used her win in last year’s Royal Rumble to challenge Ripley for her NXT Women’s Championship. Ripley could immediately insert herself into a feud with Flair but a Ripley/Bayley feud is enticing as well. Lacey Evans could continue her issue with Charlotte in the Rumble as well. NXT’s women’s division is stacked with exciting competitors that could make an immediate impact in this Royal Rumble should they appear: Io Shirai, Candice LeRae, Tegan Nox, Dakota Kai, Shotzi Blackheart, and more.

The favorites to win this match are Bianca Belair & Bayley with Alexa Bliss hanging around as an intriguing option. Bliss got Asuka to show fear for the first time in her entire WWE career this past month on RAW. Since associating with The Fiend, Bliss has taken on some of his mannerisms, moves, and supernatural powers. Bianca Belair got the biggest win of her career last night on SmackDown over Bayley in an excellent TV match. Belair cut a passionate promo after the win and has been the odds-on favorite to win the Royal Rumble according to Vegas betting sites, but Sasha Banks needs a heel to work against at the Rumble and Belair isn’t turning heel any time soon. Banks could turn heel, but she’s got her own Star Wars action figure coming out after debuting as a cast member of “The Madalorian” this past fall. It wouldn’t be the best business decision for Banks to portray a heel as she builds her reputation as a hero for young girls in Hollywood. Bayley and Sasha carried SmackDown as the Golden Role Models over the summer of 2020 and the two have emerged as locker room leaders in WWE. Sasha vs. Bayley at WrestleMania has box-office appeal and the two have once-in-a-generation chemistry together.

Carmella and her sommelier have been tormenting Sasha Banks since she defeated Bayley to win the SmackDown Women’s Championship last fall. The two had an excellent match at TLC but Carmella just doesn’t feel like a major threat to Sasha’s championship reign. Banks needs a true heel to help give her “Boss” character a major obstacle to overcome on the mic and in the ring. Banks needs someone who will challenge her character to her core and Carmella isn’t that opponent right now.

If you don’t love the yearly “By The Numbers” video, you’re no fun: