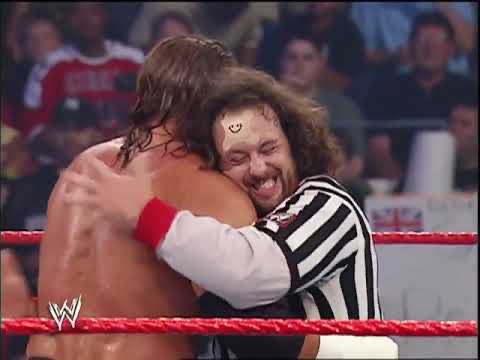 Former WWE Tag Team Champion Nick Dinsmore, aka “Eugene”, was on a recent episode of the Talk Is Jericho podcast. Chris Jericho asked Dinsmore about his relationship with Vince McMahon, and Dinsmore told a story about meeting McMahon after he tore his quads at the Royal Rumble in 2005.

” I probably didn’t put my face in front of him enough,” Dinsmore admitted. “I would have liked to maybe got a little bit better relationship, but I was there half nervous, showed up on time doing what I’m told. I had my knee injury, and I was in Birmingham doing therapy. And he was just getting out of surgery, so I just walked to his room, and he’s there.

“And he’s got his legs propped up, and he’s half not shaven. I can tell he’s nervous. I say, ‘I just want to say hi. Make sure you’re okay. And if you need anything, I’m in town, so I can I do it for you.’ I wish I would have sat a chair down and just talk his ear off. He had nowhere to go. I had all these questions in my head. ‘I was eight years old when I saw this. What’s the true story?'”

Jericho then noted that McMahon probably hated to be seen in that condition. He revealed that the hallway was cleared out when McMahon was being taken off on a stretcher that night.

“I’m sure he hated the fact that you saw him in that condition,” Jericho stated. “I remember when he tore his quads, they made us clear the hallways when they took him out on a stretcher. Vince didn’t want to have anybody see him that way.”

Dinsmore, as the Eugene character, was involved in many hot storylines with many top wrestlers. He recalled the time he got to pin Vince in a feud against Vince and Shane.

“It was the DX against Vince and Shane feud, and they paint over my head and then they put my head in the toilet,” Dinsmore recalled. “They just beat up Eugene and then I was in the ring, and I think it was Vince and Shane against Eugene.

“They were just going to beat him up, and they were going to beat him, but it was Shawn Michaels that goes, ‘Eugene should win. You guys were doing all that stuff to him.’ So then at the very end, I just rolled up Vince, one, two, three. Then he was like, ‘Oh my God!’ DX came out right before. They came out and diverted attention, and I got the schoolboy win.

“And Vince is the worst wrestler ever,” Jericho added. “He probably even screwed up the schoolboy.

“It was fantastic,” Dinsmore replied.

Dinsmore also recalled his angle with Triple H where Triple H and Evolution would use Eugene to try to get at then World Heavyweight Champion Chris Benoit. He recalled the beatdown he took from Evolution where he got busted open, and he revealed he got a concussion.

“We started on Highlight Reel when I became an official or extended member of Evolution, honorary member of Evolution,” Dinsmore said. “He signed an 8 x 10 and gave me the shirt, and Regal’s like, ‘Get away from him.’ And then they strung Eugene along for however long it was going on, making fun of him and then he’d come in. ‘Hey buddy. Why don’t you do this’ and getting Eugene to cause destruction or do something to screw up the babyfaces.

“They beat me up in Massachusetts. I got the color and then all of a sudden it’s all on my eyes and couldn’t see it. I had to take the RKO, and Batista’s thing the [power]bomb, and the Pedigree, and then I rolled, and I got a kick to the face, and that shoot busted me open and gave me a concussion.”

Dinsmore’s feud with Triple H would lead to a match at SummerSlam. However, Dinsmore pointed out that this was the Toronto SummerSlam where the crowd infamously took over and booed he faces and cheered the heels.

“The match was good, but it was in Toronto,” Dinsmore noted. “All of a sudden we go there and Eugene was hated. They all booed, and they loved Hunter. And it was the first time where I think I might have, I don’t know if I broke character, but I didn’t know what to do. I just put my face in the mat. Looking back now, I should have started whining at them but then that goes against kind of the dynamic leading into the match there.”