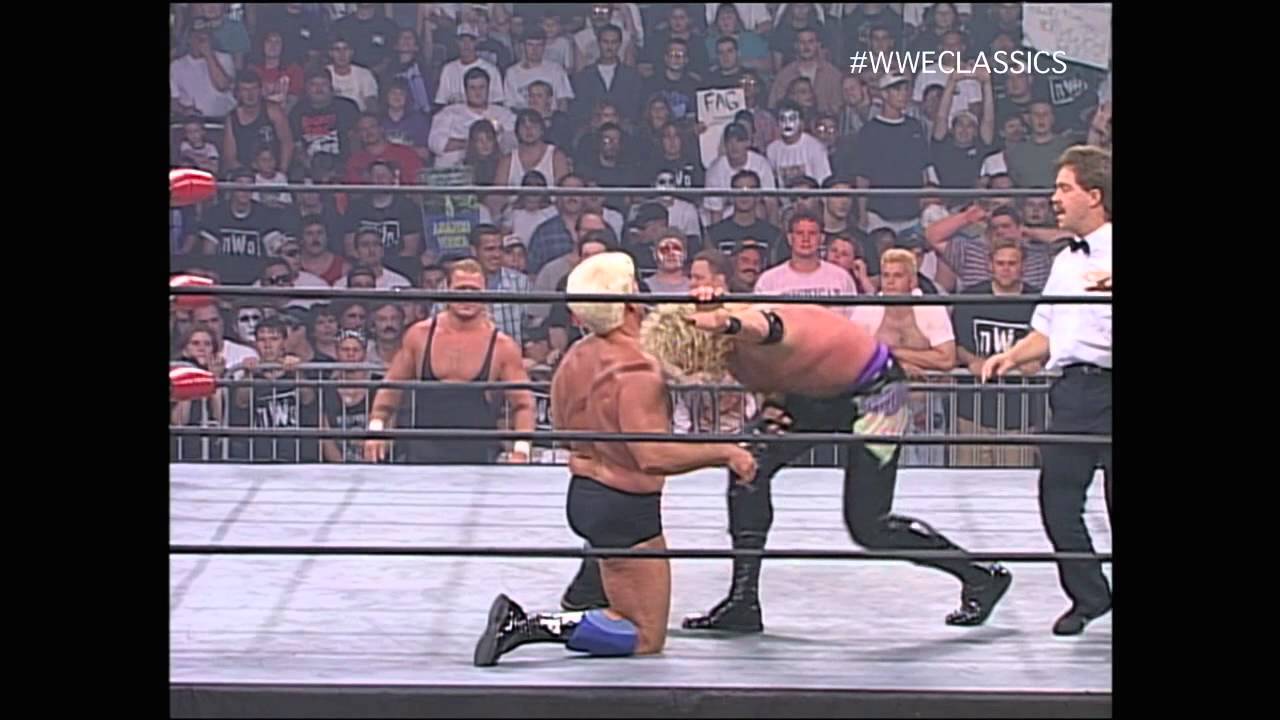 On a recent episode of Talk Is Jericho, WWE Hall of Famer Diamond Dallas Page came on and discussed the growth and success of DDYoga as shown in the new documentary “Relentless”. Near the end of the podcast, DDP showed off some pictures on his wall, and that led to him talking about fellow Hall of Famer Ric Flair and the time they squashed their heat with each other after Flair retired from WWE.

“Me and Naitch during my career and stuff and even afterwards, there was this tension, and I always loved the Nature Boy,” DDP noted. “About 10 or 12 years ago, whenever they dropped all the balloons for him when they retired him, I was watching it. I’m like, man, I never wanted to have this tension between me and him because I grew up loving that guy. So we’re both doing a signing in Jersey, and of course, he comes in the green room. He’s swarmed by people, and I wait until everybody’s gone.

“And when he’s done, he’s like, ‘Hey Diamond!’ I’m like, ‘Hey Naitch, can we talk for a second?’ He goes, ‘Sure.’ So we walk off to the side, and I say, ‘You know Naitch, I know over the years me and you have had a little bit of heat together.’ He’s like, ‘Oh Diamond, don’t worry about that.’ I’m like, ‘Naitch, I’m not worried about it. Bro, I want to fix it. I don’t know what happened. I know that I’ve said some s**t. I know you said some s**t. The last thing I want to do is be in this spot. Man, I love the Nature Boy. I would just love to start all over again,’ and I put my hand out, and I said, ‘I’m Diamond Dallas Page.’ And he grabbed me, and hugged me, kissed me on the forehead and God bless you. I really felt like this is the beginning.”

DDP then recalled he and Flair meeting up after Dusty Rhodes had passed away. He noted that he never thanked Flair like he did to Randy Savage, and he knew he wanted to plan it at his Hall of Fame ceremony.

“Me and Naitch started to really bond and then when Dusty past, we both were in Tampa, and we both stayed at a hotel that was way out of the way. And I didn’t know that, until I walked into the place and got something to eat with Brenda at the time, and he came over and talked,” DDP recalled. “And that night, we hooked up for dinner. We had a great time, and I know I never really thanked him the way I thanked Macho and all the guys before.

“I mean, I thanked him, and I was super respectful when he put me over for the world title, which was a huge deal for me. That night, I feel like Dusty put us together. I was going to get into it that night, and I literally thought to myself, nope, I’m gonna wait until the Hall of Fame and say it in front of everybody because a lot of people know if you read his book. We both were busting each other’s chops quite a bit, but that s**t had ended from that day moving forward.

“And when I got up there and got to give my acceptance speech, and I got to the Nature Boy. And I said, ‘Man, that day that I stepped in the ring with you and Hulk [Hogan] and Sting, you put me over with the Diamond Cutter in the middle.’ I said, ‘Man, I just can’t tell you how much I appreciate that and it’s not lost on me that that moment right there put me one step closer to this podium and I just want to thank you Naitch.’ And that took us to a different level.”

DDP continued recalling meeting up with Flair again and discussing his flight plans. He recalled Flair offering to fly him home on his jet and them having fun for the rest of that day, and he noted that everyone in wrestling is a family, something that he has come to learn over the years.

“We had a couple drinks. The storms were bad. We went back to the bar and a few more drinks. We got on a plane, and Naitch gets up and gets in the copilot seat. And I’m like, ‘Uh Ric? You ain’t driving this thing are you?’ He’s had a few, and bottom line is we landed. And Brenda had told him that it was my birthday and then he had to take me out to dinner, and I mean, it was the completion of a dream that I couldn’t even make up because Dusty and him had this, but they loved each other.

“They loved each other, and everyone in our business, I don’t care who tried to hold me down, whatever issue I have with anybody. I have no issue with anyone. We are a family. We are brothers together, and for me personally, I love every single one of those guys that I’ve been on the road with, that I’ve been in the ring with, that we’ve been able to share our lives with because especially bro, as you get up into your mid-60’s, you look at that life differently. There is no ego that checks in with me at any time. I know who I am. I know you are. I know who Ric is, but to me, we’re all family man, because no one knows what we did unless they were there with us.”

Previous
Jim Ross On Why The Rock Vs. Steve Austin Did Not Close WrestleMania 19
Next
Ariane Andrew On What Naomi’s Post-WWE Plans Could Be