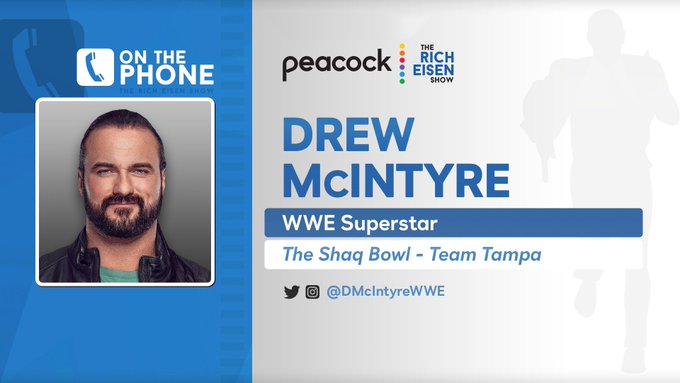 WWE Champion Drew McIntyre was recently on The Rich Eisen Show making him the first WWE Superstar to appear on the program since WWE’s deal with Peacock TV, which also distributes The Rich Eisen Show. On his appearance, McIntyre revealed details about his original gimmick in WWE before becoming “The Chosen One” in 2009 where he was originally slated to be a male model.

“Yeah, I remember. I was about 260 at the time,” McIntyre recalled. “‘We got this great idea for ya Drew. You’re gonna be The Runway Man. You’re gonna come out on a runway. You’re gonna model all the greatest underpants. That’s gonna be you’re gimmick this model character,’ and all my dreams crashed before my very eyes, but I couldn’t register it on my face because it’s WWE. It’s this huge opportunity.

“I just nodded. ‘That’s a great idea.’ Eventually, I had to cut down to 260 to be a male model. So I lost about 25 pounds to get the abs in, looking like an Abercrombie and Fitch model. I had a shaved face at the time, so I look like a pretty boy. I sat down with Vince McMahon. He asked me my opinion of the character.

“I said, ‘You know what sir, to get on television, I’ll make it work.’ He clearly saw I did not like it at all and said, ‘Just go out there and be yourself.’ And I already lost the 35 pounds. I have to gain this weight back somehow because I look like a male model, but I have to be a butt kicker. I’m glad that never saw the light of day though. Thank God!”

Eisen pointed out that McIntyre chose well with “The Chosen One” character. McIntyre agreed and admitted that he would have chosen anything where he could be himself, and he revealed he was watching YouTube videos to try to learn how to walk like a runway model.

“I would have chosen anything where I could just be myself,” McIntyre admitted. “The best characters are an extension of your real personality. Male model is nowhere close to Drew’s personality. I was watching YouTube videos trying to figure out how to walk like a runway model. I was like, ‘My goodness. This is not the one for me.'”

You can view McIntyre talking about his original gimmick below:

Previous
Edge Appearing On WWE SmackDown This Week?
Next
Konnor Reveals Legendary Tag Team He Wanted The Ascension To Form A WWE Stable With