WWE Hall of Famer Edge took to Instagram this afternoon and got fans to talking about a potential match against WWE NXT UK Champion WALTER.

As seen in the post below, The Rated R Superstar posted a photo of Drew McIntyre’s WWE Title, Roman Reigns’ WWE Universal Title, and Finn Balor’s NXT Title. He commented on the decision he still has to make on his WrestleMania 37 opponent.

One fan commented and said Edge’s recent WWE TV segments are “kinda boring” because everyone already knows who he’s challenging on The Grandest Stage of Them All. This was a reference to recent reports that say Edge is scheduled to challenge Reigns in one of the WrestleMania 37 main events.

“We all know who you are challenging…..so now these segments are kinda boring,” the fan wrote in the comments section.

Edge responded to the fan and mentioned a potential match against the Imperium leader.

“you’re right. I have made it obvious it’s gonna be WALTER haven’t I?,” he wrote.

This comment led to hundreds of fan comments on Edge vs. WALTER. The NXT UK Champion has not commented on the discussion as of this writing.

What do you think of a potential Edge vs. WALTER match? Would you like to see this happen at WrestleMania 37? Sound off in our comments section below.

You can see the related posts below: 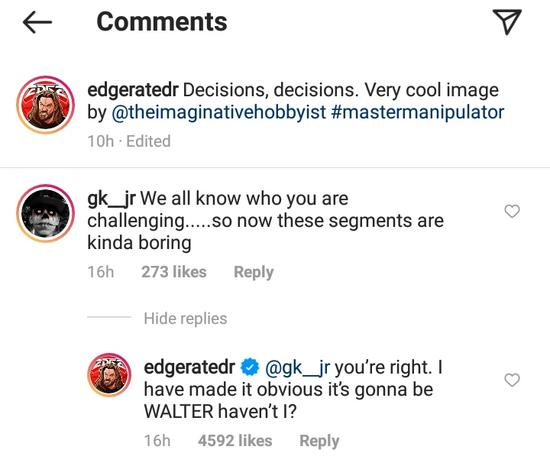