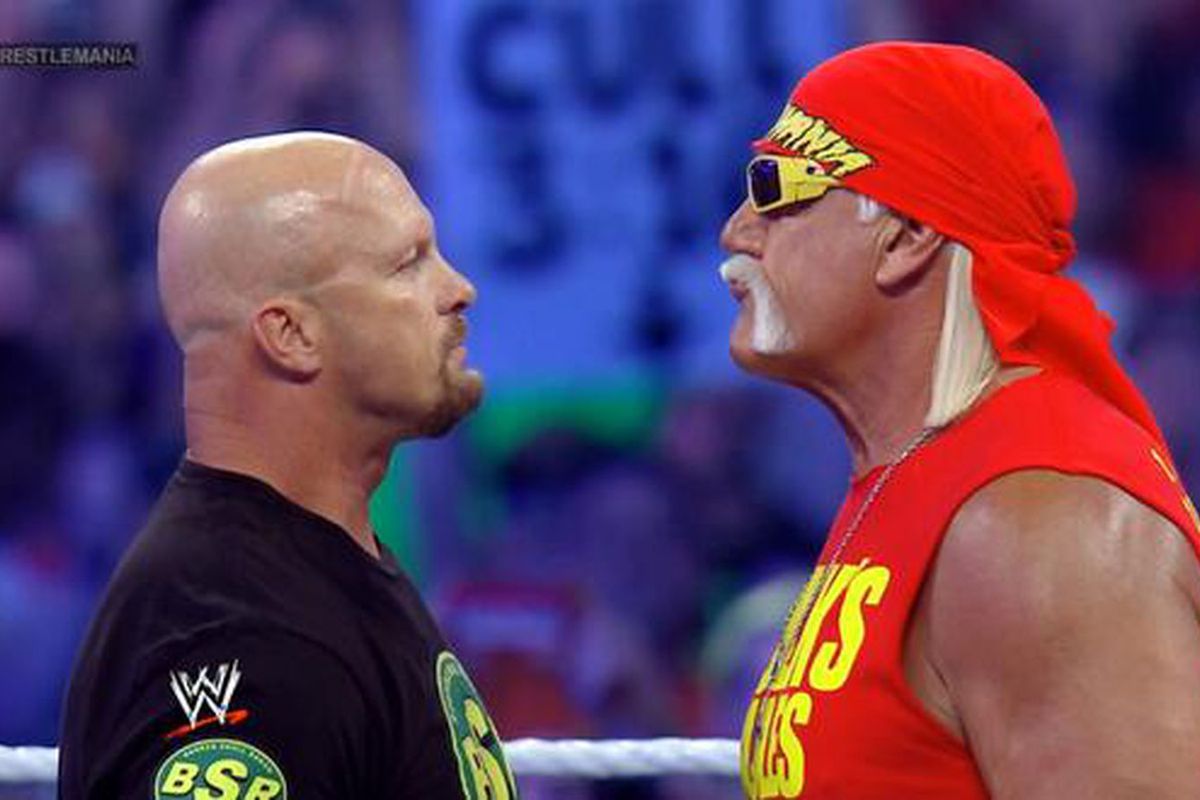 Hulk Hogan and Stone Cold Steve Austin are two of the names that come to mind in regards to the greatest WWE superstars of all time. Hogan dominated the ’80s as the top star of Vince McMahon’s company, while Steve Austin dominated the late ’90s and into the 2000s during the hottest time in wrestling history. Unfortunately, Stone Cold and Hulk Hogan never got to go face to face at a WrestleMania.

During the latest episode of the Grilling JR Podcast, Jim Ross talked about Hogan and Austin never squaring off in a singles match. Ross said the reason that match never happened was because of Austin felt that their styles would have clashed along with the hype for the match being sky high. He said Austin’s issues with having the match never had to do with anything personally against Hogan.

“It would’ve been interesting to see,” Ross said. “You have two of the most amazing attractions in the history of pro wrestling, so I’m sure it would have been a success financially. However, artistically? Maybe, not so much. Austin never had the confidence that he and Hogan would have enough chemistry to live up to the hype.”

“There’s always been the stories that Austin didn’t like Hogan, he didn’t want to work with Hogan, which is great for the internet gossip and chatter but I just think the styles clash was more than what Steve wanted to attempt. I don’t think it had anything to do personally with Hogan.”

“Steve’s issue was just that Steve had a very high pace. Intense, aggressive, somewhat snug, high pace,” Ross said. “That just may not have fit Hogan’s styles at the time because of his back [issues]. It would’ve been an interesting attraction. It would’ve been a great poster, a great promo, it would’ve made money. But I don’t think the match had a chance in hell of living up to the hype of the two stars.”

Ross also discussed why The Hart Foundation weren’t able to use their name in WCW after they left WWE after the Montreal Screwjob. He said you just can’t hand a talent the name that was built in WWE when they leave the company.

“What happens when [other] people start changing jobs and changing territories and they go ‘Well, you gave Bret his I.D’. Now there’s precedence that you will do that. Even though I’m one of the biggest Bret Hart fans ever, I can understand why Vince did that. I’m sure in those meetings he and I had, I endorsed that decision.”

Ross also mentioned how Vince had been a huge factor in getting Mean Gene Okerlund and Bobby The Brain Heenan jobs with WCW. He said Vince made it seem like they were both being stolen by WCW, but it was actually Vince’s goal to get them paid well and be a part of WCW since he did not want to pay what they were asking for.

“Vince helped facilitate Gene going to WCW,” Ross said. “Vince had made the decision that he wasn’t going to retain his services, but he didn’t want it to get out so by letting Genes contract expire, you have a deal where it’s as if he’s being stolen [by WCW]. That way it allowed Gene, according to what Vince was telling me, more money and negotiate a better deal from WCW.”

“Same mindset with [Bobby] Heenan. [Vince] ‘Let WCW steal Heenan.’ Both of those guys got better deals. It really was a win-win. I thought that was an honorable thing Vince did.”