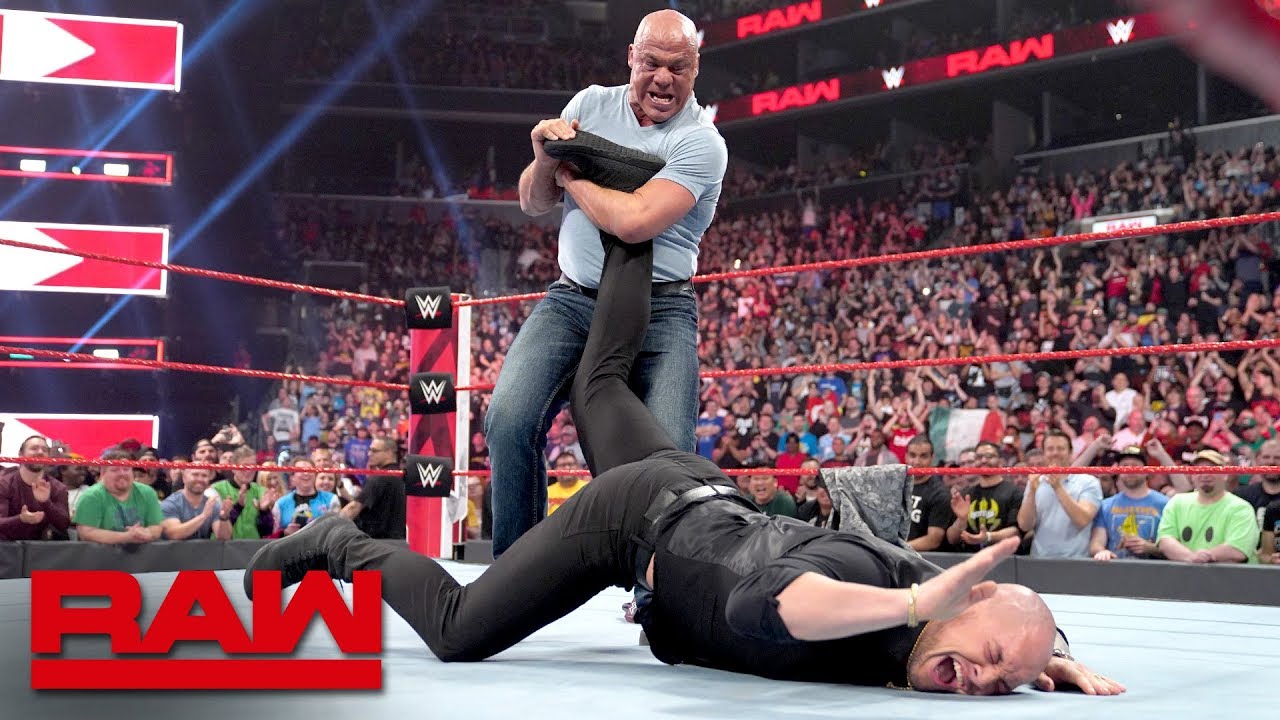 On the latest episode of The Kurt Angle Show Podcast, Kurt Angle talked about his return to WWE in 2017. When Angle first came back to the company as a Hall of Fame inductee, he was announced as the General Manager of Raw the following night. Given the fact that American Alpha (Jason Jordan and Chad Gable) were starting to make a name for themselves around the same time Angle returned to the company, Angle thought it was a natural fit for him to be paired with the 2 Olympic style wrestlers. Angle also mentioned that Jason Jordan, who was his illegitimate son in storyline, was supposed to be his opponent at WrestleMania 35.

“I was excited because I wanted to pair up with Jason and Chad when they were tag team partners,” Angle said. “I wanted to wrestle and I wanted to be the world champion and have them be the tag team champions just like Team Angle. I thought it made a lot of sense and they decided that I was going to have an illegitimate son and they weren’t sure who it was going to be. They decided to pick Jason over Chad, I’m not sure why, it might have been a politically correct move.

“I was happy, I was excited about it because Jason was improving. He was on his way to main event status until he hurt his neck, that’s when the program ended. I was stuck high and dry without a partner for the next WrestleMania [35] because that’s who I was going to wrestle was Jason.”

Angle discussed WWE transitioning him from Jason Jordan to Baron Corbin due to Jordan’s injury. He said he didn’t think Corbin was at the level to wrestle him at a big stage like WrestleMania, but was glad to hear after the match Corbin was given a minor push by the company.

“Baron was more of a bully, I was more of the victim, I didn’t like that,” Angle said. “The program was fine. I was okay with it, it was a lot of fun to do. Baron’s a great talent, I didn’t expect him to be my opponent at WrestleMania because at that time I don’t think he was at the level that he deserved to go into WrestleMania wrestling a Hall of Fame legend. Even though afterward they utilized him pretty good, I think my WrestleMania match ignited that.”

Angle noted that the whole reason for his final match against Corbin was to put him over and make him a star. The former Gold Medalist said he had a conversation with Vince once he decided he was going to retire to try and change his mind on facing Corbin.

“Vince wanted me to get him over and that was the plan the whole time, I knew that,” Angle said. “At the time when they told me, I was thinking this was going to be my last match and I’m going to retire, I need to tell Vince. If I want an opponent other than Baron, I need to tell him right now.

“I went to his office and I said ‘I’m going to retire at WrestleMania Vince. I know you have a program planned with Baron but I would like to have John Cena because I started his career and I want him to end mine.’ He said ‘Well, you’re not doing that this year, you can possibly do it next year if you continue to wrestle for a year.’ I said ‘No, I want to retire this year because my body is breaking down and I feel like I don’t want to go on after that. I’m not able to perform at the level I expect to. I’m not crazy about wrestling Baron only because of his status at the time.’ I just don’t think at that time he was at the level that needed to be to wrestle a main eventer or Hall of Famer.”

Angle talked about being positioned on the card between Triple H and Batista’s match and the Women’s main event. He said having that position on the card told him that his retirement match was just a filler match that wasn’t treated with much importance.

“When you have 16 matches, that’s a long show,” Angle said. “I think that show was 7 hours long. There were a lot of matches on there, and being 14 it’s a lot of pressure but I also understood, when you’re in the business as many years as I am, you realize what each match is for and what it represents.

“The #14 match, it was structured in between two feature matches, my match with Baron Corbin was only 6 minutes long. It was a filler match, that’s what it was, it is what it is. I understand why they did it, my body was breaking down and I couldn’t go at the level I used to. Vince McMahon gave me the retirement match not that I exactly wanted but needed. I was just happy to have the match. It was a filler match, it was what it was.”

The match between Corbin and Angle ended up only lasting 6 minutes and saw Corbin defeat and retire the Hall of Famer for good. Angle said he wasn’t able to perform at the level he would have liked to and that day was tough for him. He said he wishes he could’ve come back to WWE and been treated like how Goldberg has been.

“I didn’t do a lot in that match,” Angle said. “My body was shutting down, I gained weight, I looked different, performed differently. I was so excited to be at WrestleMania but I couldn’t wait for it to be over because I knew it wasn’t a Kurt Angle performance the fans expect to see and it’s disappointing. I wanted to perform at that level, I came back to the WWE with the mindset that I was going to kick ass, take names, win world titles.

“A good example is Goldberg. He comes back, wins world titles and is in the main event of WrestleMania. I was hoping that the same would be for me but it just didn’t happen. Unfortunately because my body was shutting down because of the inactivity of not wrestling it was really difficult for me to perform at that level any more.”

Retirements are rarely a permanent thing in pro wrestling. Angle has yet to wrestled since his retirement and he said he’ll stand by that. He also mentioned how on the day of his retirement he was so filled with emotions that he just let himself soak in the moment because he knew he’d never wrestle again.

“It was a mixed feelings day for me,” Angle said. “I was excited to get my match out of the way, I also wanted to soak in the moment. When I walked out, that’s when I soaked it in. That’s when I forgot everything I was doing and said enjoy it, you’ve got 82,000 fans screaming at you telling you ‘You Suck’ which is ironic but I understand why. I soaked it in, performed the best I could. I wrestled at my abilities at the time and did the best I could.

“It was a really cool moment but it was also sad because I knew I was never going to wrestle again. Hall of Famers usually tell you they’re retired but they’re not. I stuck to my promise, remember that. I didn’t return and I haven’t returned at all and don’t expect to.”

Previous
Rob Van Dam On Who Should Induct Him Into WWE Hall Of Fame, Reveals New WWE Documentary
Next
JBL And Ron Simmons Talk WWE Splitting Up The APA In 2004