Kurt Angle Talks Lars Sullivan Not Working Out In WWE 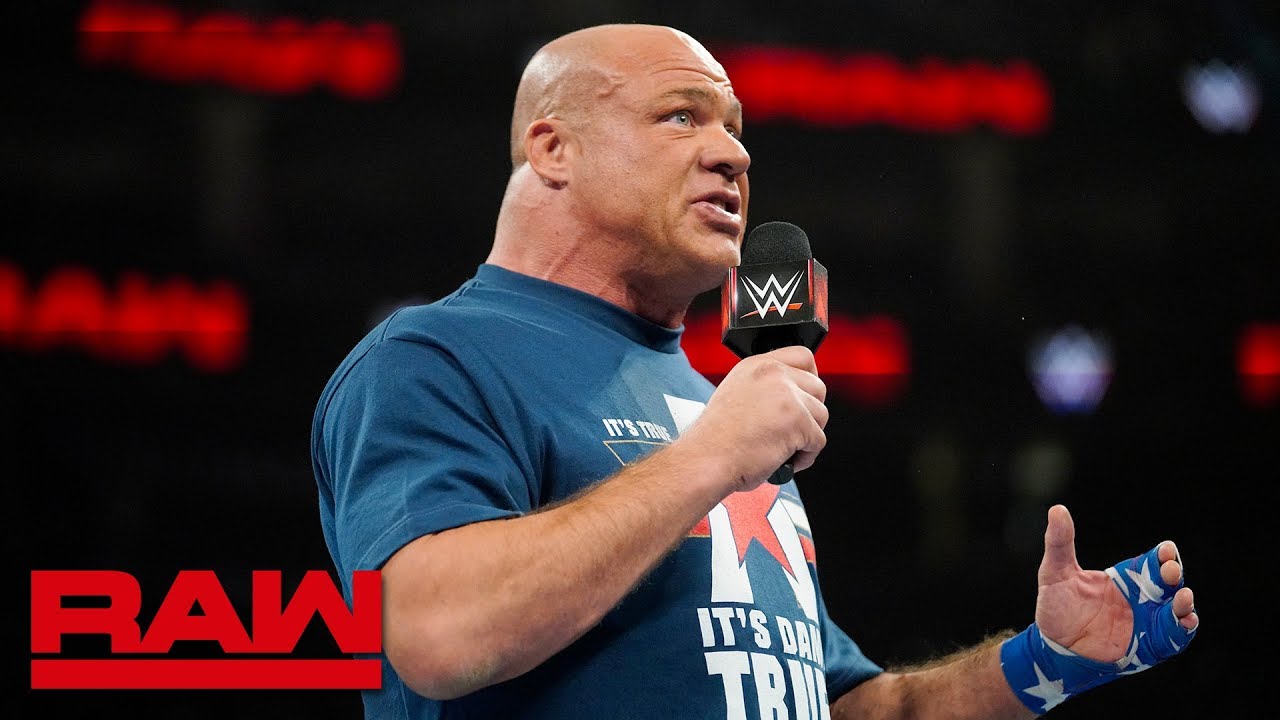 During the latest episode of The Kurt Angle Show Podcast, Angle talked about his retirement from the business at WrestleMania 35 against Baron Corbin. The decision to have Angle retire against Corbin was met by a lot of criticism, including from Angle himself. Angle noted during the podcast that he had asked Vince McMahon if he could face John Cena in his retirement match but was turned down.

“I never reached out to John,” Angle explained. “I decided to go to Vince and talk to him about it, when I had the meeting with him I’m not even sure he even contacted John. I wasn’t expecting John to be at WrestleMania so I went to Vince a good month and a half before WrestleMania to tell him ‘I want John Cena at WrestleMania, I want it to be my retirement match. I’d love to wrestle John because I started out his career and I wanted him to end mine.’ I was hoping that he would put me in that match but it just didn’t happen.”

On the same night Angle retired, Cena confronted Elias in his old school Doctor of Thuganomics gimmick that put his WWE career into high gear. Angle talked about seeing Cena that night. He said that a possible reason that the match didn’t happen was because Cena didn’t want to wrestle on the show.

“That’s what made me go crazy was he’s the Thuganomics Cena and I’m the Olympic hero, this would’ve been perfect,” Angle said. “I didn’t think he was going to do a throwback and ironically he did. I saw him at WrestleMania, I gave him a big hug and told him I wanted him to be his match. He said I know, it just couldn’t happen. I didn’t ask him why, maybe Cena didn’t want to wrestle at WrestleMania. Maybe that’s the reason it didn’t occur, I don’t know.”

Angle continued to talk about working with Corbin at WrestleMania 35. The match only lasted 6 minutes, but Angle said Corbin allowed him to do whatever he want in the ring.

“He was great, very professional, very kind, respectful,” Angle said. “He was cool with doing whatever I wanted to do. He didn’t care if I kicked his ass the whole match and he snuck a victory, he was just happy to be in the ring with me. I thought that was really cool. I like the kid a lot, I was glad to do the honours for him. He’s very likeable, he’s a good kid. Very smart and knows the business.

Angle talked about his reaction to the moment when his final match in WWE was over. He said it was a tough night for him and tough to deal with because that wasn’t the retirement match he wanted.

“I was relieved it was over,” Angle said. “I was a bit sad, felt a little guilty about being relieved. I never felt that way about a match before, I always did my best and I was very hard on myself all the time. This time I was very easy on myself. As long as you get through it alive you’ll be fine. My mindset before that was I don’t care if I died, as long as I have a great match. I felt guilty about that, I got a little emotional with the crowd.

“It was the last time I was going to hear the ‘You Suck’ chants. It was a difficult situation for me. I was very emotional that night, my wife knew that something was bothering me and it was accepting that I was retired and not putting on the performance I wanted for my retirement. That was really hard.”

Angle discussed the reaction backstage after he went back through the curtain. He said he walked to the back and got a standing ovation from the locker room. Angle also mentioned his relationship with Vince McMahon, who let him go in 2006. He said that he always had a father/son type of relationship with McMahon and he appreciated hearing the kind things that McMahon had to say about him.

“It was cool,” Angle said. “Vince brought all the talent into Gorilla, a lot of them and some of the producers and they all gave me a standing ovation which was really cool. I didn’t deserve a standing ovation but I guess my career deserved it, not that match that night.

“Vince came up and hugged me, I’ve always been close with Vince. We’ve always had a father-son relationship. He treated me like [he was my] father too, he scolded me when I needed to be scolded, and he rewarded me when I needed to be rewarded. He also has the ability to have you learn lessons, he can be very hard on you and it’s usually because you deserve it. Him saying that he was proud of me and congratulations on your retirement, it meant a lot to me.”

On the night after WrestleMania 35, Angle appeared on RAW and beat down Corbin, but was the destroyed by a debuting Lars Sullivan. Angle talked about being attacked by Sullivan, noting that the worst part about what happened is the direction Lars has taken since that segment.

“I thanked Baron because he was going to allow me to shine before I stepped down,” Angle said. “After the WrestleMania match, being able to go out in the ring and get some shine on him, I ended my career on a high note and then all of a sudden Lars Sullivan came out. I wouldn’t have been upset if Lars Sullivan worked out.

“Vince loved his look, strength and explosiveness, I just think he wasn’t as experienced as he could have been to start out. I think he needed a little bit more training, he was very basic and he had an incredible look and I think Vince was drawn to that. I had to put Lars over, just another one of those things I did before I made my way out of the company as a wrestler.”

Angle recalled reading the writing on the wall during his return to WWE. He said seeing himself take pinfall loss after loss made him realize his time with the company was coming to an end and it was time to retire.

“It’s humbling,” Angle said. “You just don’t know where your place is in the company when they do stuff like that. You know that they’re almost kind of forcing you out, what else could I do? I was losing quite a bit, I was getting very few matches and they didn’t have any plans for me.

“I had no choice but to retire. I don’t blame them, I blame myself because I put myself in a position to make so many mistakes in my past that it caught up to me. Because of those mistakes, I didn’t have the opportunity I wanted too when I returned to the WWE. That is my fault, that’s all on me.”