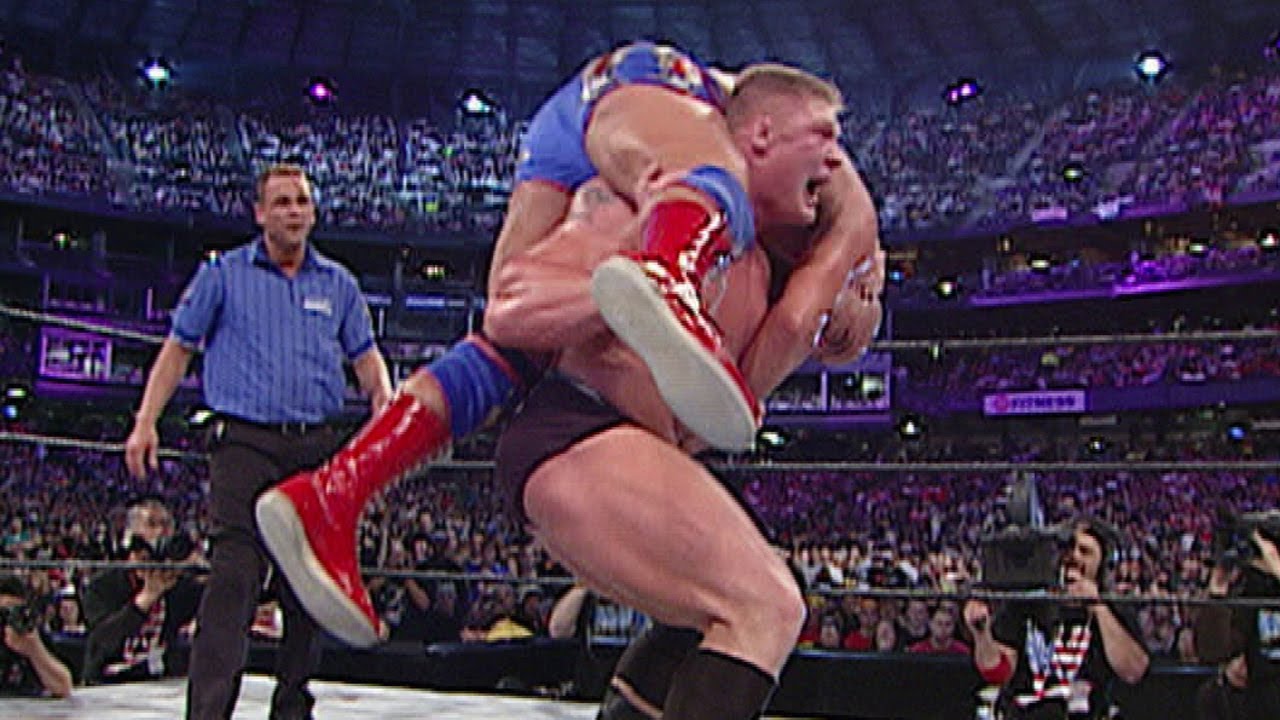 At WrestleMania 19, The Rock and Stone Cold Steve Austin finished their trilogy, Shawn Michaels and Chris Jericho squared off in a classic and Triple H and The Undertaker had their second match at the show of shows. However, the match that went on last was Kurt Angle and Brock Lesnar for the Undisputed WWE Championship. Although it was the main event, Kurt Angle went into that match and wrestled with a serious neck injury that was going to require surgery, so he had to drop the title to Lesnar.

On the first episode of The Kurt Angle Show, Angle talked about going into the match with Lesnar with a bad neck. He mentioned how surgery before the match wouldn’t be an option because of much a WrestleMania main event meant to him. Angle said telling him and Lesnar to take it easy wouldn’t be possible.

“I told Vince we were going to take it easy but when you go out there, the fire, the excitement, adrenaline pumping, you want to do your very best and put on the best performance you can,” Angle said. “That’s what we do. We take pride in that, it helps our egos.”

“To go in a match and take it easy, sure you can do that in an untelevised event, but this was WrestleMania and there was no way I was going to do it half-assed. I didn’t have a lot of character in that match because I was focused on my neck and the match, making sure I protected myself and didn’t injure my neck any worse than it already was.”

The most memorable moment of the match came at the end when Brock Lesnar climbed the top rope and was going to hit a Shooting Star Press on a prone Angle. Lesnar botched the move and landed right on his head.

Angle talked about that infamous moment and described what it was like to be laying down watching Lesnar land flat on his head. He said at that moment he thought Lesnar was dead because he wasn’t responding to him.

“He wasn’t responding, I said ‘Brock, are you okay?’ He wasn’t saying anything, I went over and covered him and told him ‘You gotta kick [out], you gotta kick,’ because I did not want to hold that title for another day.”

Angle talked about the aftermath from the shooting star press and how it impacted Lesnar. He said they had an ambulance waiting for him in the back and Lesnar was refusing to go in it.

“We got in the back and he had an ambulance waiting for him to take him to the hospital and he wouldn’t go. He was not going to go, he was being stubborn, he was pretty pissed off. I had to talk him into getting in the ambulance and eventually he did.”

To make matters worse, Angle revealed he was actually the one who suggested to Lesnar to do the shooting star press in the match. He said he had seen Lesnar do them in OVW and wanted to add a major spot to their match since they were in the main event of WrestleMania.

“He should’ve been dead. Something like that, hitting that hard just straight on your head, what a scary moment. You just didn’t know if Brock was going to get up or be able to walk again. It was really scary, those are the chances you take when you do stuff like that. I feel badly because it was my idea and Brock had no plans of doing it and I talked him into it. I feel bad about it.”