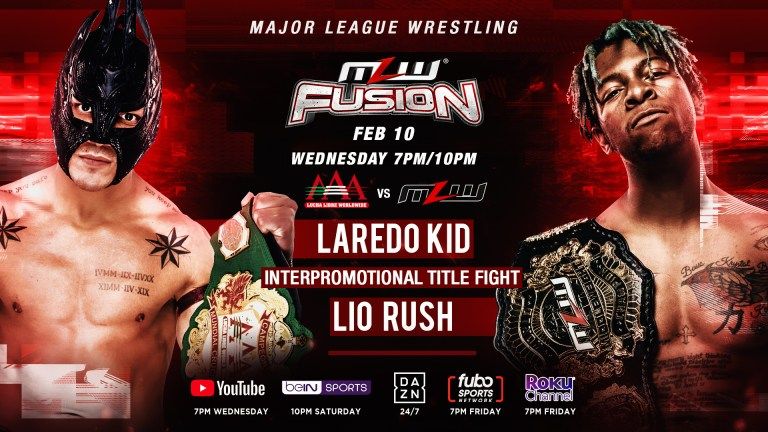 Tonight on MLLW Fusion, history will be made as MLW and AAA will join forces in an interpromotional Title vs. Title main event between AAA Cruiserweight Champion Laredo Kid challenging the World Middleweight Champion Lio Rush.

Two weeks ago, Laredo Kid successfully retained his championship against Zenshi. After the match, he promised MLW and AAA fans that he would become a future double champion of both companies. This message landed directing in Rush’s direction, who officially accepted Kid’s challenge for this week.

Looking at the tale of the tape, Kid is just shy of being the AAA Cruiserweight Champion for nearly two years. He won the title on February 16, 2019, at AAA Conquista Total in Morelia, Michoacán, Mexico. The aspiring luchador is ready to make his mark in MLW.

His challenger, on the other hand, is a freshly new champion. Rush saw his first big victory in MLW after beating Myron Reed for the Middleweight Championship at Kings of Colosseum. The “Moneyweight” looks to add another belt to his already established resume.

The big question on everyone’s mind is: Will these two titles come together and unify tonight?

* Calvin Tankman will return to action

* Tom Lawlor will reveal more information on what fans can expect for his Filthy Island episode next week.

Be sure to join our live coverage of MLW Fusion tonight at 7 PM EST!