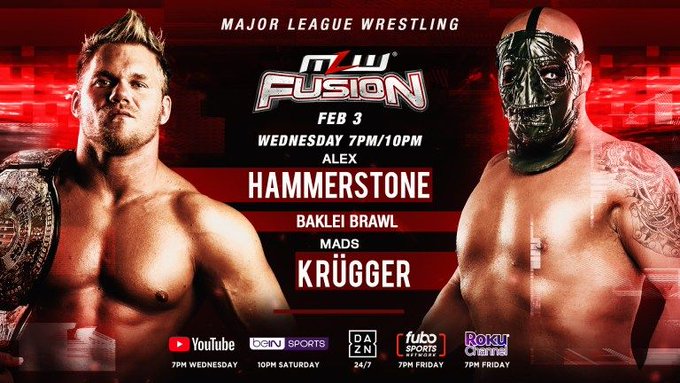 Tonight on MLW Fusion, the MLW World Tag Team Championships will be on the line, as Los Parks (LA Park & Hijo de La Park) will defend their titles for the first time against TJP & Bu Ku Dao. And in the main event, Alex Hammerstone and Mads Krügger will rehash their bitter rivalry in a Baklei Brawl match.

Last week on Fusion, Bu Ku Dao & TJP successfully defeated Violence Is Forever (Dominic Garrini & Kevin Ku) for their No. 1 Contenders spot for the tag team championship. Dao and TJP are in for a tough battle, especially if Los Parks continues pulling tricks, the same ones that helped them win the titles in January.

As mentioned before, Hammerstone will once again stand toe-to-toe against Krügger in a Baklei Brawl match. These types of matches are known for their bare-knuckle, no-holds-barred stipulations.

Hammerstone felt the wrath of “The Black Hand of Contra” when he was put on the injured shelf for several weeks after The Restart. Fast forward to last month when Hammerstone returned and put his National Openweight Championship on the line against Krügger, neither man could contain themselves, causing the match to end in a No Contest. Tonight, anything goes in their grudge match. Nothing will be off-limits.

💰What organization does @AZTECALucha have their eyes on?

Be sure to follow our live coverage of MLW Fusion at 7 PM EST!