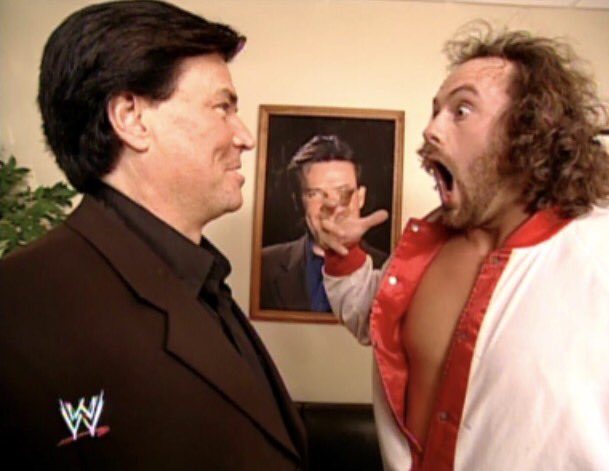 Former WWE Tag Team Champion Nick Dinsmore aka Eugene was on a recent episode of the Talk Is Jericho podcast. Chris Jericho asked Dinsmore about how he got started in pro wrestling and with OVW.

“When I went to high school, I wanted to be a pro wrestler, but after everything at school, they were just announcing so-and-so Nick Dinsmore, he wants to be a pro wrestling star,” Dinsmore recalled. “A girl who was a year younger than me comes up to me says, ‘My dad’s got a wrestling school here,’ and that was ‘Nightmare’ Danny Davis’ daughter.

“When I was 18, I went and watched. I was so excited and then I got injured playing football. So I had to rehab that, but I started when I was just 19 just working in Louisville training with Danny for about three years. I started in ’96. I think in ’98 is when the first guy Rico came to OVW, and at that time, none of us made any money, but they were starting to bring in the stars and whatnot. And then in the end of 1999, I got offered a developmental deal.”

When Dinsmore was in OVW, he was also there with future stars like Randy Orton, Brock Lesnar and John Cena. He talked about who out of that group showed promise early on and who needed more seasoning.

“Randy was good off the bat, and I think he had just a little bit of training, but of course, he’d been around it his whole life. He was showing me stuff,” Dinsmore noted. “Brock was good, but he was big. He happened to just transition to more of a pro wrestling style. Shelton [Benjamin] was spot-on from the minute he came there. He was one of the first ones too.

Dinsmore continued revealing that Cena had told him that he didn’t think he would make it because everyone else was much bigger than him. Dinsmore said that once Cena relaxed, he then got better.

“Cena told me before on the first day he walked in OVW and he saw all the guys that were much bigger, he was muscular but they were just a little bit bigger, he didn’t think he was going to make it,” Dinsmore revealed. “He said, ‘I’m gonna wash out of here,’ and then for a while he was he was rigid in the ring.

“And finally, we got him to relax and start having fun. Then he’d go out there and play, but then I think when he went to the main roster, he felt he had to be a certain something, and then finally when you relax and just had fun, then it was to the races.”

Jim Cornette had a large influence in OVW, and Dinsmore talked about working under Cornette when they were filming weekly TV. He noted that he was booked as the top guy in OVW so his relationship with Cornette was a good one, and he recalled Cornette’s way of writing him off when he had to take time off for school.

“Oh, I enjoyed it, but he was writing for me,” Dinsmore noted. “I was top guy all the time, hometown boy, and he got me over in Louisville because people still think I’m a great shooter and state champion. It was lifted and parts of it were true, but Cornette made me sound great and just got me over. I was still in college, and my last college credit, the only class offered was on Wednesday night was when TV was.

“So I go, ‘Jimmy, I can’t make TV for a whole semester.’ Goddamn, but then he came up to me the next day like, ‘Okay, it’s perfect. This is what we’re gonna do,’ and it was right there. I lost a match to Brian Christopher and the stipulation was if I lost, I was managed by Kenny Bolin. So Kenny Bolin wasn’t going to put me on TV because he didn’t like me. I was the babyface. So I would do video tapes, backstage things or whatever and other times record, but I wasn’t on TV for however long the semester was.”

Jericho asked if Dinsmore ever witnessed Cornette freak out at someone. Dinsmore told a story about Cornette yelling at Cena and Orton for going over time in a main event.

“Oh God yes. They would always put Rob [Conway] or myself or Doug or Danny Basham in the main event because Danny taped TV like it was live, and he didn’t want to edit and didn’t want to stop,” Dinsmore explained. “So one time Cornette tried Cena against Randy in the main event and counting down 30 seconds, 20 seconds, 5, 4. They went over two minutes and 17 seconds something like that.

“And I remember Cena coming back. It was a good match. He’s like, ‘Yeah, we did real good.’ Cornette’s like, ‘Goddamn 2 minutes 17 seconds!’ Gets his baseball bat and starts beating the windows in the building down from us but it’s an old building. Hitting his car. Randy was gone. He just left when he came back. Every now and then it came out.”