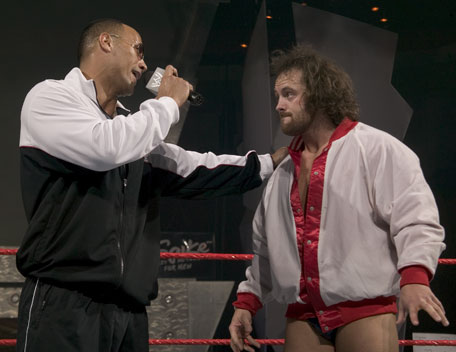 Former WWE Superstar Nick Dinsmore was on a recent episode of Talk Is Jericho where he discussed the Eugene character. During the podcast, he revealed the origins of the character.

“Rip Rogers came to me. ‘Nick, I got an idea,’ and he spelled out the whole thing,” Dinsmore said. “Rip’s son has autism. So he’s telling me he could count in Korean and do all this stuff on the computer but couldn’t be very social when he was in school. So what about a character that can do every move spot on but when he goes to talk to somebody.”

“I put in the back of my mind. A couple months went by, and they sent down the agents, Arn [Anderson], or Fit [Finlay] or Dean [Malenko],” Dinsmore recalled. “I don’t remember who it was, and I pitched that character to them. ‘Na, WWE ain’t going to do that Mighty Igor stuff.’ Next month the writers came down.

“I pitched it to them. ‘No, no, no. WWE’d never do that.’ I guess I did get frustrated at one point because then I told Doug Basham, ‘I think I’m going to quit and try to go to Japan,’ but I wasn’t going to do that. I was getting paid to live at home and be a star in my own territory, but I think Doug told maybe Dean. Dean told Johnny Ace (John Laurinaitis).

“All of sudden, next thing I’m sitting in a meeting with Vince. ‘I want to get back to character-based wrestling,’ and I just spit out this character. And Stephanie was in the room. She’s like, ‘Oh yeah, they could do this and this.’ All of sudden Austin walks in. It was in February. I think Saturday Night Main Event where he came back. Austin walks in, and Vince goes, ‘Have you ever seen him wrestle?’ I said, ‘Well, Danny Davis trained me,’ and I knew that Danny and Austin had a connection from Dallas. So he just looked at me, looked at Vince. ‘He’s probably one of the best then.'”

Chris Jericho then asked where the name Eugene came from. Dinsmore explained it came from the son of late WWE referee Bucky Palermo.

“Well, I met him with WWE, and he’s a longtime fan, longtime nearly family member of the WWE Universe,” Dinsmore said. “He’d come to the shows. His father’s name is Bucky. I think Eugene had Down Syndrome. They gave it to me, and I heard Vince contacted Bucky and said, ‘Would you have a problem with that?’ I don’t know if that’s true or not.”

After that, Dinsmore said he worked a live event to start off. He said he got a standing ovation from Triple H and Stephanie when he came to the back because he committed to the character.

“Walked back through the curtain, Hunter, Stephanie and Fit all [gave a] standing ovation,” Dinsmore said. “He said, ‘You committed to the character 100%. The guys that go out there are unsure and you can see it in their face.’ I just went in there and did it.”

“There was only one kids character, and it was Hurricane. And he was on SmackDown,” Dinsmore stated. “So I knew that one brand didn’t have a kids character, and that was kind of post Austin, post NWO. Everybody wanted to be a cool, strong heel, and I said I want to do the complete opposite. I want to be a sympathetic, comedy babyface, and it was just a slot that wasn’t filled at the time.”

Dinsmore’s first big feud was against Jonathan Coachman. The most memorable moment in the feud was when Dwayne “The Rock” Johnson made his return and put over the Eugene character. Dinsmore recalled The Rock going over in their segment and The Rock’s reaction to it.

“Coach, we had a big match,” Dinsmore said. “That’s when The Rock came back when coach yelled at me and told me to leave. ‘Eugene get out of here. Nobody wants to see you.’ I go all the way back down almost past the curtain, and I’m literally crying. Rock’s music hits. He hadn’t been on TV in two years.

“We were in San Diego. Nobody knew he was there and the people popped, but I think they almost felt like it’s going to be a joke. Then he came to the curtain, and it’s a big huge one. And he’d get to the ring, and I think it was slated for 11 minutes or something. We were on 17 minutes. We got to the back, and Coach is like, ‘What are we gonna do?’ He goes, ‘Don’t worry, it’s good.'”

Previous
WWE Hall Of Famer Provides Health Update After Stroke, Thanks WWE For Looking Out For Him
Next
Jon Moxley Wants WWE Legend In AEW, Says AEW Can Offer More “Creative Freedom”