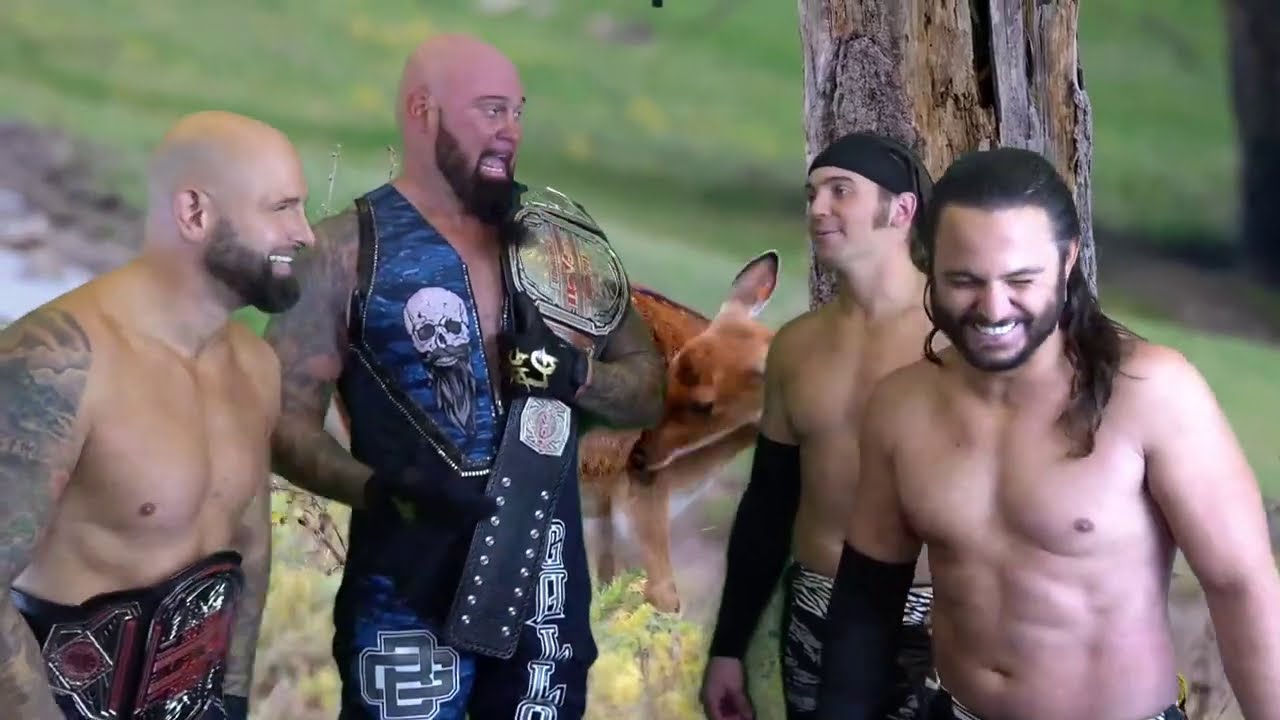 Below are highlights from the latest Being the Elite:

* The Young Bucks and The Good Brothers talk about last week’s match on Dynamite. Matt and Nick joke about Gallows not being able to swing his title between his legs (or pretend to smoke weed) on TNT, and that match needed some heavy editing. Nick says this feels like 2013 again, it’s not a 2021 Bullet Club because “we know it sucks.” He looks at the camera, “this isn’t a storyline, we’re not working with them.” A reference to the NJPW Bullet Club. Young Bucks say they don’t have issues with Gallows and Anderson, but still don’t like Don Callis.

* Clips shown of The Young Bucks and The Good Brother’s match on Dynamite.

* Grayson sees Anna Jay and Tay Conti. He says hey to Anna, and she shoves him over a railing. Conti asks Jay is she likes him. “Are you serious?” Jay responds as the two head off.

* Brandon Cutler talks to Luchasaurus about their match, noting how much got destroyed by Luchasaurus. He offers up a peace treaty showing off his “Dungeons and Dinosaurs” t-shirt. Cutler apologizes for calling Luchasaurus a “fossil.” Luchasaurus accepts and says Cutler maybe needs to learn about some history and sensitivity training. We then see Cutler and Luchsasaurus driving around a parking lot looking at mechanical dinosaurs.

* Dark Order has a slumber party. 5 and Anna show up, Silver says no girls! He kicks 5 out and brings Anna in. The group goes into their makeshift tent to tell stories. Anna eventually leaves and finds Hangman Page in the room. She asks what he’s doing here? She sees another bottle in his hand, “oh, of course.” She tells Page he broke the guys hearts by leading them on, and he needs to go, so the group can move on. She tells Page to take his alcohol and “get the f*** out.” 5 (who was listening in on the party from the couch) saw what happened. Anna says he saw nothing, and if he says anything, he’ll be treated like Stu Grayson.

* Matt Hardy talking with Private Party about how he fired Brandon Cutler up about facing Luchasaurus, then betting money against Cutler (and making big bucks since Cutler lost). Hardy looks at the camera, “this idiot, behind the camera.” Cutler raises up his middle finger. Private Party then go rile up The Good Brothers, they find Gallows sleeping, ring a bell, Gallows goes back to his Festus (“Festus with a ‘PH,’ in case Vince still owns the name”) days and loses his mind for a minute. He doesn’t appreciate Private Party making fun of his terrible gimmick. The duo leaves the room. Hardy is out in the hallway and is happy to hear they got in The Good Brothers’ heads before their upcoming Impact World Tag Team Title Match.

* Nyla Rose on the phone with Vickie Guerrero about getting donations, and maybe have too much money. She tells Vickie to meet her in a secret place to talk more.

* Quick clip of Griff Garrison working on a dance routine.

* BTE Champion John Silver to defend his title against Sammy Guevara in a field goal kicking contest. Sammy Guevara wins the contest to win the title. Silver tells the camera Sammy now has to carry that everywhere he goes. Also, when he gets stopped by security he’ll get ask what he’s the champion of, “Uh, YouTube.” Guevara celebrates a bunch.