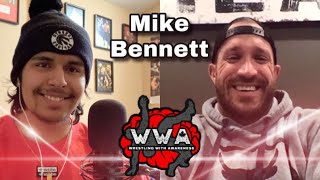 As the current AEW World Champion in addition to being the AAA Mega Champion, Kenny Omega has referred to himself as both the “Real World Champion” and “The Belt Collector.” That latter name indicates that Omega could have an interest in adding more belts to the ones he has such as possibly the Impact World Championship or the Ring of Honor World Title.

Mike Bennett has returned to ROH recently, and even though he doesn’t currently hold any championships, he has interest in stepping into the ring with Omega. The two spent time together in ROH a couple of years ago, but their paths never crossed and Bennett talked about the opportunity to possibly wrestling Omega on the Wrestling With Awareness podcast.

“Well, you know, first and foremost, Kenny’s one of the most gifted professional wrestlers I think I’ve ever seen. He’s had some of the greatest matches I’ve ever witnessed with Okada, and I think his work over in New Japan speaks for itself, the things he’s done in The Bullet Club. But I personally would love to wrestle him,” stated Bennett. “I’ve never gotten in the ring with him; I would have a blast. I think the world of his talent, and if he’s paying attention, please, please, please come to Ring of Honor!”

Thanks to AEW’s partnership with Impact Wrestling, Omega has gotten the recent opportunity to compete in Impact for the first time. ROH and New Japan have a longstanding partnership and we’re seeing these types of deals more and more in professional wrestling.

As someone who’s gotten the opportunity to perform numerous promotions, Bennett was asked about his thoughts on wrestling companies working together.

“I am a huge proponent of jumping to different companies. I am a huge proponent of all of us working together because… spoiler alert, the only reason why companies don’t is because of egos. Because we all can’t just figure out how, like in this sport where it’s predetermined, we can’t get past our own egos to be like, ‘Well I don’t wanna lose and I don’t want this guy to win’ as opposed to being like, ‘No, this moment could be really friggin’ cool for professional wrestling,’” said Bennett.

“And to think of the people who actually spend the money, which is the fans, that’s what they wanna see. So if we could just set our egos aside, and that’s why I love seeing Kenny go to Impact, and then seeing The Good Brothers jump over to AEW. I would love it if Ring of Honor started doing it. I would love to see me and Taven show up at AEW or me and Taven show up at Impact because that’s good for professional wrestling. Me and Taven will put our egos aside, I know The Good Brothers will put their egos aside, like we understand what makes good professional wrestling and… I’m a wrestling fan at heart. I’ve always been a wrestling fan at heart and when I see the possibility the guys could, ‘Oh my God, Kenny Omega could show up at Ring of Honor or Matt Taven, The Kingdom could show up at AEW!’ That excites me as a wrestling fan, not just as a wrestler, but as a fan.”

While there is a clear king of pro wrestling promotions – and that’s Bennett’s former employer – he thinks that all of the other national promotions should band together for shows which would excite fans across the globe.

“I’m like, think of the possibilities. Or maybe once a year we just have a big show where all the wrestling companies – I mean, excluded WWE because I don’t see them ever doing it – but if you think New Japan, AEW, Impact, and Ring of Honor, once a year come together for this massive collaborative show of crossing promotions, like it’s so exciting,” stated Bennett. “I get goosebumps thinking about it as a fan and then as a wrestler, I’m like, ‘Oh, that would just be the coolest thing ever!’

Previous
Toni Storm On Possibility Of Evolution II: “There Will Be Another One, No Doubt”
Next
Premiere Date Revealed For “Wipeout” Revival With John Cena