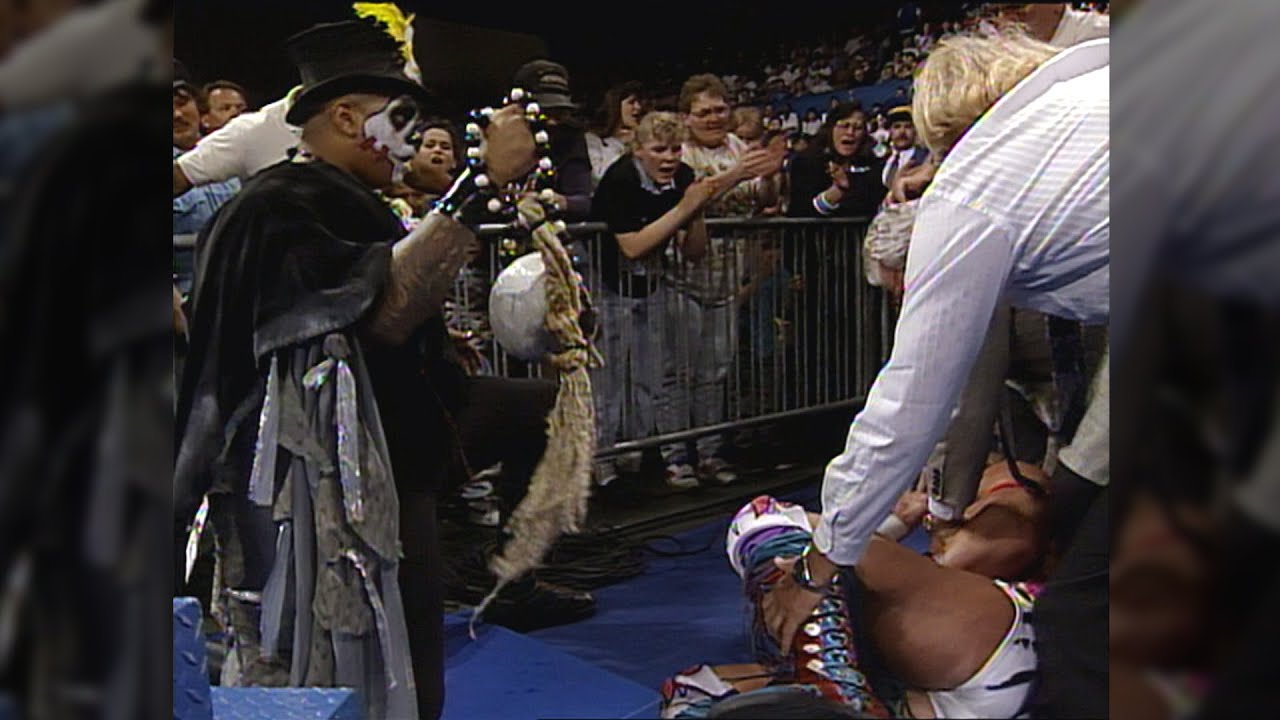 Charles Wright is best known as The Godfather in WWE but he’s had a plethora of gimmicks throughout his career. He’s been known as The Goodfather, Kama, Kama Mustafa and his first extended WWE run came as Papa Shango in the early 90s.

Papa Shango was a unique, ghoulish character that was a voodoo practitioner. Wright talked about that early gimmick when he joined the Scheduled for Two Falls podcast.

“I wish, looking back, I wish I was not so green in the business because I could probably have been better at being Papa Shango like Kamala was at being Kamala,” said Wright. “I probably could have been a better Papa Shango but dude, I had no idea what I was stepping into. Going from a country tobacco chewing, country music listening, old truck driving, biker to a voodoo man. It was a stretch!”

The 1990s was all about over the top gimmicks but Papa Shango was even a little too out there for some old-school wrestlers. Wright talked about some pushback he got from veteran wrestlers at the time who thought his gimmick would kill the business and how he didn’t worry too much about their criticism.

“I was paid to do a job. Wrestling was always my second business. My first was girls and strip clubs,” stated Wright. “Wrestling was just a way for me to have fun. That’s why you’d see me come and go because when I wasn’t having fun, I would go.”

Perhaps the most infamous moment of the Papa Shango run came during WrestleMania VIII during the main event between Hulk Hogan and Sid Justice. After Hogan hit his leg drop for the pin, Shango was supposed to run down and interfere during the pin attempt, causing a disqualification.

But he ran out too late and Sid’s manager, Harvey Wippleman, had to ad-lib by jumping on the apron to cause a disqualification. Shango did eventually make his way to the ring afterwards before The Ultimate Warrior then also ran down to assist Hogan against Shango and Sid. Wright talked about what happened and why it wasn’t his fault.

“That night I never heard anything from anybody at all. I was so involved in what I was doing at the time, working with Hogan, Sid, Warrior; I wasn’t really concerned. The problem is that they knew I was green so they were going, ‘Don’t go until we tell you to go.’ And so, for whatever reason I got the cue late. I didn’t know. I’m there at the curtain like a track star getting ready to run and it was a long way,” recalled Wright.

“So, then they say, ‘GO! GO! GO! GO’ and I went. Once I got there I was like, ‘Oh sh** what’s going on’ because I wasn’t watching the monitors. I never heard anything about it for years and I mean years later. I’m doing autograph signings and people are like, ‘Hey what happened when you missed the cue’ and I’m like, ‘No I didn’t, what do you mean?’ So then when I started checking into it, I’m like, ‘Oh sh**!’ I never heard it from one person, not even Taker and you know why? Because it wasn’t my fault. I never even knew about it.”

As Papa Shango, Wright only had one title match during the year-and-a-half who was under the gimmick. But it was a big title match as it was against Bret Hart for the WWF Heavyweight Championship on Saturday Night’s Main Event.

Wright recalled that match and how there were different opinions on his ability between an agent and Bret Hart, himself.

“They were so concerned about that match because I was so green and only a few years in the business. So, we had to do the match the night before, whatever town we were in, we did that exact same match,” revealed Shango. “Bret was such a cool dude; good worker, good leader. There was one agent who just didn’t even want to have the match, ‘Oh Papa is going to make Bret look bad and it’s going to be the worst thing for his career.’ And Bret stood up for me and said, ‘Nah, he can work. He’s green but he can work.’ So, shout out to Bret for that. Aside from doing it the night before, there was nothing rehearsed.”

The host of the podcast then pointed out that the agent in question was the late Pat Patterson and Wright responded.

“I didn’t say the name! God rest his soul,” said Wright. “After that, I became good friends with Pat. Pat was cool, man. I went golfing with Pat one time and he ended up being cool but yea he was the agent who was hating on me!”

The Papa Shango gimmick ran its course in mid-1993 and Wright disappeared from WWE for a year-and-a-half. He then returned in early 1995 as Kama, who was nicknamed “The Supreme Fighting Machine” and was billed as a shoot fighter.

Wright discussed who the inspiration was for the gimmick and what carrot WWE dangled in front of him to get him to return as Kama.

“I went through a bad divorce as Papa Shango. I became a very mean ugly person. So, I took some time off wrestling. They kept trying to get me to come back and I didn’t wanna come back. So, they said, ‘Hey if you watch this UFC thing, there’s a guy called Kimo [Leopoldo]. He’s got tattoos and he’s pretty over and we’re going to do a thing like that with you,’” recalled Kama.

“I’m not a professional kick boxer/boxer but I’ve always liked training so I’ve dabbled in everything. And so, I’m like… ‘Nah, I don’t wanna do that.’ But then they said I could ride a Harley. I get a Harley out of this? Yea I’ll do it. And then ‘Taker called and I’m like ok I’ll come back. Then they took the bike away from me straight away.”

After a year as Kama, Wright disappeared again for a year-and-a-half. He then returned in mid-1997 and the original plan was for him to be an updated version of Papa Shango. However, when he got to the arena ahead of his debut, Vince McMahon had a new idea and Wright discussed that.

“For some reason they convinced me to come back as Papa Shango but it was going to be a lot different. The makeup was different; Jerry Lawler had done the face paint. I’d lost a lot of weight; looking good, different outfit,” said Wright. “I show up to TV and they said Vince wants to talk to you. I was like, ‘Cool.’ So, I went to Vince and he said, ‘Charles, change of plans. Tonight, we’re going to put you in the Nation [of Domination]. You’re going to wrestle with Ron Simmons against the Undertaker in a handicap match, and you’re going to go over. We made you a little outfit. So why don’t you get with Mark [Undertaker] and Ron and work something out and we’ll talk later.’”

If you use any of the quotes in this article, please credit Scheduled for Two Falls with a h/t to Wrestling Inc. for the transcription.