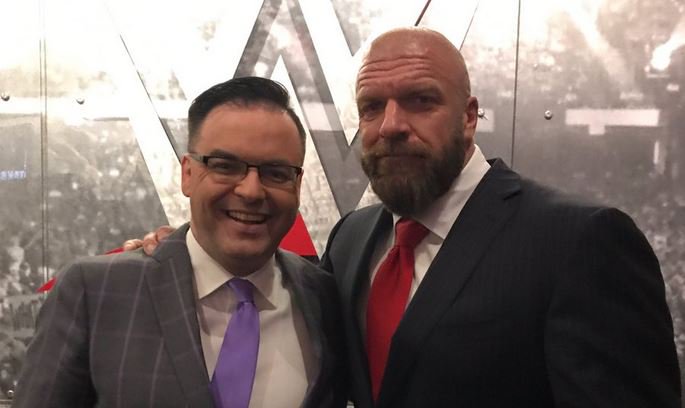 Following a thrilling NXT “Takeover: Vengeance Day” show, Paul “Triple H” Levesque was part of the post-game media call. The full audio of the call can be found on The Wrestling Inc. Daily. Triple H recapped the show, and he answered a question about former NXT play-by-play commentator Mauro Ranallo leaving NXT and his thoughts on the new commentary team of Vic Joseph, Beth Phoenix and Wade Barrett.

“I think they’re doing great,” Triple H stated. “First of all let me say Mauro is phenomenal. I’m a huge fan of his, continue to be a huge fan of his. Circumstances were just right for both sides given everything that was happening in a pandemic world. We stay in touch, and he’s a good friend.

“On the other side of that, the dynamic of Vic, Beth and Wade I’m thrilled with. Vic is coming into his own, and it’s tough. You come in here, and you’re kind of shown the WWE way, and taught a certain thing and you’re trying to find your voice, then a pandemic hits and you get into the mode that you get in.

“And for a while he’s here by himself, and he’s got people from their homes doing it with him. I don’t know if a lot of people even realize that, Mauro was home. We were able to arrange it where he could do commentary from home. Beth was home. They were calling it live seamlessly on the air, but it’s hard, and it’s very very difficult.

Triple H continued and praised Joseph, Phoenix and Barrett for bringing their own vibe for NXT that is different from RAW and SmackDown. He compared the three of them to three friends watching a show together and bantering with each other.

“And only recently in the last three or four weeks, Beth was able to be back here in person,” Triple H noted. “I thought that they had a good rhythm going. I can’t say enough good stuff about Wade. I was a big fan of his when he was working with us. I was a big fan watching what he did outside of here. I was always a fan and wanted to get him here, and the timing wasn’t right.

“Then the timing was right, and I was like, ‘Oh, this is great.’ Got it him and he hasn’t disappointed. He’s a pro’s pro. He just has a knack for it and a feel for it. Vic is now really coming into his own and so is Beth, especially being here. So difficult to do from a distance, but being here, what I love about it they come across as three people that genuinely like each other like they would if it was three friends sitting on a coach watching the show and having a good time bantering with each other, even though one of them is calling play by play.

Triple H also took time to discuss Takeover. He gave his thoughts on the show noting that every single match stole the show.

“This is one of those nights that you can look across this card and honestly say every single match on the show, if you look at them one by one, that will steal the show. It was that kind of card, and across the board they didn’t disappoint,” Triple H said. “Everything seemed to get better. For me, The Dusty Cup, it’s a very important event. I take it very seriously. I take Dusty’s name on it very seriously.

“He was a creative partner for me here. He was a mentor. He was a lot of things in a lot of ways, and I take it very seriously that his name is on that. It wasn’t just a ‘oh, let’s throw his name on something and go with it.’ Tonight, maybe, one of the first nights we had four different teams competing for a Cup with his name on it and I don’t if he had ever met any of them.

“And that’s unique. His influence spans now as it would for so many reasons, but just in this, it carries on through different generations of young performers that I think he would look at and go, ‘I’m so proud of you in what you’ve accomplished and how you’ve grown since you’ve been here.'”

Triple H continued where he called MSK vs. Grizzled Young Veterans a “masterclass in tag team wrestling.” He later noted that everyone on the show came out injury free.

“Kushida and Johnny, which was just incredible. To MSK and Grizzled Veterans, just a masterclass in tag team wrestling,” Triple H expressed. “Io [Shirai], Toni [Storm and] Mercedes [Martinez] putting on a different level of something that just spoke to a different mindset that all the other matches did before that.

“And then going into [Finn] Balor and Pete [Dunne], the technical ability in match was off the charts. Only certain people can appreciate the technical aspect of what’s in there. Not only was it technical but the story that they told within that technical wrestling was just so good and just so masterclass. To me, I felt this was a Takeover that felt back to the beginning and back to the brand.

“I want to thank Brandon Walker for being here and Barstool Sports for their support. I believe, barring something that I’m not aware of, we were injury free tonight. So when you put on the level of performance that everyone did, that’s an amazing statement as well.”