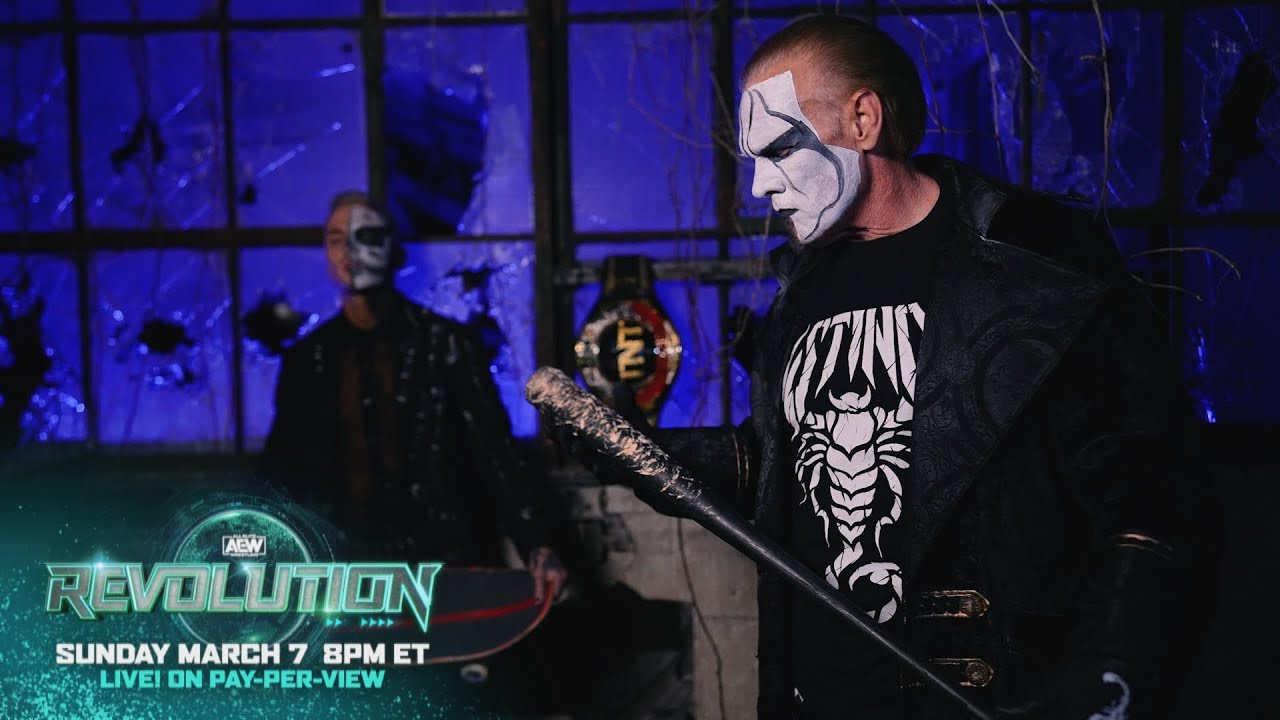 The second annual AEW Revolution moves to Sunday night, March 7th, at 8pm ET (The Buy In pre show starts at 7:30pm ET) from Daily’s Place in Jacksonville, Florida. The event will be available on traditional PPV ($59.99) & stream on BR/Live ($49.99). Cody Rhodes went on record a little over a year ago saying that he hopes that Revolution will become the WrestleMania for AEW. Last year’s Revolution was the last great wrestling show in front of a live crowd before COVID and this year’s card is filled with potential to top last year’s event. The special attractions for the evening are an exploding barbed wire death match for the AEW Championship, the return of Sting to active competition, the “Face Of The Revolution Ladder Match” will have a debut and Paul Wight will introduce a “Hall Of Fame” talent that will sign their new AEW contract live at Revolution. The card features eight matches with an additional match on “The Buy In”. Below is a preview of each match on the card and predictions based upon recent booking. In the comments, please share your expectations, what you’d like to see, and predictions for the event.

After losing the non-sanctioned match to Jon Moxley at Full Gear in 2019, Kenny Omega hit a wall. Earlier in the year, Omega lost the inaugural AEW Championship match to Chris Jericho. Omega’s failures led to a tag run with Adam Page as Kenny rebuilt himself into The Cleaner persona. This Kenny Omega is not the same wrestler that Jon Moxley faced at Full Gear. Omega is calling himself “The Belt Collector”, evoking Thanos from “The Avengers” movies. Moxley is due for some time off with the impending birth of his first child. What better way to take some time off than to lose an Exploding Barbed Wire Deathmatch to help build the most powerful villain in wrestling? Moxley was tremendous as champion during COVID and he’ll get an opportunity to be champion once again, but it won’t happen Sunday. As AEW’s American audience finally sees hope in our country on a path towards defeating COVID, we are ready to be hurt by wrestling again. Kenny Omega’s Thanos-like reign of darkness will only grow as all roads seem to lead to Omega facing his former partner and current NJPW World Champion: Kota Ibushi. Omega will overcome his past failure to display a new level of violence and brutality that will strike fear into the hearts of wrestling fans around the world.

The biggest criticism of AEW has been the weakness of their Women’s division. After the 16-woman single-elimination tournament to determine the #1 Contender for the AEW Women’s World championship, that criticism has been silenced. Thanks to the subsiding of COVID, travel restrictions have been eased between The United States and other countries. AEW can finally take full advantage of their international roster and the women delivered. The finals match between Ryo Mizunami & Nyla Rose showcased Rose’s growth over the past year and Mizunami’s violent charisma.

Hikaru Shida has had consistently great matches since arriving in AEW and this match will raise the bar for women’s wrestling in AEW. AEW has assembled an impressive roster of female talent over the past year, turning what was once a weakness into a strength. Mizunami has captured the excitement of AEW’s audience and will ride that momentum to end Hikaru Shida’s reign as AEW Women’s Champion.

The Young Bucks (c) vs. Chris Jericho and MJF with Wardlow

MJF & Jericho crossed a major line when they attacked The Bucks’ father on Dynamite two weeks ago. Jericho and MJF must face retribution for their sins and the Jackson brothers will bring the slapjack. Since adding MJF to The Inner Circle, Jericho is having the same success he was having in the tag division with Jake Hager. This begs the question: what is the benefit of MJF in The Inner Circle? The answer is: MJF is destroying The Inner Circle from within. MJF’s manipulation of Jericho led to the departure of Sammy Guevara from The Inner Circle and now MJF & Jericho have incited rage from the Christian AF Young Bucks. The Bucks will not hold back as Jericho and MJF will eat more super kicks in this match than they have their entire careers. Wardlow is a force on the outside, but The Young Bucks seem almost as motivated as Kenny Omega to prove that they are the best tag team in 2021 and they will find a way to neutralize the big man. The Bucks will win here and send The Inner Circle further into disarray as the once powerful faction seems headed towards a break-up.

The Young Bucks via pinfall

Being forced to retire from injury never sat well with Sting or wrestling fans. Modern medicine combined with the intense rehabilitation effort from the Stinger made this match possible. After having so many dreams put on pause last year, having the dream of Sting returning to the ring become a reality has been one of the most positive stories in wrestling. Bryan Cage & Ricky Starks are tremendous athletes and excellent heels. They will make sure that this match exceeds everyone’s expectations. Darby Allin is sure to pull out the type of stunts that make us worry for his safety. The heels will work our worries for the safety of our heroes into a fun match that will deliver a mix of nostalgia and highlight Allin as the future.

FACE OF THE REVOLUTION LADDER MATCH

This field of wrestlers is an incredibly impressive midcard for AEW. Rumors of the wrestler to be announced lean heavily toward Cody Rhodes’ former tag team partner: Ethan Page. Page has mostly seen tag team success in his career and was a part of “The North” in Impact wrestling. At 6’2”, Page has the size and talent to excel as a singles competitor in AEW. Lance Archer looked tremendous in his defeat of Rey Fenix to earn his spot in this match and feels like a logical favorite to win here. Archer could present a tremendous challenge to Darby Allin due to their extreme difference in size. If Ethan Page debuts, he’ll likely have some business with his former tag team partner, Cody. If Cody is neutralized by Page, then Archer will power his way to victory.

Tony Khan revealed that the signee is a man and “one of his favorite wrestlers”. Add this information to Wight’s hint that the talent is “Hall of Fame” worthy and it points to: Kurt Angle, Mick Foley, and Brock Lesnar. Adding Lesnar to AEW’s roster doesn’t make sense yet, but he is the most notable free agent in wrestling. After seeing Conrad Thompson on this past week’s Dynamite, it seems natural that the newest talent in his podcast network would be open to an offer from AEW. Kurt Angle has expressed that he feels that he has more to offer the world of wrestling and Tony Khan has said that he wants more veteran talent to work with the young guys on his roster. In addition to his extensive credentials inside the ring, Angle’s experience as a producer for WWE and his love for the entertainment aspect of wrestling make him the most attractive and likely person to be the newest signee to AEW.

AEW’s tag division depth will be on display in this battle royal but Pac/Rey Fenix is the only team that has two future world champions. This match will be full of high-flying spots and likely hard-to-follow at points but it will certainly not be boring. PAC & Rey Fenix will be an awesome challenge for The Young Bucks. Look for the two members of Death Triangle to look dominant in this victory.

Matt Hardy attempted to take advantage of Page’s struggles with alcohol by convincing a visibly drunk Page to sign a contract that would make Hardy his manager for 30% of his earnings. Page revealed the next week that the contract was for a match against “Big Money” Matt Hardy at Revolution for 100% of his Q1 earnings this year. Page is undefeated in 2021 and with the support of The Dark Order, Page is on track for happier times in 2021.

Orange Cassidy and Chuck Taylor vs. Miro and Kip Sabian with Penelope Ford

Miro needs some momentum in AEW. Miro had one of the most memorable moments at WrestleMania 31 and is capable of so much more in AEW. Chuck Taylor is going to help Miro get there. Orange Cassidy set the Wintrust Arena on fire one year ago but he’s not needed in that capacity on this show. Cassidy will have moments in this match, but the energy all feels centered around Miro’s rage toward Chuck Taylor. If Miro can channel his rage, he’ll be able to break out of the funk he’s been in since arriving in AEW.

Thunder Rosa and Riho vs. Britt Baker and Reba

Thunder Rosa has been in a groove since arriving in AEW and will make this match exceed expectations. Britt Baker is due for a win after an impressive losing effort to Nyla Rose two weeks ago on Dynamite. The Women’s Division in AEW has depth now, but needs to continue to build strong heels for babyfaces to overcome. Baker & Reba continue to grow and a win here will keep them hot as they stir up the AEW Women’s Division with their antics.