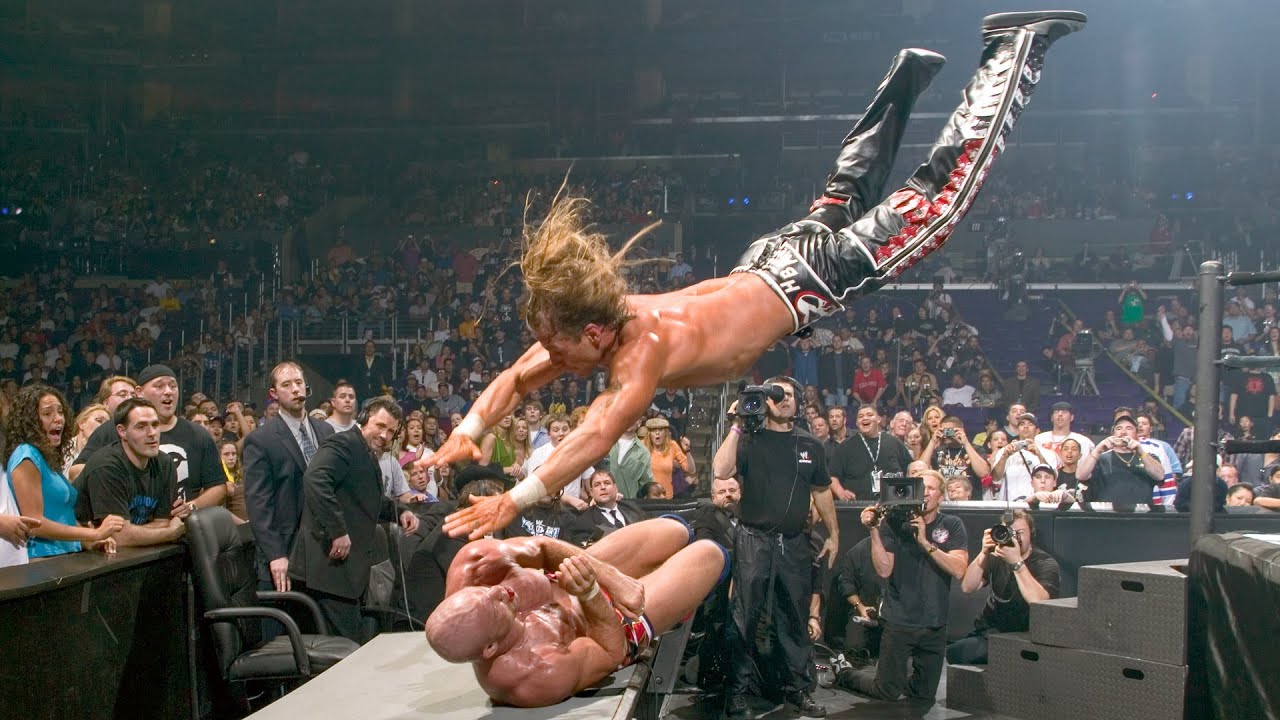 During the latest episode of The Kurt Angle Show Podcast, Kurt Angle talked about using his actual gold medal that he won at the 1996 Olympic Games in the WWE. Angle says he used the medal when he first started with the company, but when a scary situation happened where the medal was stolen by a fan, he had WWE create fake ones. Kurt detailed the story, and described how he was lucky a friend of the person who stole the item was around to call him and bring his medal back.

“When I started, I used my gold medal and I used it religiously,” Angle said. “I also had about 15 other gold medals, the one real gold medal had green material on it. Then what happened was after I debuted I was in Baltimore at a show, I went outside and there were about 5000 fans waiting there. They’re going to want my autograph so I put my bag down to sign autographs and my gold medal was in it, one of the fans stole it.”

“I was going to call the police but I called Vince McMahon instead. Earlier that night during the show, Stephanie McMahon walked out down the ramp and someone threw a baseball at her. Vince McMahon went to security and said ‘You find the SOB that did that. I don’t care how much money it takes, you tell fans you keep offering them money until they say yes.’ They ended up doing a really high number and then one fan said he did it! I was thinking in my mind, Vince could do this for me right now. I called Vince and he didn’t answer.

“I hung the phone up and I said ‘Someone stole my gold medal,’ “ Angle said, as he continued to tell the story. “Thank god a fan called that fan that stole it on their cell phone and said ‘That bag didn’t have t-shirts or merchandise in it, it had Kurt’s real gold medal, you need to bring it back.’ The fan brought it back and he said he found it around the corner next to a bus, like whatever but thanks for bringing it back.

“Long story short, I stopped using my gold medal right then and there,” Angle said. “Vince McMahon decided to make three duplicates that looked exactly like the gold medal. They weren’t gold, but they were made out of medal. I used those and two of them got stolen. Whenever I would have my match I would go out to the ring, take my medal off, place it on the mat or steps and wrestle my match and one of the fans hopped over and grabbed the medal and hopped back and ran away. That happened twice, there was only one left by the time I left the WWE.”

Angle continued to talk about WrestleMania 21 and his match with Shawn Michaels. He said the match was a dream of his to have and Shawn was someone he wanted to wrestle since the day he met him.

“Wrestling Shawn was a dream come true,” Angle said. “Going into it we ended up having the story and angle start at the Rumble and I was so excited. I first saw Shawn wrestle at Survivor Series a couple years prior and I didn’t watch him wrestle before, I was in awe. The way he sold and his technique, his charisma, I mean Shawn Michaels is without a doubt the best performer I’ve ever seen.”

Angle said the match between him and Shawn started to be built at the Royal Rumble. He said that match with HBK was a match he wanted badly and to work with him would be a dream of his.

“I found out the day at the Royal Rumble,” Angle said. “When I was told I was going to go into the ring during the Rumble and get eliminated in like one minute. It was a pretty quick Rumble for me, Shawn superkicked me over the top rope. It was a really exciting time for me because I badly wanted to work with Shawn.”