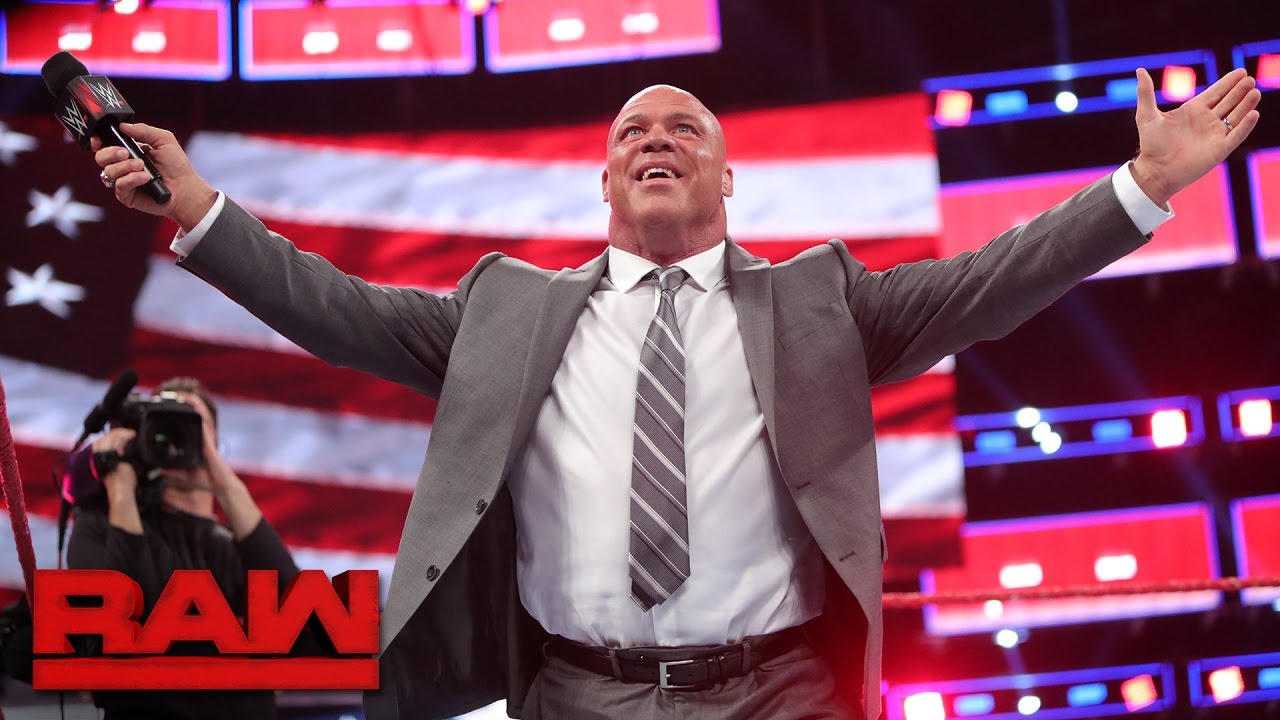 Kurt Angle recalled during a recent episode of his podcast, The Kurt Angle Show, about the moment when he realized he had to retire from WWE. He said he got the feeling that his time with WWE wasn’t going well when he was being pinned left and right and putting over younger talent. Angle said he thought he could give WWE a lot more and wanted to be put in a position where he had more motivation to be with the company.

“I would say the Drew McIntyre match,” Angle said. “When I had to really really really put him over, I even tapped out to my own Ankle Lock. It was a complete domination of a match. I knew then, I read between the lines and realized this company has no plans moving forward with me. If I continue to do this, this is what I’m going to do, I’m going to lose quite a bit. There’s no problem with that, but being at the level I was I just felt I could’ve given more and possibly been in a world title run.

“I’m not saying I deserved to be, but if I had that option, I would have motivated myself even more to get even more prepared. If Vince [McMahon] would’ve told me at the beginning when I just signed with the WWE and signed in 2017 and said ‘Hey, we’re going to utilize you wrestling, don’t worry about it.’ I would’ve been training everyday still, I would’ve been in the ring everyday. Not knowing and being the GM every week, I just let it go and it was my own mistake.”

Continuing to talk about his frustrating booking with WWE, Angle said the creative overall during his second stint with the company was a mess. He compared the booking in the 90s and 2000s in WWE to today.

“It was really hard to guess who was going to wrestle who,” Angle said. “Things weren’t structured out as neatly as in prior years. They usually have the WrestleMania cards by December at the very latest, this one it wasn’t ready for quite some time. I don’t think they put together the whole card entirely till the week before [WrestleMania 35].”

One of Angle’s most memorable rivals during his time away from WWE was AJ Styles. Angle mentioned how Styles spent most of his career outside of WWE, but felt that Vince McMahon would eventually see the value in Styles.

“I knew Vince would see the value,” Angle said. “What AJ needed, because he did try out for the WWE back when he started wrestling, he was good but he didn’t have a name. He built up his name in TNA and NJPW, built it up big enough that many fans knew who he was. The gauge was when he came out at the Royal Rumble, the fans were so excited it was AJ Styles. A lot of WWE personalities don’t think WWE fans watch TNA wrestling, I think they do because they knew exactly who AJ was and I think Vince saw the reaction and said wow this guys a star already. He hasn’t even been here, this is his first day and he’s a star.

“He had to build a name for himself and he did it right. It’s a shame that AJ ends up in WWE when he’s in his 40s. I was told Vince when he met up with AJ after AJ won the world title, Vince went to him and said ‘I wish I would’ve hired you 10 years ago.’ That is that, that tells you exactly how Vince feels about AJ. AJ is a star, when he came into WWE at that particular time, he was the #1 top wrestler in the world. He was the best performer just from a wrestling standpoint, he was the top guy.”