A judge has dismissed WWE and Gabe Sapolsky from the lawsuit filed by Samantha Tavel, a.k.a. Candy Cartwright, against both parties and Matt Riddle. United States District Court, Northern District of Illinois Judge Manish S. Shah dismissed WWE and Sapolsky “without prejudice for lack of personal jurisdiction.” Riddle’s motion to dismiss was denied.

Tavel had filed a civil lawsuit against WWE, Sapolsky and Riddle last October seeking $10 million per defendant for various damages, emotional distress, attorney’s fees, and court costs. Tavel claimed that Riddle committed a series of assaults against her from 2017 through January 2020. She alleges that Riddle first sexually assaulted her in April of 2017 in a parking lot after an EVOLVE show. She claims that Riddle forced her to perform oral sex on him on a bus with other wrestlers after an EVOLVE show on May 19, 2018. Details of Tavel’s claims are at this link.

Judge Shah ruled that Tavel failed to demonstrate specific personal jurisdiction lies over WWE. In a sworn affidavit, WWE stated that they had no involvement in the May 2018
wrestling event and didn’t even employ Riddle at that time.

“Tavel offers no evidence to rebut these facts, so I accept them as true, notwithstanding the complaint’s allegation that WWE controlled Evolve’s events,” Judge Shah wrote in the ruling. “To establish personal jurisdiction, Tavel needed to come forward with evidence to establish a prima facie case over WWE. Because WWE wasn’t involved in the May 2018 event around which Tavel’s injury occurred, her injury didn’t arise out of WWE’s Illinois-related activities. And though she vaguely refers to WWE’s holding events worldwide, and specifically in Illinois, she doesn’t explain when or how WWE held events in Illinois. WWE’s connection to Illinois is vaguely sketched, and its connection to the conduct alleged in Tavel’s suit is nonexistent.”

As for Sapolsky, the judge ruled that Tavel failed to meet her burden regarding Sapolsky. According to Sapolsky’s affidavit, Riddle and Tavel took different transportation after the May 2018 Evolve show to the next event in Michigan and he wasn’t in the minibus where the assault occurred.

“Tavel doesn’t rebut these facts either, so I take them as true,” Judge Shah stated. “Tavel hasn’t sufficiently established a connection between Sapolsky’s Illinois contacts and the claim at issue. She accuses Sapolsky of encouraging or assisting Riddle’s behavior. But Sapolsky didn’t know about the assault and wasn’t in the minibus where it happened. And there’s no allegation that Sapolsky encouraged Riddle’s behavior in the course of his contacts with Illinois. It’s unclear when or where that alleged encouragement occurred. Tavel argues only that Sapolsky was physically present in the state at the time of the assault. Of course, physical presence in the forum state is a ‘relevant contact.’ But when there’s no connection between the defendant’s contacts with the state and the underlying controversy, ‘specific jurisdiction is lacking regardless of the extent of the defendant’s unconnected activities in the State.’ Tavel hasn’t sufficiently linked Sapolsky’s activities in Illinois with the conduct underlying her suit.”

The court ruled that although Tavel’s allegations are contested, they are plausible “and they suffice to put Riddle on notice of the conduct he’s accused of.”

Riddle’s answer to the complaint is due on April 14, 2021, “and the parties shall file a joint status report on April 21, 2021, with a proposed discovery schedule.”

You can see Judge Shah’s ruling below. If you use any of the portions from the ruling in this article, please credit Wrestling Inc. 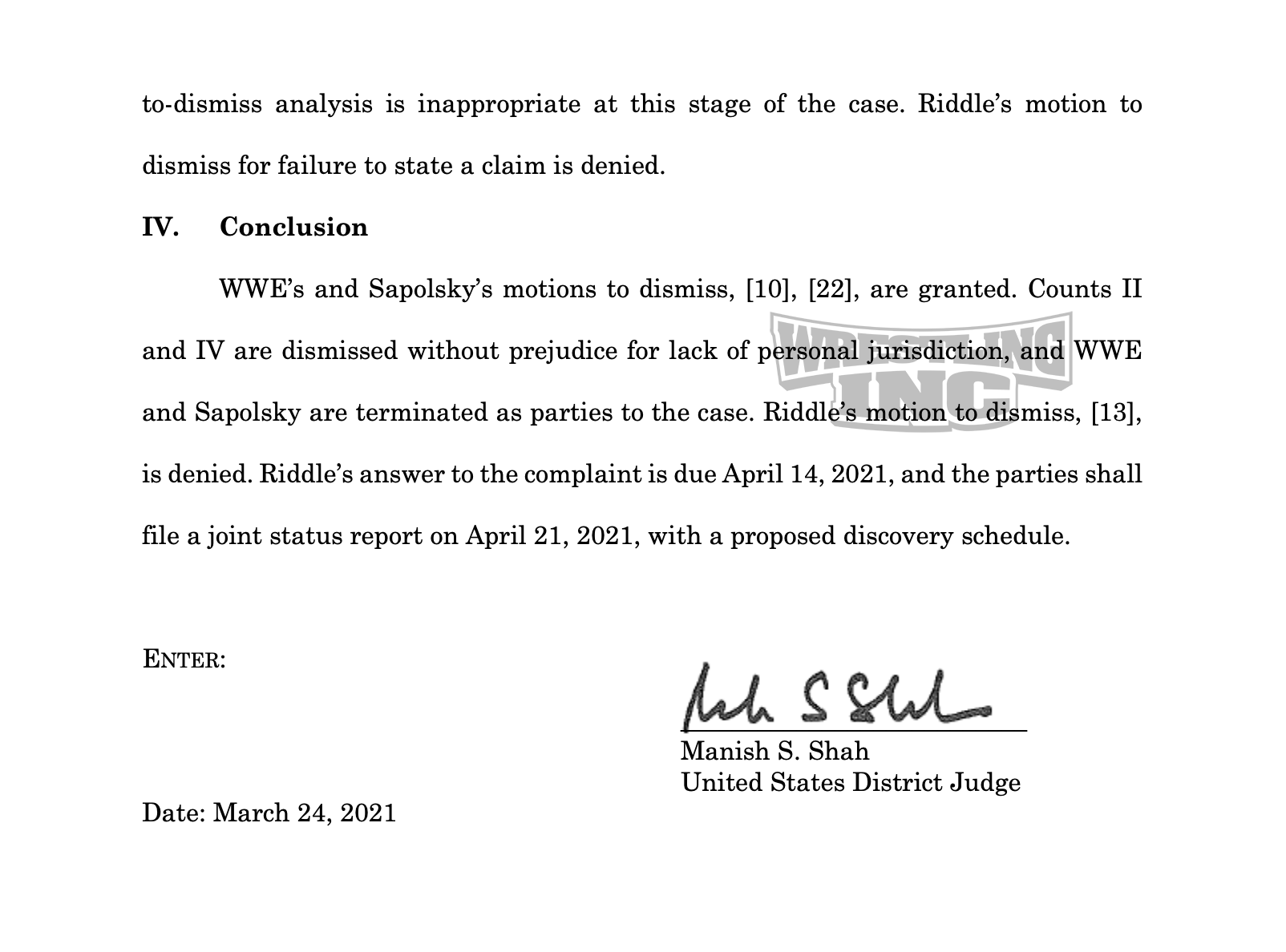