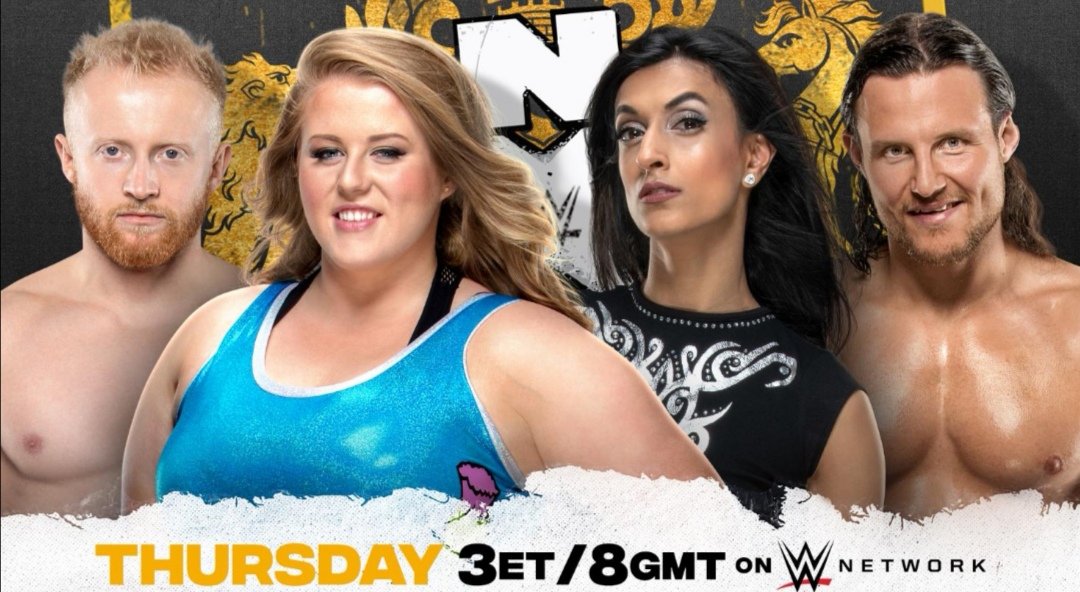 Welcome to Wrestling Inc’s live coverage of WWE NXT UK, which airs every Thursday at 3 PM EST on the WWE Network. Be sure to chime in on your thoughts about today’s show in the comments section below. Additionally, share our live coverage through social media. Make sure to click the REFRESH button to continue to get the most current up to date coverage. Above and below is what’s on today’s agenda:

Dave Mastiff and Tyler Bate begin the match with lockup. Mastiff backs Bate towards the ropes. They reset. Mastiff controls Bate’s wrist and takes him down on the mat. Bate counters with a side headlock. Mastiff throws him off. Both men go for a Greco-Roman lockup. Mastiff bends Bate downward and onto the mat. Bate bridges out twice. Mastiff locks in a tight waistlock. Bate breaks the grip. Mastiff flips him over. That concludes the first round.

No points were awarded.

Mastiff applies another simple wristlock. Bate rolls through and kicks out of the hold. Bate irritates Mastiff with a boot to the nose. Bate rolls Mastiff up for the first pin in the matchup.

Bate is in full control with some stiff kicks in the beginning. Mastiff breaks his momentum briefly. Bate flies off the middle rope, then tries to lift The Bomber. Mastiff catches Bate with a rollup. Mastiff gains his first point.

Mastiff dominates Bate with multiple powerslams. The referee checks in on Bate. Bate continues. Mastiff plants Bate with a potent powerbomb. Cover. Bate gets his shoulder up at two. Mastiff meets Bate outside and throws him back and forth between the barricade and the apron! The referee begins the count. Mastiff makes his way back into the ring. Bate slides in by the 9th count. Mastiff drops on top with a senton. Cover again. Bate kicks out. Mastiff goes for another. Bate kicks out again. The bell sounds for the end of round four.

Neither man gains a new point.

Bate tries to lift Mastiff up for a German Suplex. His back gives out, which helps Mastiff take control of the match. Mastiff throws Bate towards the corner. Mastiff almost breaks Bate in half with his own German Suplex. Bate finds an opening on Mastiff and hoists him up for an airplane spin! Bate climbs to the top and flies off with a corkscrew senton bomb! Bate goes for the cover. Mastiff doesn’t kick out. Bate gains a second point and wins the overall match.

– Mark Andrews and Flash Morgan Webster admit that they respect their tag team opponents today – Amir Jordan and Kenny Williams. But they want to be the next in line for the NXT UK Tag Team Championship. They hope they’ll pick up the win tonight so they can focus on becoming the two-time champions.

– Next week, NXT UK will change their time of broadcast to 4 PM EST.

Up next, we’ll see the debut of Teoman

Teoman slides behind Danny Jones with a tightly held wristlock. Jones sends Teoman into the corner. Teoman connects a strong chop to escape. Teoman catches Jones with a driving forearm. Teoman continues his aggressive offense by grinding his boot into Jones’ face. Jones capitalizes on an opening with a knee to the spine. Teoman leaps off the top rope with a missile dropkick, followed by a double stomp to the spine! Teoman goes for the same maneuver begin before putting Jones in a crossface. Jones taps. Teoman wins his debut match.

Earlier this week: Xia Brookside tricks Nina Samuels into thinking she made a huge mess in her house for her to clean up.

– We see the consequences The Hunt must suffer through after losing a chance at the tag team championship last month.

– Amale wants to prove to NXT UK why they made the best decision in choosing her as their first-ever French female athlete.

– Next, we see Gallus playing pool. They are ready to get back to the ring to prove themselves and reclaim their NXT UK Tag Team Championship.

Kenny Williams and Flash Morgan Webster begin the matchup. Both men exchange back and forth lockups. The pace quickens when Mark Andrews and Amir Jordan make their way into the ring. Even after two roll-throughs, Andrews keeps a tightly held wristlock on Amir Jordan. Jordan looks for a bridged pin. Andrews kicks out. Flash Morgan Webster comes in briefly to soften Jordan up some more before Andrews is back in. Andrews connects a strong uppercut before shoving Jordan towards his corner. Webster is back in.

Jordan creates some space with several forearms to the ribs and a dropkick. Jordan hooks the leg for a pin. Webster kicks out. Jordan desperately needs a tag. He makes one out to Kenny Williams. Williams drops down with a heavy knee on Webster. Next, he follows it up with a flurry of heavy strikes. Jordan is tagged back in. Down goes Webster. Jordan goes for a pin. Webster keeps himself alive at two. Andrews is back in and fires away on Williams and Jordan. A rana from Andrews takes Jordan out on the outside. Andrews shoves Williams towards his corner for another tag out to Webster.

Williams slings Webster over his back to make a tag out to Jordan. Jordan rolls Andrews through. Andrews kicks out and slugs him with the Slumdog Millionaire for a two-count on Jordan. Now, Williams and Webster make their way back in. Williams clocks Webster with a powerful uppercut to the jaw. Williams with a cradle pin. Webster kicks out. Williams catches Webster with a low blow kick while falling into the referee. Jordan is not pleased with his partner’s tactic to win the match.

– We look back on Ilja Dragunov’s vicious victory over Sam Gradwell. Next week, Dragunov will speak out for the first time about that match and the wild outburst that followed it.

– Next week on WWE’s The Bump, the panel will do a live weigh-in with Trent Seven to see if he has made weight for his shot at the Cruiserweight Championship. Seven says it if weren’t for Tyler Bate; he wouldn’t have gotten this far.

It's all about putting in the work and getting the results for @trentseven!

The official weigh-in takes place THIS Wednesday on @WWETheBump.#NXTUK pic.twitter.com/2qxxdiLN11

– Next week, WALTER will return to NXT UK to make a statement!

– After proving himself week after week, Ben Carter is ready to transform into Nathan Frazer.

"And with a brand new start comes a brand new name. NATHAN FRAZER will become a champion."@WWEFrazer#NXTUK pic.twitter.com/KMK5yyuTru

And now, the main event! This is the first-ever mixed tag team match in NXT UK history!

Jinny taunts Piper Niven before tagging Joesph Conners in for her. Jack Starz has to come in for Niven. Both men go straight for a collar and elbow tie-up. Conners turns it into a lateral press pin. Starz kicks out at two. Conners drives his arm in and tries twisting Starz’s head. Starz turns it around by isolating Conners’ arm with a short-arm scissors. Starz catches Conners with a dropkick before tagging in Niven.

Jinny attacks Niven, who’s busy making sure Conners stays down on the outside. Niven goes for a drop toehold before leaping on top of Jinny with a senton. Jinny runs right towards Conners for a tag. Jinny hits Starz on the outside. Conners plants a natural press for two. Conners with a cover. Starz kicks out. Conners rocks Starz with a heavy forearm and a stomp in the corner. Starz goes up and over with a missed splash.

Conners slugs away on Starz. Starz tries to create some separation with uppercut after uppercut. Starz makes the tag out while he’s in an ankle lock. Jinny goes running around the ring after Niven is tagged in. Back in the ring, Niven lands a big crossbody off the ropes. Jinny rolls through with a heel kick. Niven smashes Jinny with a ruthless headbutt. Niven and Starz connect in stereo sentons in the corner. Niven drops Conners with the Piper Driver before dropping Starz on top of him. Starz and Niven make history as the first-ever mixed tag team victors in NXT UK!