The WWE WrestleMania 37 Ticketmaster pre-sale is kicking off at 10am ET this morning.

WWE has announced that the first pre-sale password is UNIVERSE.

The pre-sale will run from 10am until 11:59pm ET. Tickets will then go on sale to the general public at 10am ET on Friday.

WrestleMania 37 will be limited to an overall ticket limit of 8 tickets. Night 1 and Night 2 will each have the 8 ticket limit. A door time of 4:30pm local time has been announced by Ticketmaster, while the start time of 6:30pm has been confirmed. Ticketmaster previously confirmed that WrestleMania 37 will use socially-distanced pod seating at Raymond James Stadium. The following COVID-19 safety message was released to fans purchasing tickets:

“These events use seating in pods of 1 to 6 people per pod. Pods must be purchased in their entirety and may not be divided. Tickets in a pod may not be sold or transferred to anyone other than family/trusted acquaintances who have chosen to attend the event together, unless all such tickets (i.e., the full pod) are being sold or transferred to one party. Unless otherwise exempted by law, guests must wear a face covering – local venue rules apply.”

WWE originally wanted 45,000 fans at Raymond James Stadium for both nights of WrestleMania 37, but it was revealed on Wednesday that capacity has been dropped to 25,000 fans for each night due to COVID-19 safety protocols.

WrestleMania 37 takes place on Saturday, April 10 and Sunday, April 11 from Raymond James Stadium in Tampa, Florida. Matches announced as of this writing are Edge vs. Reigns, McIntyre vs. Lashley, and Belair vs. Banks.

Stay tuned for more. Below is the pre-sale poster along with the seating chart: 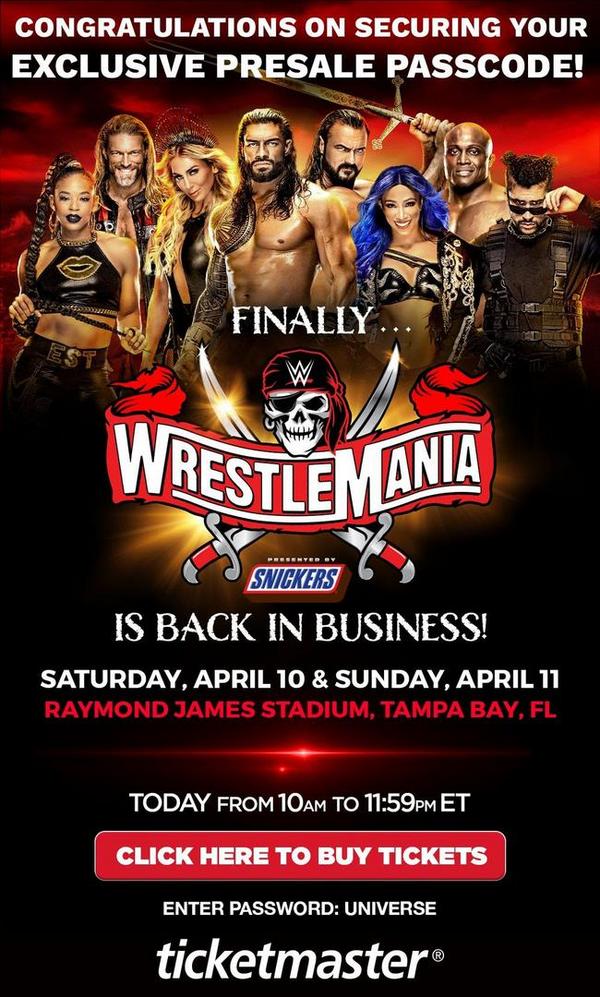