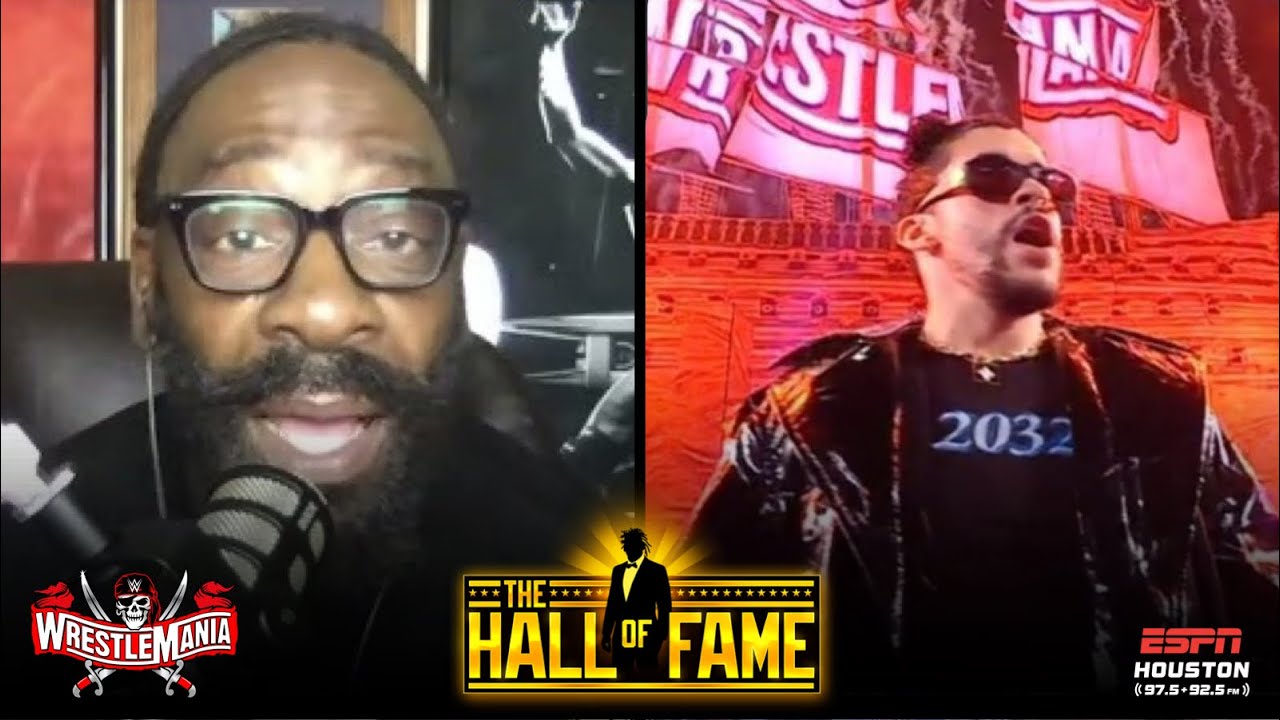 On the latest episode of the Hall of Fame Podcast, Booker T spoke about Bad Bunny’s performance at WrestleMania 37 last weekend. The Puerto Rican rapper teamed with Damian Priest to defeat The Miz and John Morrison]. Bunny did several high flying moves including a dive off the top rope onto the two on the outside, a Hurricanrana and a Canadian Destroyer outside of the ring on Morrison.

As someone who Bad Bunny wrote a song about, Booker T said he really appreciated seeing Bunny perform the way he did at WrestleMania. He said talking to him and knowing how big of a fan of wrestling he was in his youth, he knew he was going to surprise people with his performance.

“Going into the thing it could be one of two things: it could be really good or they really screwed this one up,” Booker said. “I must say, Bad Bunny, he definitely put in the work. One thing about Bad Bunny, this dude is a real fan. He’s a real fan of professional wrestling, he’s been watching it for years just by writing a song about me.

“That let me know he was a kid who watched this thing we call professional wrestling. Sometimes when you watch it from that perspective, you have an inkling of what it is, not saying you actually really know how to do it, but you kind of feel like you know how to do it.”

Bad Bunny and Priest ended up victorious in the match leaving many to suggest Bunny could possibly wrestle another match, however that reportedly is not in the cards. The two-time Hall of Famer continued to talk about Bunny’s performance, saying that Bunny had to be able to figure it out and scratch and claw to get where he is.

“That right there tells me something, he didn’t grow up with a silver spoon in his mouth,” Booker T said. “He had to figure it out, lifelong fan of professional wrestling, that tells me he loves this. As a kid, Bad Bunny, watching professional wrestling, there’s no way in a million years he thought he’d be at WrestleMania in a tag team match. There’s no chance in hell that kid thought that. He was prepared for that moment and he went out there and knocked it out.

“There’s so many guys that would’ve been in that position and wouldn’t have known how to handle it, wouldn’t have known how to take that moment and make it there. This dude from the outset of that match to the end, worked, that’s what workers do. I give Bad Bunny superstar status now, WWE Superstar status because that’s how good he went out there and did.”

The Miz has been receiving a lot of credit for his performance in the match and throughout the build up for the match. Booker said he gives a lot of the credit to Miz and Morrison for their ability to sell for the singer.

“Let’s not get too far past where credit should be given and that’s to The Miz,” Booker said. “The Miz did so much work in that match. John Morrison did a lot of work as well but The Miz literally stepped up to the plate and did all the stuff I talk about as far as your loss’ gotta be better than your wins. He may not be that good of a wrestler, but you gotta make him look like he’s a million bucks, better than he thought he could make himself look.

“You got to do that for him and Miz and Morrison, those guys went out and stepped up to the plate and were so professional, doing their job and making Bad Bunny look like literally the ultimate superstar at WrestleMania. That’s a moment.”