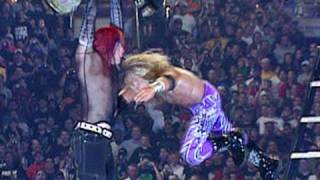 On a recent episode of the Grilling JR Podcast, Jim Ross covered the memorable WrestleMania X7 pay-per-view that was headlined by Stone Cold Steve Austin and The Rock facing off in their second WrestleMania main event against each other. This show is widely regarded as one of the greatest pay-per-views that WWE has ever produced featuring. The show featured a stacked undercard that included Triple H vs. The Undertaker and the first ever TLC match.

The tables, ladders and chairs match featured The Hardy Boyz, Edge and Christian and The Dudley Boyz and was for the Tag Team Championships. This match created the TLC match and gave WWE the ability to make it into a brand and eventually name it a pay-per-view. Jim Ross spoke about the impact these six superstars had on the business and how that match changed the landscape of wrestling.

“The great thing about these guys, they all six ran with the opportunity,” Ross said. “Christian is now with us in AEW, he’s going to be a big player for us, he’s still got plenty of matches left in him. He’s got unfinished business he wants to prove for his own legacy. Edge is back headlining WrestleManias, he’s in the Hall of Fame. The Hardys, I don’t know if the Hardys will ever make it to the Hall of Fame in WWE because of Matt’s relationship with AEW which would be a crime. And of course, Bubba and Devon are in the Hall of Fame.

“[The TLC Match] opened up the eyes for a lot of people of the abilities of these guys. I’ll be forever indebted to the match that they had and for the professionalism they had and the risks they took. Basically, you got Bubba and Devon the catchers, then you got some flyers that need to be caught. I thought Jeff Hardy was amazing in that match especially.”

WrestleMania X7 closed with Stone Cold turning heel to defeat The Rock with the help of Vince McMahon. At the time, Austin was the hottest babyface in the company, but was petitioning backstage to turn heel. JR said that move backed WWE into a corner, but the amount of success they had on the night overshadowed the bad decision they made by turning Austin into a bad guy.

“We booked ourselves into a corner that was hard to navigate out of,” Ross said. “It’s so important how all these things came about, the TLC match set a precedent, it created a new match and created a new pay-per-view. Angle and Benoit, I loved that match, I thought it was great. But, the key thing about this show was the turn for Steve and how it affected the rest of the roster and I think it served to be a bit confusing.

“Why is he the bad guy now? I think most of them felt that way, but it will still always be in my top three [pay per views of all time], maybe number one. I really enjoyed working with Heyman, Heyman had one of his better nights and I thought we meshed well. Heyman was the perfect guy to have out there cause he could sing the praises of the new heel Austin. That helped Steve’s case. I’d say it was a top 3 all time pay-per-views, and maybe number one. I’d be hard pressed as I sit here right now to tell you that I called one that I liked better.”