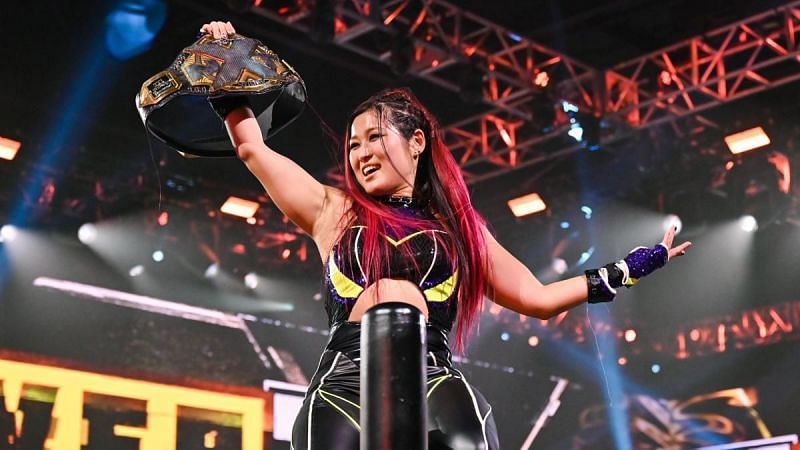 Speaking on the post-show media call, Triple H detailed why they made the decision for Raquel Gonzalez to dethrone the Genius of the Sky.

“I’ve said it a lot in these calls, I’ve said it a lot in press, and not because I’m trying to hype the brand but because I truly believe it: I believe Io Shirai is the best female performer on the face of the planet,” Triple H said. “I truly believe that. I can’t say enough good stuff about her. She’s had a monumental reign. Why Raquel Gonzalez? Right woman, right time. She’s got a presence. When you see her, it’s hard not to think that she’s a star. It’s interesting that that’s all been within the last year, year and a half. You look at the transition of her debuting with Dakota Kai to where she is now, from stature to look to physique to just everything, she has capitalized on every second of every moment. Transformed herself into an absolute star. I think she’s just nicking the surface. Why her? She put herself in the position for it to be her.”

Also present on the call was WWE Hall of Famer and NXT coach Shawn Michaels, who emphasized he’s been impressed with Gonzalez for a long time.

“I just have to say that it was two and a half years ago that I just happened to stroll into a show in St. Petersburg, and there was these two unbelievably beautiful, tall, strong women in all black,” Michaels said. “It was Raquel Gonzalez and Rhea Ripley standing there together. I remember just standing there and looking at them and thinking, ‘Oh my goodness. Those two are going to be stars.’ And it’s happened. Watching Rhea Ripley, homegrown, I mean she is NXT through and through. I’ve had the opportunity to watch her grow into an incredible performer. And the work ethic of Raquel Gonzalez is unparalleled. From a personal standpoint to watch her journey has been one of the most impressive, and honestly feel good stories. You love to watch people that work that hard get recognized for that. Io Shirai for me, it’s simple: she’s money. Guaranteed, every time that Io Shirai, you can bank on her night after night, Takeover after Takeover, live show after live show, she is money all the time. She has earned the right to be called the best in the world.”

While a main roster call-up after a title loss used to be tradition for NXT superstars, recently unseated champions have elected to stay on the yellow brand. Former world titleholders like Adam Cole, Tomasso Ciampa, and Johnny Gargano have all stayed in NXT after their big title losses, but every former NXT Women’s Champion has made their way to the main roster. The only former Women’s Champion that had an extended NXT stay after losing her title was Rhea Ripley, who recently departed Wednesday nights for Monday Night RAW.

With Shirai’s future plans currently uncertain, Triple H made clear that where she goes next is completely up to the former NXT Women’s Champion.

“Io Shirai has earned the right to do what she wants to do,” Triple H said. “To me, if Io Shirai wants to take time off, she takes time off. If she wants to come back and go after Raquel Gonzalez, she’s earned that right. If she wants to do something else for a bit, or any of that, she’s earned the right to do all of it. It’s an interesting thing here where whenever somebody loses in NXT, they’re so dominant, they’re so big, they’re so whatever. They have this incredible run. Then, all of a sudden, there’s a bump in the road. They lose a match. Then everybody goes, ‘Clearly they’re going someplace else.’ Why is that? It’s just a funny thing, because anybody in the world loses someplace else, nobody goes, ‘Oh, they’re going someplace else.’ There’s always more to do. There’s always more to proving you’re the best. There’s the next challenge. The next competitor. There’s the next all of those things. For me, it’s whatever Io wants to do, but I don’t see that as she lost one match over the past three hundred something days she’s been champion, all of a sudden she’s just moving on.”

It remains to be seen what Shirai does next, but the Heartbreak Kid seems to think the Genius of the Sky has an easy decision to make.

“No one disputes it, right?” Michaels said. “The deepest, best women’s division in all the world, right here in NXT. Why in heaven’s name would you go anywhere else? Stay here and face the best.”

If you use any of the quotes in this article, please credit Wrestling Inc. for the transcription.