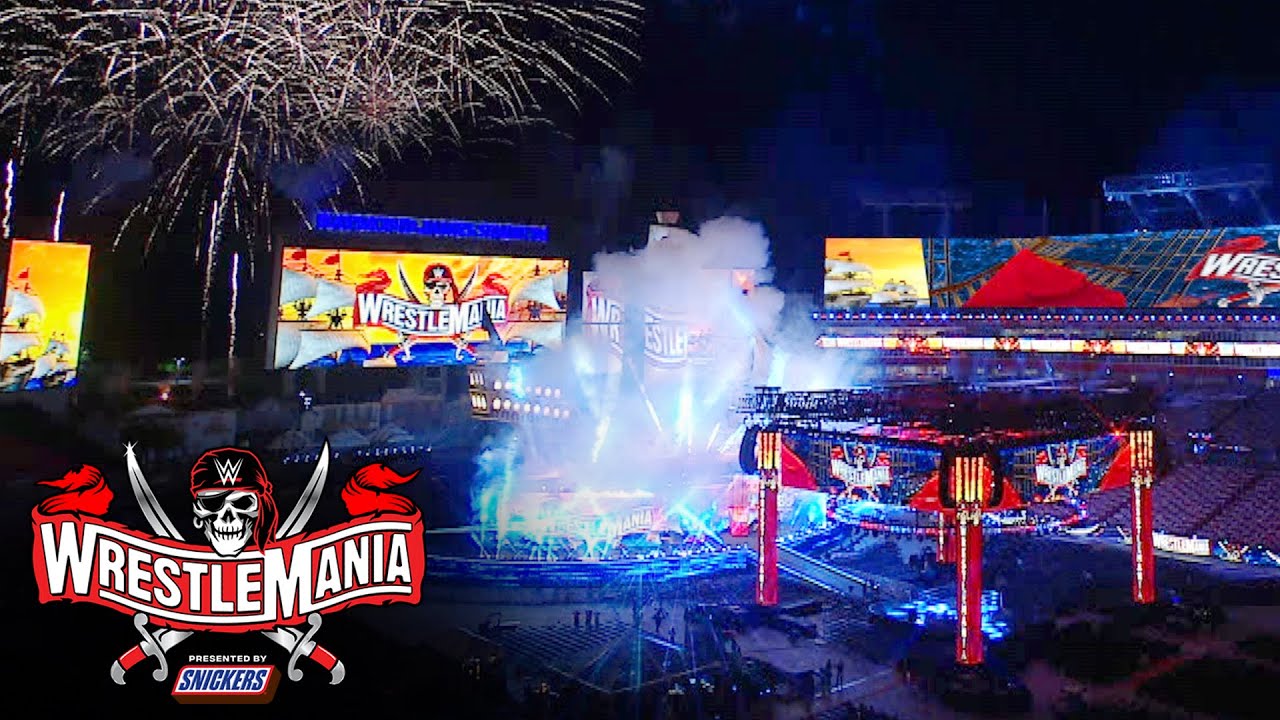 WrestleMania 37 Night 1 will be the first WWE event in front of a live paid attending crowd in over a year. The show will begin at 8pm ET on Saturday April 10th (with no scheduled Kickoff matches as of publishing time) and will be broadcast live exclusively on Peacock. WWE is said to be debating how the company will commemorate the return of live crowds to WWE. WrestleMania will take place at Raymond James Stadium in Tampa, Florida – the original site for WrestleMania 36. Raymond James Stadium successfully hosted 27,000 plus for this year’s Super Bowl while managing to prevent a COVID super spreader event. The experience of the staff and expanding availability of vaccines in the United States give fans much needed peace of mind, allowing a full release into the joy of WrestleMania.

There are seven matches scheduled for night one, featuring Superstars from RAW & SmackDown. Bebe Rexha will perform WWE’s traditional presentation of “America The Beautiful”. WWE fans will remember Rexha from her performance of “Home” with Machine Gun Kelly & Sam Harris at the 2017 “Tribute To The Troops”. The theme songs for this year’s WrestleMania are “Save Your Tears” by The Weeknd & “Head Up High” by Fitz from Fitz & The Tantrums.

Becky Lynch’s recent Elle Magazine article, Nick Khan’s interview, and Lynch’s most recent Instagram post caption hint heavily towards The Man making her return on Night 1 of WrestleMania. Bayley isn’t booked for WrestleMania but she could give Lynch a hot heel and fresh opponent to feud with in her return. The Wrestling Observer Newsletter has reported that a segment involving the two has been discussed. The Observer has also reported rumors of Lynch using her customized semi-truck to make an extra special entrance. If not, hopefully she steals Rusev’s tank from the WWE vault.

Below is a preview of the card and predictions based upon recent booking. In the comments below, share which matches you’re most excited for and how much you love Cesaro. Happy WrestleMania, everyone.

Shelton Benjamin and Cedric Alexander are banned from ringside.

Bobby Lashley, MVP, & The Hurt Business were the best element of RAW for the past year and they were inexplicably broken up two weeks before WrestleMania. Their breakup negates the stipulation that seemed to be a big deal: Shelton Benjamin & Cedric Alexander are banned from ringside. The only thing that makes sense is that WWE feared the fans cheering Lashley at WrestleMania and so they turned up Lashley’s hubris to make him less likable.

Drew McIntyre was a workhorse for WWE throughout the pandemic. He delivered excellent matches with each opponent and has found a swagger that has eluded babyface champions in recent years. McIntyre’s humility, work ethic, & real-life story make him the most relatable 6’5” babyface champion in decades. It’s hard to be a hero in 2021, but McIntyre has been making it work while others have failed when given the opportunity.

The story of this match will be centered around Lashley’s hubris being overcome by McIntyre’s determination. These two have produced physical matches in the past for TNA & WWE but McIntyre’s recent run of matches against Sheamus indicate that he’ll be looking to be even more physical with Lashley in this meeting. Lashley’s future is uncertain after this match. There will likely be some roster moves after WrestleMania and hopefully WWE doesn’t forget the fantastic work The Hurt Business did over the past year. McIntyre and Lashley could be linked after WrestleMania until WWE builds another monster heel for McIntyre to overcome.

Braun Strowman will be coming off a program with Shane McMahon, likely making him the next #1 contender. A repackaged Dominik Dijakovic/T-Bar would also match up well with McIntrye. The former T-Bar was signed to WWE because of his ability to put on amazing matches with big men like Keith Lee on the indies. His match with the late Luke Harper at Worlds Collide was a career highlight that suggests he’d light it up with the 6’5” Scottish Superstar. There is one more monster out there that no babyface has been able to truly overcome and should he be next in line, he will be the biggest test of McIntyre’s mettle as a hero: The Fiend.

This matchup is the most anticipated women’s match in a year and it’s getting the main event slot for the night. Banks carried WWE programming during COVID with Bayley and her star rose to new heights after her debut as a recurring character on The Mandalorian. Bianca Belair debuted on the RAW after Mania last year and has thrived. Belair continues to look more and more comfortable in the ring, on the mic, and in public appearances. Although Banks is the veteran in the ring, the 29 year-old & Belair have potential to main event multiple WrestleManias together with plenty of years ahead in their careers.

The booking around this match has been nonsense and as of the last SmackDown, it feels like WWE has shaken off the nonsense. Belair earned her title shot by winning the Royal Rumble after 56 minutes of combat. Banks kicked the Women’s Revolution into overdrive with her NXT Takeover: Brooklyn match against Bayley in 2015. Six years later, Banks is main eventing WrestleMania. Banks will let her heelish side show in this match. The Boss’s penchant for joint manipulation and finger stomping will make Belair’s eventual comeback all the more fiery. WWE sees a lot in Bianca Belair and she is going to shine bright as the winner of the main event of the first night of WrestleMania 37.

The New Day (c) vs. AJ Styles and Omos

Omos will make his televised in-ring debut at WrestleMania. The size and power that Omos brings to WWE is so special that creative paired him with one of the greatest wrestlers of all time: AJ Styles. The New Day won the RAW tag team titles from The Hurt Business on March 15th and will certainly ensure a debut match that is even smoother than Triple H & Stephanie vs. Ronda Rousey & Kurt Angle. Although the results of many of these matches are predictable, that doesn’t mean that they’re going to be boring. Expect to enjoy three future Hall Of Famers working to make Omos’ debut noteworthy. The rivalry between Woods, Kingston, & Styles on UpUpDownDown will also likely add some fun to this matchup as well.

Shane McMahon has returned to WWE programming to work with Braun Strowman. McMahon is known for his death-defying stunts at WrestleMania and he’ll get his opportunity to impress once again in a cage match against the 386lb former Universal Champion. McMahon has continually taunted Strowman by calling him stupid in various ways in some incredibly hard-to-watch segments on RAW. McMahon even poured green slime on Strowman to humiliate the 6’8” Superstar further after an attack on RAW.

As awful as the build to this match has been, recent Shane McMahon WrestleMania opponents have all been guys WWE considers top guys in line for championship opportunities: AJ Styles, Kevin Owens, and The Miz. Although Strowman will finally get his hands on Shane McMahon, the prospect of a big Shane McMahon stunt combined with McMahon’s taunting of Strowman’s intelligence suggests McMahon could pull off a win using his cunning. McMahon will win this match by having Strowman throw him over the top of the cage to the floor. This will allow Strowman to get his revenge while leaving things open with Shane holding on to the technicality of his victory over Braun in the future. Of course, Braun could always win because he’s a giant and Shane is in his 50s.

Shane McMahon via escaping the cage

Lana and Naomi vs. Tamina Snuka and Natalya vs. The Riott Squad vs. Mandy Rose and Dana Brooke vs. Carmella and Billie Kay

Lana & Naomi have traded wins back and forth with Mandy Rose & Dana Brooke. The Riott Squad’s tag team championship dreams were crushed by Asuka & Charlotte back in January and their last match was a loss to Natalya & Tamina. Natalya recently scored a singles win over Shayna Baszler with a roll-up but her chemistry with Tamina is still developing. WWE has not given the thought to the tag division that it deserves. Carmella & Billie Kay have potential for memorable moments that could get more TV time for the Women’s Tag division. WWE loves Carmella and this new pairing with Billie Kay looks like money.

The Miz and John Morrison vs. Damian Priest & Bad Bunny

Bad Bunny has evolved from being known as an “introverted superstar” (Pitchfork) one year ago to cutting a promo live on RAW for his WrestleMania debut against The Miz & John Morrison. Bad Bunny, a lifelong WWE fan, burst onto WWE’s radar with his hit song “Booker T” featuring the Hall of Famer in the music video and subsequent live performances. After connecting with WWE, Bad Bunny moved to Florida to begin training for a match at WrestleMania. His dedication and growth has been lauded by multiple Superstars. Damian Priest has also shined in his role on-camera as Bad Bunny’s friend and tag partner. Morrison & The Miz raised the stakes for the match by defacing Bad Bunny’s $3 million Bugatti on this week’s RAW.

The Miz & Morrison are going to earn their paychecks bumping all over the place for Priest & Bad Bunny in this match. We’ve seen Bad Bunny execute a flying body press at the Royal Rumble, but the personal nature of this feud will skew this match towards a brawling style. Bad Bunny has got to pick up the pin here, but hopefully it will be after Damian Priest hits his finisher to help get his finisher over as well. In the comments, throw in some guesses as to what moves will be in Bad Bunny’s repertoire.

After Rollins took some time off to recover from losing Murphy as his disciple and become a father, Rollins came back to SmackDown having learned very little from his time away. Rollins still fancies himself the savior of SmackDown and when Cesaro didn’t look impressed enough, Rollins attacked him. Cesaro returned the favor by putting Rollins in the Cesaro Swing a couple weeks later. The two picked up wins against one another’s former tag team partners: Murphy & Nakamura to further the feud.

This match could steal the show. Cesaro is a wrestling machine and his chemistry with Rollins is through the roof. Both men are creative in the ring and are good friends outside of the ring. This match will feel more like an old Ring Of Honor match than a WWE match and will be a welcome change of pace and style for the event. There are lots of reasons why Seth Rollins can win this match, but a world where Cesaro gets a singles win at WrestleMania in a great match is the world that we’re going to live in.