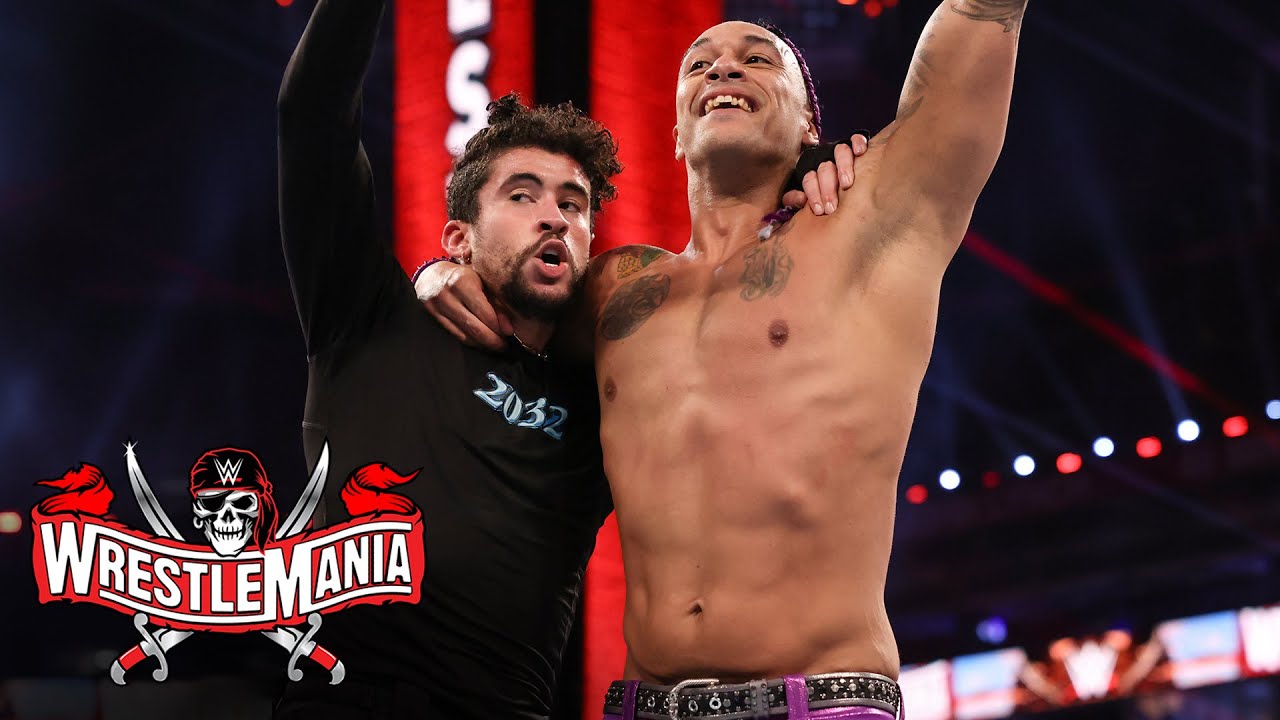 Night two of WrestleMania 37 takes place on Sunday April 11th at 8pm ET at Raymond James Stadium in Tampa, Florida and will be broadcast exclusively on Peacock. WWE rolled with the 30 minute rain delay on night one by having various Superstars cut live promos backstage turning out some very genuine moments in the face of WrestleMania’s first rain delay in history. There is a good chance of rain for night two as well, but WWE will almost certainly improve on a very successful first night.

Becky Lynch truly returned yesterday through trolling the internet into thinking she’ll show up at WrestleMania. We hope to see her soon. Until then, there are seven matches scheduled for tonight with Wale performing Big E’s theme during his entrance, Logan Paul is scheduled to appear with Sami Zayn, Ash Costello will play Rhea Ripley to the ring for her entrance, and Ashland Craft will perform WWE’s traditional presentation of “America The Beautiful” to open the event.

Below is a preview of the card and predictions based upon recent booking. In the comments below: share your predictions, which matches you’re most excited for, and what you liked from night one. Happy WrestleMania, everyone.

Roman Reigns main events WrestleMania for the fifth time against Edge and Daniel Bryan main eventing WrestleMania for the second time in their careers. Edge, Bryan, and Reigns have all faced the possibility of their careers being taken away from them by a medical condition but all three overcame their obstacles to get back to the main event of WrestleMania. At first, it seemed that Edge was destined for this match after his spectacular comeback in the 2020 Royal Rumble and subsequent feud with Randy Orton followed by his victory in the 2021 Royal Rumble. Daniel Bryan won the Elimination Chamber match and earned a shot at Roman Reigns’ Universal Championship. When Bryan finally got a fair shot at Reigns’ title, Edge interfered in the match. This led to Adam Pearce declaring that Daniel Bryan will be added to the Universal Title Match at WrestleMania.

WWE isn’t quite sure how the fans will react to Roman Reigns and Edge, so they turned Daniel Bryan into a complete white hat babyface so that Edge can dust off his “ultimate opportunist” persona and Roman can establish his heelish Tribal Chief persona in front of a live crowd. It feels like there was a time where Vince wanted Edge to win this match, but WWE is portraying Edge differently than they did during the build to the Royal Rumble. The Ultimate Opportunist will get so close to winning but the Tribal Chief will end up victorious, pinning Daniel Bryan at the end of the night. Each man will bring it in this match and hopefully everyone will walk away saying that this was Roman’s crowning moment that he should’ve gotten over Goldberg last year. The next feud for all three of these men is unclear, but Seth Rollins, Jey Uso, & Cesaro are all pieces that could slide into feuds with all three Superstars in this match should they move on from one another.

There is a WrestleMania trend that when a Superstar gets a band to play their entrance theme, they lose the match. Wale will perform Big E’s entrance for this match but Apollo Crews will have a Nigerian drum circle to support him in this match. In kayfabe, these musical elements will cross one another out. We have never seen a Nigerian Drum Match before, but one can assume that someone high up in WWE creative finally watched Black Panther like the rest of us and loved it.

E & Apollo will have an opportunity to put on the best Intercontinental Championship match at WrestleMania in years with this type of pageantry around the bout. These two men can wrestle and hopefully the drums don’t distract too much from their work. Big E’s promo on SmackDown continued to flesh out more parts of his personality by showing his high school & collegiate accomplishments in Florida. A big win here for E in his home state will go a long way in building towards the future of WWE.

Asuka has held the RAW Women’s title for a majority of the COVID era. Unfortunately during that time, the main roster women’s matches have become less frequent and had their TV time greatly reduced. The RAW Women’s Championship has nowhere near the importance it did when it was the prize of the main event of WrestleMania 35.

Rhea Ripley returns to WrestleMania one year after her NXT Championship loss to Charlotte Flair. Ripley finished her time in NXT against newly crowned NXT Women’s Champion, Raquel Gonzalez back in January. After appearing in the 2021 Royal Rumble, Ripley remained on the sidelines until Charlotte Flair disappeared from TV. Lucky for everyone involved, Ripley has the ability to tear it up with The Empress of Tomorrow.

Ripley and Asuka were paired together as a tag team, mirroring the booking of Belair & Banks, in an attempt to inject a personal element to the feud. The reality of this feud is much more interesting than any fiction creative could hang on it: Ripley and Asuka both have something to prove at WrestleMania and both are excellent in-ring performers. Ripley’s style favors more power moves than Asuka, but Asuka’s strikes are some of the most feared in women’s wrestling. This match really could go either way, but Ripley will bring an injection of new energy into a sagging women’s division. Hopefully she and Asuka continue to feud until Ronda Rousey, Charlotte Flair, Ronda Rousey, & Becky Lynch return and shake the division up.

Sheamus has been reenergized through his feud with Drew McIntyre this past month. The two friends beat the hell out of one another to further establish the toughness of McIntyre and remind the audience of the kind of intensity Sheamus brings to singles matches. On the main roster, Riddle has been depicted mostly as a comedic character. Sheamus will bring out the serious side in Riddle and give the WWE audience a preview of how violent and how serious Riddle can be. Sheamus has two pinfall victories over Riddle while Riddle only has one pinfall victory (and a DQ victory) over the Celtic Warrior. Sheamus seems to be on a path to get one more shot at the WWE Championship down the line and the United States Championship seems like it fits Riddle well for now. A win over Sheamus gives current Superstars credibility in the brawling department. This will help develop Riddle’s persona as WWE looks to build the former UFC star as a future top guy in the company.

Natalya & Tamina emerged victorious from yesterday’s Tag Team Turmoil match. Both picked up recent singles victories over Shayna & Nia, respectively. Natalya & Tamina both are powerful in their own right, but the power of Jax & Baszler is truly special. This match will be a far cry from the Divas style and will further highlight that women’s matches can be just as varied in style as men’s matches.

Baszler & Jax have had moments of disagreement in the past, but both will be extra motivated to defeat Natalya & Tamina after losing to them in singles competition. There’s no need for Jax & Baszler to lose the titles anytime soon. Jax & Baszler will retain as they showcase the power moves of the women’s division.

Logan Paul will be Sami’s guest.

Sami’s obsession with his theory that WWE is conspiring against him has alienated him from his only friend, Kevin Owens. This feud started about a month ago, but closely mirrors the experience of so many Americans who have seen friends and family get wrapped up in conspiracy theories over the past year. Only none of our friends and family have brought in Logan & Jake Paul to help prove their point.

Sami Zayn started in WWE as the ultimate babyface, so seeing him thrive as a heel this past year has been a delightful surprise. Owens hasn’t had a bad match since he feuded with Shane McMahon in 2019. WWE has their guys but Owens has continued to force himself on to card after card and deliver every single time. Although we’ve seen these two wrestle one another many times, we have never seen it with Kevin Owens as a face and Sami Zayn as a heel. Enjoy the new wrinkles and how the two turn their old feuds upside down. Owens is due for a big win and his (former) best friend is gonna give it to him tonight at WrestleMania.

Five years after Wyatt and Orton first faced each other on TV at Backlash 2016, their story brings them to WrestleMania 37. Wyatt recruited Orton to the Wyatt family, leading to the two winning the SmackDown Tag Team Championships. In an act of defiance, Orton burned the Wyatt family home to the ground and defeated Wyatt for the WWE Championship at WrestleMania 33. Wyatt got revenge on Orton in the “House Of Horrors” match but Orton took the feud to another level in 2020 when he burned Wyatt (as The Fiend) alive in their Firefly Inferno Match at TLC.

The Fiend is hell-bent on vengeance and with the help of Alexa Bliss, he will get his WrestleMania revenge on Randy Orton. The matches between these two involve a lot of spectacle. Wyatt is one of the most creative minds in the business and when he is used well, he can move stadiums. Orton wants to help Wyatt get back to that position. Hopefully whatever technical spectacle WWE has planned for this match helps out The Fiend, who has been maligned by inconsistent booking and odd technical choices. It’s unclear who The Fiend could feud with next, but Wyatt has too much potential to sit on the shelf.

The Fiend via pinfall