As noted earlier, Cena issued a video apology to fans in China after he referred to Taiwan as its own country while doing media for the Fast & Furious 9 movie. The comment brought major backlash from fans in China, including some who weren’t satisfied with Cena’s apology as they want him to state that Taiwan is a part of China. You can click here to see Cena’s video apology.

Punk changed his Twitter bio today and wrote, “Taiwan is a country.”

That’s it, there is no other text in the bio. He brought attention to the bio change by making a tweet to let everyone know.

Fans in mainland China were outraged at Cena’s comments as Beijing insists that the self-ruled Taiwan is an indispensable part of the country, not on its own. Universal Pictures previously chose Taiwan for its global premiere of the Fast 9 movie. The movie was released a few days later in mainland China. The movie was directed by Taiwanese-American director Justin Lin.

You can see Punk’s tweet below, along with a screenshot of his bio: 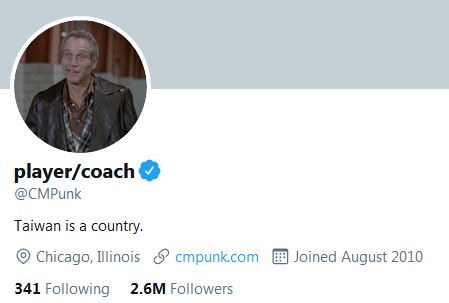