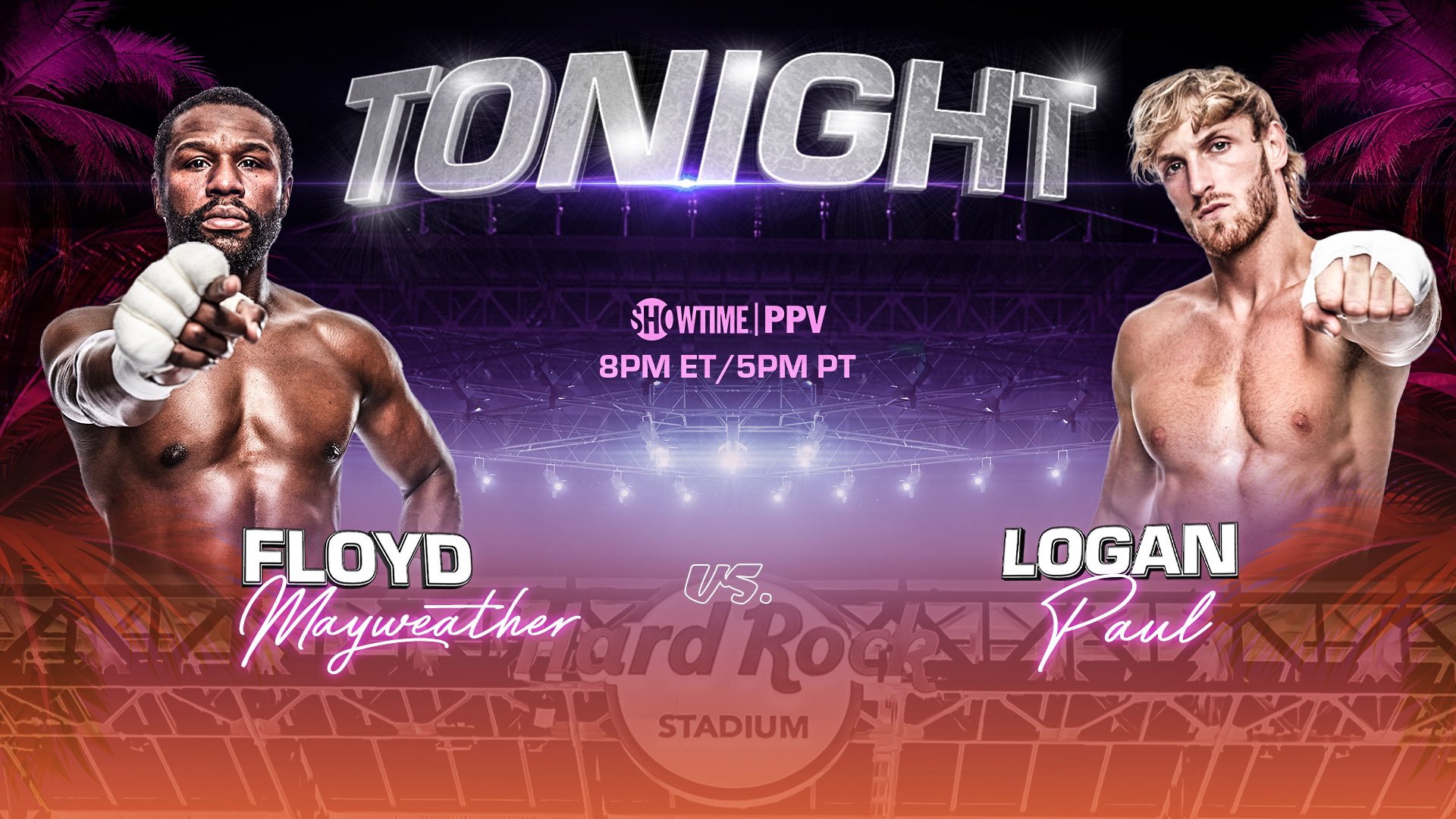 Welcome to Wrestling Inc.’s live coverage of Bragging Rights: Floyd Mayweather vs. Logan Paul! The event is scheduled to begin at 8pm ET, with the main event expected to begin around 10pm ET. Click the refresh button on your browser every few minutes to keep up with the live results. Let us know your thoughts on the show by sharing them below in the comments section below!

Including the main event, four boxing matches are scheduled to take place. Badou Jack and Dervin Colina will compete in a light heavyweight bout, while Jarrett Hurd will face Luis Arias in a junior middleweight contest. Also on the card is former NFL star Chad Johnson (fka Chad Ochocinco) making his boxing debut against Brian Maxwell in a four-round exhibition.

As announced earlier this week, Mayweather and Paul’s bout will also be an exhibition, scheduled for eight rounds with no on-site judges and consequentially, no winner announced. In essence, if either man is to claim victory, he will have to knock the other out.

The first match will begin shortly.

The first round sees Johnson and Maxwell trade strike attempts but fail to land many. The two lock up a couple of times which stall most of rounds one and two’s duration.

The fourth round is much of the same for the first minute, but Maxwell lands a clean strike to Johnson’s face that knocks him to the ground. Johnson gets back to his feet while the referee checks on him for 15-20 seconds. The match resumes, but Johnson is unable to get any shots in before the round concludes.

In the post-match analysis, it was revealed Johnson landed 4 of his 10 jabs compared to Maxwell, who failed to land any of his 16 jabs. In total, Johnson landed 14 of his 45 shots while Maxwell landed 17 of his 68.

This exhibition has no official winner, but Johnson congratulated Maxwell for his knockdown. Former WWE commentator Mauro Ranallo is running post-match interviews.

The next match is Jarrett Hurd vs. Luke Arias in a junior middleweight bout.

The two trade jabs and strikes throughout round one, with neither man having the clear upper hand. Roughly 30 seconds into round two, weather forces the match to pause. Rain begins blowing into the ring, which leads crew to enter and wipe down the canvas with towels. Fans leave their seats briefly as the rain persists, but return once the round resumes.

Once the round resumes, it is all Hurd. He takes control with body shots and combos it with a strike to the face, which busts Arias open. Arias begins bleeding significantly, to the point where it is dripping on his trunks. Arias is able to get one good shot in before the round ends that stuns Hurd. He stays on his feet, but staggers a bit.

As the rounds progress there is a clear divide in control. Arias has taken a ton of damage and is showing signs of fatigue, yet still lands a ton of shots. Hurd is struggling to defend his head, but remains in control. Arias’s has reopened almost every subsequent round. The referee calls a stoppage on his time. He converses with both before deciding to resume the fight. Round nine begins with Arias falling briefly, to which the referee says is because of the rain. Crew wipe down the canvas and the round resumes. Hurd immediately knocks down Arias, but the referee does not call the match yet.

The two touch gloves to open the tenth and final round. Hurd plays defensive for a significant portion but lands the occasional strike. Arias dominates the offensive side, throwing numerous punches and body shots but only lands a few.

This match will now go to judges’ decision.

Arias is declared the winner after two of the three judges score in favor of him. In the post-match interview, Arias gives props to Hurd, saying his knockdowns were legitimate except the last one. Arias says people used to tell him to quit boxing and get a real job, but he’s here now. He says never give up on yourself. Hurd notes that the canvas being slippery did throw him off.

The next match is Badou Jack taking on Dervin Colina in a light heavyweight contest.

Jack comes out of the gate swinging, and immediately pressures Colina to the corner. Colina continues to play defensive throughout rounds one and two. Round three sees more of the same, but Colina gets a warning from the referee. Colina had not been abiding by the referee’s rules, as he has been hugging too often.

Round four is all Badou Jack. He knocks down Colina twice in the round, and while Colina is able to get to his feet both times, he gets send to the floor by a brutal body shot as the round concludes. This is Jack’s third knockdown of the round, which effectively ends the fight.

After the match, Mauro Ranallo talks with Badou Jack about his future plans. Jack thanks God for everything. He admits the bout was a little sloppy, but he is happy with a victory.

The next match is your main event: Logan Paul vs. Floyd Mayweather.

It’s happening 👀🍿@LoganPaul on his way to the ring for the main event! #MayweatherPaul pic.twitter.com/EP7LG4yod7

Lots of missed strikes from Paul early due to Mayweather’s impressive elusiveness. Paul is able to get a flurry of strikes towards the end of the first round, but all come to Mayweather’s protected head. Round two is much of the same, but Paul is beginning to show some fatigue.

Round three open with Paul dripping sweat. He reduces to hugs multiple times and tries for body shots, but they don’t do much. Mayweather attempts a knockout blow that just barely misses Paul. They hug once again, but this time it’s Mayweather with the body shots. Once they’re separated Floyd lands a clean left hook to Logan’s face. Paul is able to escape the rest of the round, but is showing the effects of the shot.

Mayweather opens the fourth round on the offensive attack. Paul is playing defense big time, but is able to tag Mayweather in the back of the head. They wrap up multiple more times, but every time they are separated, Mayweather steals the last laugh with a jab to Paul’s face. Some land hard, others just graze.

Mayweather controls all of round six. Paul is purely focused on surviving. He constantly tries to lock up to get a breather, but Mayweather always leaves each hug by tagging Paul, whether it be a light strike or a brutal body shot. Round seven is similar as well, but this time Mayweather begins peppering in some trash talk. Paul starts throwing Hail Mary’s, but is never able to land any.

We now enter the eighth and final round. More of the same from both Mayweather and Paul. Mayweather begins trying to put Paul away, while Paul is just trying to survive. Paul lands one body shot and wraps Mayweather up. The referee separates the two, and Paul begins laughing. They lock up once again in the corner, both showing smiles. As the clock winds down, both start throwing haymakers. Paul raises his fist to the crowd in the final seconds. Before the bell, both attempt a final knockout blow, but both miss.

As noted beforehand, this match is an exhibition and will not have a winner.

The post-match interviews begin with Floyd Mayweather. Mayweather gives credit to Paul, saying he’s much better than he anticipated. He said that even without much experience, Paul “knows how to use his weight” and was impressed. He notes that he’s not 21 anymore, but he still had fun.

Logan Paul opens his interview by saying nothing is impossible. He says he went toe-to-toe with the greatest boxer of this generation and survived. He says it’s an honor to grace the ring with Mayweather. As for his future, he says he wants to get a little better before thinking about another fight. Paul does tease “Logan Paul vs. Floyd Mayweather II,” but leaves it as a “we’ll see.”

That concludes our coverage of tonight’s pay-per-view. What did you think of the event? Let us know in the comments below!

Previous
Roman Reigns Vs. Rey Mysterio Reportedly Set For WWE Hell In The Cell
Next
The NWA Signs Kylie Rae