CM Punk’s loss to Mike Jackson at UFC 225 has been overturned to a no contest, according to a report on MMA Junkie.

The report noted that Jackson was stripped off a win after he tested positive for marijuana on fight night. However, the change in result to the June 2018 fight wasn’t reported publicly until now.

Jackson tested positive for “tetrahydrocannabinol due to marijuana,” according to a commission disciplinary document. Jackson’s discipline was finalized in Oct. 2018 with all parties’ signatures.

As a result, Punk’s professional MMA record now reads 0-1-0 (1 NC), according to UFC Stats. When MMA Junkie’s Instagram post brought up this point, Jackson brushed it off and said the website’s opinion was irrelevant.

Neither Jackson nor Punk has competed inside the octagon since UFC 225. While Jackson was briefly linked to fight with Dean Barry in early 2021, Punk has switched over to the role of announcer for Cage Fury Fighting Championships, which streams on UFC Fight Pass. 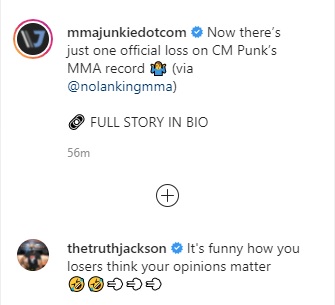