Jeff Jarrett Discusses How An NFL Team Helped Save TNA 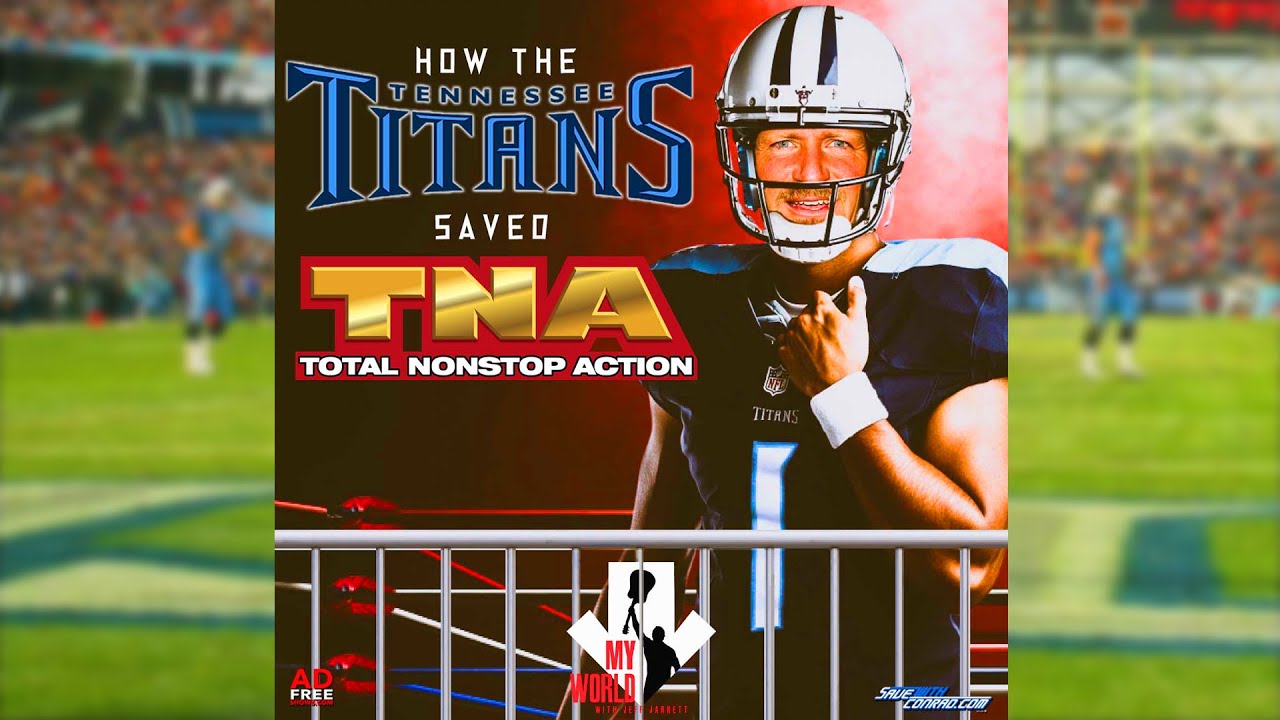 On a recent episode of the My World Podcast, Jeff Jarrett went in-depth on the time the NFL’s Tennessee Titans appeared on an early edition of TNA Wrestling and how that ultimately may have saved the company. The founder of TNA Wrestling came up with the idea for the company after recognizing a void in the marketplace for wrestling fans and detailed the early plans for the company on a previous podcast.

Just following their loss in the 1999 Super Bowl to the St.Louis Rams and missing making the Super Bowl in following seasons, the Tennessee Titans appeared on TNA Wrestling and were ripped apart by Jeff Jarrett for their failures. Players from the team jumped the guardrail and attacked Jarrett brutally, leading to some members of the locker room getting involved and also getting beat down by the NFL players.

Jarrett discussed growing up a Titans fan and how he always had connections with Frank Wycheck, who was the color commentator for the team. He said he always supported the Titans and even wore the team’s shirt during an infamous WCW show.

The clip of the NFL players beating down the wrestlers was shown on numerous talk shows and Sportscenter which gave TNA, a startup wrestling company, some mainstream publicity it needed to become a success. Jarrett explained why he was so happy about the interaction that TNA had with the Titans at the time and how it gave them mainstream press.

“The Tennessee Titans, obviously a national franchise and in the NFL, we had a clip of their players getting involved with our whole roster,” Jarrett said. “It’s out of season for the NFL so they don’t have highlights to play, this is a clip that will immediately be service to every NFL beat writer and talk show host and Sportscenter host. Not because it was such a great clip, although it really is a great clip, it’s because it was out of season and in talk there’s only so much you can show with an out route in preseason. This was some action you could talk over. It was immediately newsworthy and Dixie [Carter] was the PR agent.”

Jarrett described how the interaction with the Titans ultimately got him the financial assistance he needed to make TNA the real deal. Dixie Carter, who was just the PR Agent for the company at the time, ultimately asked Jarrett if she and her family could help the company in any way, which led to Jarrett and her having a meeting with the Carters.

“You talk about faith or divine intervention or luck, just all of that,” Jarrett said. “I was upfront about it and said ‘We lost our funding,’ but I immediately started turning over rocks from financials and I had that conversation with Dixie and Dixie said ‘Do you have any financial materials,’ and I said ‘In fact, we’re in the process of putting that together.’ She said ‘If you can get those to me, I think I might be able to help out.’ I had no idea who Panda [Energy] was, who Bob Carter was. Dixie Carter and Andy Barton ran Trifecta Entertainment and they were the PR agent for TNA Entertainment, that was the relationship.

“I said ‘Sure, you mind sharing who you think?’ She went into how her father was in the energy business but they’re always looking for outside investments and [Dixie would] like to have [TNA]. ‘I’m going out to the ranch with my parents this weekend. I’m going out there and I’d like to be able to share something.’

“We gave them the pitch and as a part of that pitch was the physical copy of the Tennessian article of the Titans kicking ass,” Jarrett said. “As we go through the meeting and after I spoke and my father spoke, after we generally gave our obviously you open up to the give and take of their attorneys asking questions and Dixie was given context and given her thoughts. It became an open discussion but Bob Carter, being the chairman, sat at the end of the table and he just sat back in his chair and I noticed him reading this [Tennessee Titans] article and flipping through it. Then he would take a break from it, listen in and then when he would say something ‘Tell me a little bit more about this Titans deal.’

“Bob kept referencing this Titans article and he was very enamored by it. Toward the end of the meeting, he got up, took the newspaper, put it under his arm and he got up and left. Next thing you know Bob sticks his head in, calls me out in the hall and the specifics went down with ‘Hey, we really like this, we still have to got to work through some things with the lawyers and all this but you don’t mind if we send you guys back on the private flight?’ I’ll never forget getting on that plane thinking to myself, ‘I’ll be damned, I can’t wait to tell Frank Wycheck this story.’ ”

On a previous episode of the podcast, Jarrett mentioned the comparisons between TNA Wrestling and AEW and how both companies recognized a void in the market for wrestling fans. Continuing his conversation about AEW, Jarrett mentioned how when he was in talks with the Carter family to help finance TNA, he brought up WWE’s success saying he believes Tony Khan did the exact same thing when pitching AEW to his father, Shad Khan.

“Let me ask you, do you think Tony Khan went to Shad and didn’t show WWE as a comparable?” Jarrett asked. “It’s a point of reference to a non-wrestling person, how else do you lay out a financial?

“Even in deep discussions, we used a lot of references 10 to 1. I never went outside the box and said ‘We’re going to be number 1.’ Ever, in my history, I never said, and I always classified it and cashed it with ‘Vince has a 40 year head start.’ They’re first in the space. The comparable being, the different revenue streams. We can have the same revenue streams just subtract four or five zeros, we’re never going to be equal.”

Previous
Photos: Chelsea Green Shows Off Matt Cardona’s Gruesome Injuries From GCW Match
Next
The Simpsons Want The Rock In A Story With Lisa Simpson