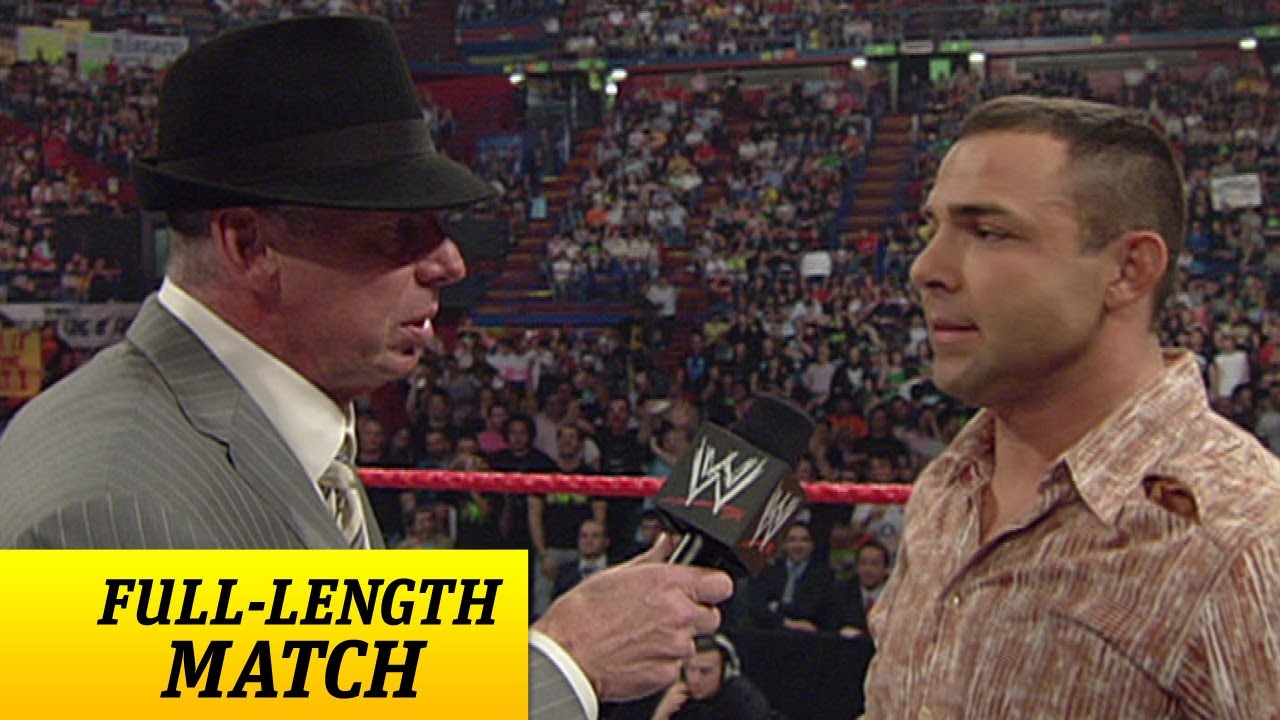 This week on Oral Sessions with Renee Paquette, the very clever and comedic former WWE Superstar Santino Marella came on and talked about his time in WWE and how his call-up came to be. In the first portion of the interview, they talked about how old Marella was when he first joined the company – 33-years-old – and how WWE Hall of Famers like Edge, for example, poked fun at him for his late-aged arrival.

“When I debuted, I was 33-years-old,” Santino Marella noted about his RAW debut in Milan, Italy. “I remember I was in the locker room, and Edge was there. He’s my age, right. He’s 33.

Next, they talked about how his venture over to WWE began. For Marella, it all started when he joined WWE’s developmental company, at the time, Ohio Valley Wrestling [OVW], from 2005 – 2007. After spending two years there, his golden opportunity arose when Paul Heyman approached him one day during their daily training sessions. It was then that Heyman kept a solid eye on Marella, who would then go on and make his Monday Night RAW debut shortly after Heyman’s visit.

“Paul Heyman one day was watching our class practice from up in the bleachers, like The Phantom of the Oprea. He was watching me, and you know, I was doing really well, and I was grasping everything,” Marella began. “He was like ‘Boris, [his character’s name at the time] get in the ring and do five defensive pins.’ So, I go to the ring. I was the kind of guy that like demonstrated to the class what was happening.

“After practice, I was walking to my car, and he goes, ‘Excuse me, Boris, I’m thinking of starting you on OVW TV. I’m like my first break. He was like, ‘We have this idea…’ they knew of my Judo background – my shooter background. When Rip [Rogers] gave me the name Boris, I was like, ‘What, Boris? That’s a horrible name.’ So for two years of my life, in a different city, I was a guy named Boris. People at OVW still call me Boris. That’s how they know me. I had this eureka moment. I go, well, my coach was Don Kolov, and there wasn’t a Boris Kolov, so I asked my coach if I could use the name. He gave me his blessing, so I was Boris Kolov. So then, Paul Heyman was like, ‘I want to change it to Boris Alexiev,’ cause Vince McMahon was always a big fan of the Russian heavyweight, powerlifters – Olympic lifter Vasily Alekseyev. As soon as he told me, I was like, ‘that’s good.’ I was doing something totally different from everyone else, and that’s the name of the game: stand out.

“Arn Anderson would come down and send out the report. I got a good report; I was the only non-contracted guy on OVW television. There were some rumblings that contracts were coming. [I was told], ‘They’re watching you, they’re watching you.’ One day, Danny Davis was practicing, and he goes, ‘Boris, have a good day today.’ I’m like, ‘don’t mess with me, man!’ A week before I came in, I’m like in tears, and I’m like, ‘Danny, tell me, am I doing the right thing, man? I’m away from my child.’ At this particular stretch, I hadn’t gone home in five months. And then, I got the call, and Mike Boche was like, ‘Hey Boris, how’d you like to work for the WWE?’ I [went] home and I knelt down at my daughter, and I’m like, ‘mission accomplished. Boom!’ It was awesome, man!”

Following his two-year run in OVW, it was off to the races as Marella pushed ahead towards his new destiny in WWE. In his interview, Marella recalls all the hoops he had to jump through just to make it to Monday Night RAW on April 16, 2007.

“One day, I was driving up to Elizabethtown, Kentucky for an OVW house show, and I get this call. Vince had this idea for someone to come out of the audience in Italy – cause Raw was in Milan. He’s like, ‘Is there anybody from developmental that’s Italian or from Italian heritage that can speak Italian?’ So, my phone goes off, and Boche asks, ‘Boris, you’re background is Italian, right?’ I go, ‘yeah.’ He goes, ‘Can you speak Italian?’ Marella began on how his Raw debut in Italy came along. “A month earlier, Dusty Rhodes told us, ‘If they [WWE management] ever call you and ask you to do anything, the answer is yes. Then, you better go learn it.’ So, when they asked me if I could speak Italian, I’m like, ‘yes!’

“I had a tourist Italian [tape] set that I used to play non-stop. I regurgitated a couple of lines from the tape, and I was on speakerphone. There were a lot of writers [on the phone]. I said [in Italian] ‘I want to buy a half kilo of cheese.’ I guess it was enough to convince them that it sounded pretty good. They were like, ‘That’s great! We’re going to fly you out tomorrow, to Italy. You might, fingers crossed, debut on Monday Night Raw as this Italian guy.’ I was like, ‘Whoa, what?’ I went to Borders, the bookstore, and bought an eight DVD pack of Italian, and on the entire flight, I was trying to absorb as much as I could.”

Now that the moment was set, Marella recalls how overwhelming yet exciting it was to meet the higher-ups and figure out what his task was for the night. Little did he know that he wasn’t just going to make his debut for the red brand that night, but he was also going to snatch the Intercontinental Championship, a title he vowed to obtain since his training days began in 2002. It seemed like everything was coming together, or so he thought.

“As soon as I walk into the door, the production meeting is coming out, and Arn Anderson comes out of the door, and he has papers, you know, [and he’s like], ‘You’re having a good day, kid. You’re getting the IC strap,’ and walks away. I’m like, ‘what did he just say?’ Marella asked with hesitation in his voice. Then, Johnny Ace was there and said, ‘Hey, Vince wants to talk to ya,’ and I go meet Vince. Then, they brought me out to my seat.

“It was the first segment, or maybe a couple of segments in, anyway his [Vince] music hits and they [the fans] rush the barricade. I’m like, ‘Oh, my God, should I have done that?’ Cause I’m 6-7 people back. I’m like, ‘Oh, my God, he isn’t going to see me.’ And then, once he starts talking, they [the fans] filter back to their seats, and then he introduces Umaga. They [the fans] run again, and I go, ‘oh, God, I missed it again!’ I’m eight people back now; he isn’t going to see me. Security tells them [the fans] to go back to their seats. And then, he issues the Open Challenge. I push myself to the front, and then he saw me. It worked out. We did it!”

Despite his monumental debut, the WWE Universe was not too keen on how Marella waltzed in and won a prominent title without working for it. With the overwhelming criticism from fans, it was up to management and the creative team to repatch and re-establish Marella into a believable character. Unfortunately, his believability did not connect with fans as a face, but rather as a heel.

“So, the WWE Universe was not impressed with being force-fed this fan,” Marella revealed. “All of the sudden, I beat Chris Masters, I rolled up Shelton Benjamin. I’m pulling these victories, and people are like, yeah, right. As if. They [management] tried to say that although he was in the audience, he was training to be a wrestler. People were just like, yeah, no thanks. It was at the pay-per-view that Umaga won back the title, and he gave me the spike that people were like, ‘One more time. Kill him. Finish him.’ I’m like, ‘oh, my God. These blood-thirsty savages want me dead.

“So, then, the conversation was well, turn him heel, and if that doesn’t work, then see you later or repackage him. They turned me heel, and I cut a promo, and it was funny from day one. Me complaining in that accent…Growing up in Toronto, all of my friends were first-generation Canadians. So, I always had that broken English around me my whole entire life. My family even spoke like that. My neighbor, Ivan, [used] to say, ‘Son of a gun.’ So, I’m basically picking up my childhood and incorporating them into the character. I had an endless supply of funny content because I came from a very European, first-generation neighborhood, and I used all of that stuff. People even called me out [by saying], ‘You’re just copying your parents, man.'”

You can listen to Santino Marella’s full interview here. If you use any of the quotes in this article, please credit Oral Sessions w/Renée Paquette with a h/t to Wrestling Inc. for the transcription.