WWE 24/7 Champion Reginald and former WWE Superstar Sin Cara (Jose Jorge Arriaga Rodriguez, aka Cinta de Oro) had a back & forth on Twitter this week.

Reginald received some praise on social media this week over his high-flying entrance into the ring for Monday’s RAW title defense over R-Truth. Sin Cara posted the entrance to Instagram, with one of his own WWE entrances, and took a shot at Reggie.

“Two very cool entrances, let see if he can do it without and acl and wearing a mask with terrible lighting. [angry emoji] Oh.. one more thing, keep doing it for decade on live events and television. All the best. [laughing emoji] #SinCara,” he wrote.

Reginald, a former Circus Harmony and Cirque du Soleil performer, responded in the comments section and said he’s been doing moves like that for 16 years.

“Well seeing that I was doing this is the circus for 16 years before I came to WWE, it should be fine [folded hands emoji],” Reggie wrote, adding, “in the circus, 8-10 shows a week..”

Reginald has not responded to Sin Cara’s last comment as of this writing.

You can see Sin Cara’s Instagram post below, along with screenshots of their comments, and a few shots of Reginald on Monday’s RAW: 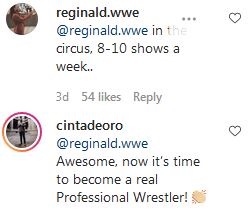