Views From The Turnbuckle: AEW’s Top 10 Moments At Daily’s Place 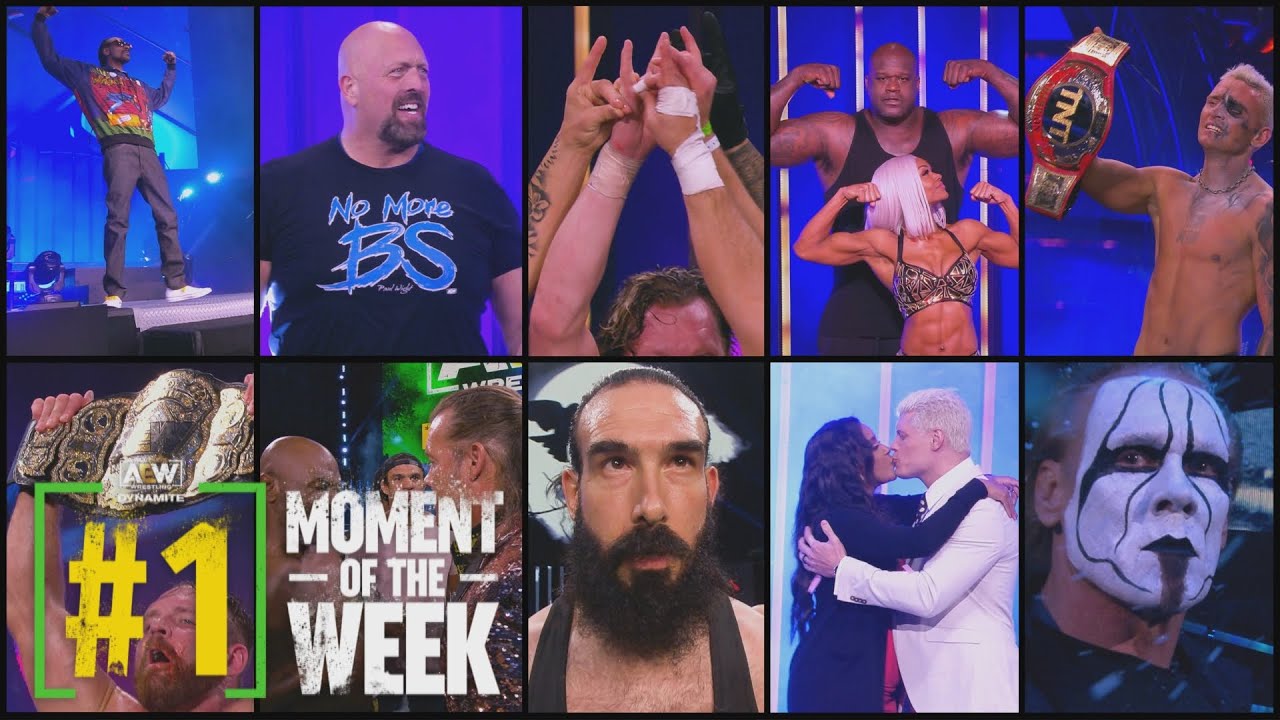 With AEW returning to the road this Wednesday for a live edition of AEW Dynamite in Miami, the company will be at last be putting its time of taping weekly at Daily’s Place in Jacksonville in the rear view.

For AEW, the company has now spent well over half of its existence taping shows at Daily’s Place in front of no (or limited) fans, which would have seemed like an impossible task at the start of the pandemic. While it has certainly not been ideal, the time spent at Daily’s Place included a lot of highlights as the company matured and refined its approach to wrestling. The following is a list of my ten favorite moments from AEW’s time at Daily’s Place.

Fast-forward a few months later and Brodie Lee comes out as “The Exalted One” and the Dark Order quickly changes. Under the leadership of Lee the group was given a focus and a dynamic personality to revolve around. A successful program with Jon Moxley at Double or Nothing 2020, followed by a well-received angle with Cody Rhodes over the TNT Championship, and the group completely reinvented itself into a dangerous group of heels. Even with Lee’s tragic death, the group remains a solid aspect of the company, now as a group of babyfaces rallying around Adam Page as he begins his quest for the AEW World Championship.

The angle to set up Shaquille O’Neal and Jade Cargill making their AEW debuts was not particularly good. The rivalry between Shaq/Jade and Cody was strange and inconsistent and never made much sense. However, it did set up a very memorable match on AEW Dynamite that saw Shaq showcase a pretty high level of skill considering it was his first match; making his limited in-ring time entertaining and even taking a risky table bump outside the ring.

The match also helped showcase Cargill, who is still crafting her identity but is generally assumed to be a future top star in the company. Red Velvet, who stepped in as Cody’s tag partner for the match when Brandi Rhodes got pregnant, also enhanced her value in the match and showed star potential as well. The angle setting up the match (and Shaq’s disappearance afterwards) was not great, but the match itself was a lot of fun and helped get AEW some valuable mainstream publicity.

Winter is Coming was AEW’s attempt to put one of their biggest matches on TV for free. By airing the much-hyped Kenny Omega vs Jon Moxley match for the AEW World Championship, AEW was gambling that a top match could draw a TV number big enough to justify giving away on TV and not on PPV. The show was a success, and at the time it drew the largest crowd to AEW Dynamite at Daily’s Place since the pandemic started, which gave the show some needed atmosphere.

The match itself was good, although perhaps not the best match between the two wrestlers. The key was that it was a title change (only the second time the title had ever changed hands) and it solidified Omega’s heel turn, which launched the strongest angle in AEW over the course of 2021, which ultimately looks to be setting up Adam Page’s triumphant babyface title victory. It was probably the biggest single angle the company has ever shot, and perhaps the most important episode of AEW Dynamite outside of its first episode.

7. Proud and Powerful vs The Best Friends

A simple storyline: A team of heels destroy the van that the babyfaces were borrowing from a team member’s mother. In a quest for revenge, the babyfaces challenged the heels to a parking lot brawl and a blood feud evolved. One of the advantages AEW holds over WWE is the TV-14 rating and the ability to be more violent than WWE, so a bloody, wild brawl can be shown on television and a mid-card feud can produce one of the best matches in company history.

You can never discount “Plunder King” Chuck Taylor, in a weapons match and Taylor, Trent, Orange Cassidy, Santana and Ortiz all busted their asses to put on a crazy, violent match involving guys getting powerbombed through car windshields, back bumps onto trash barrels and other memorable stunts that led Mick Foley to label it one of the best street fights he had ever seen.

6. The Young Bucks vs FTR

A match that had been built long before AEW ever existed, The Young Bucks and FTR finally met at Full Gear in November 2020. After sniping at each other on social media and each taking turns knocking the other through podcasts and video blogs, the two teams had been fighting over the mantle of being the best tag team in the world for years. In a lot of ways this was the most hyped match in company history, and AEW really resisted doing the match during the pandemic era before ultimately deciding they had no choice but to do it.

The match lived up to the hype. It was worked at more of the FTR pace with a lot of selling and slow-builds to set up the hot tags for each team. The finish, with Cash Wheeler arrogantly attempting a 450 Splash and missing, was a tremendous bit of storytelling, as it opened the door for The Young Bucks to win the match, defeat their longtime rivals and win the AEW World Tag Team Championships for the first time.

Similar to the parking lot brawl, this match was used as evidence of AEW’s large capacity for showing violence, with the added wrinkle that it was a women’s match. Easily the most graphic and violent match ever shown in mainstream American wrestling, the match was shocking to a lot of viewers with its use of blood and weapons, and has been of the most memorable matches of 2021.

More importantly, it also cemented the status of AEW’s Women’s Division, one of the most maligned aspects of the company since its inception, the division has improved by leaps and bounds since its debut and the fact that women put on probably the best match the company has had in 2021 is a testament to that development.

As AEW was still grappling with the empty-arena era of wrestling and adjusting to wrestling at Daily’s Place, the company was tasked with producing a PPV, Double or Nothing, which was following up the company’s wildly successful PPV debut the year before. In need to give the fans something memorable, they attempted to create a new spectacle that would take advantage of the unique aspect of holding the show at an empty football stadium.

The result was a bizarre match that had everything from Matt Hardy getting reincarnated to Adam Page riding in on a horse to Chris Jericho assaulting the Jaguars mascot to Nick Jackson doing a Northern Lights suplex chain that lasted 100 yards. Some fans understandably didn’t care for the comedic moments in the match, but business-wise the match was a huge success and has sparked what is likely going to be an annual tradition for the company.

When I first thought about the best moments in AEW over the past year, the first thing that I thought of was the promo exchange on the go-home show before Full Gear between Eddie Kingston and Jon Moxley.

Kingston is easily the biggest winner of the pandemic era in AEW; Kingston went from being a perhaps past-his-prime indie veteran to main eventing Full Gear in a match with Moxley. Kingston’s promos and sense of authenticity allowed him to connect with a live audience that wasn’t actually there, and it was his intensity and chemistry with Moxley in this promo exchange really sold the “I Quit” stipulation and helped solidify Kingston as  top star, even though he went on to lose the match.

2. Sold-Out Crowds Return at Double or Nothing

The triumphant return of sell-out crowds took place at Double or Nothing 2021. While AEW had fans in a limited capacity for months prior, and WrestleMania had a significantly larger audience (in a much larger venue), Double or Nothing was the first sold-out audience for wrestling since the start of the pandemic, and reminded fans what it was like to see wrestling with a great atmosphere.

Double or Nothing was a good show, but didn’t have anything that was really a blow-away match. However, the energy of the crowd and the passion they displayed for the performers was such a novel concept after waiting through the pandemic, the show had no choice but to come across as a huge success and was one of the most enjoyable nights of pro wrestling in recent memory.

A melancholy #1 here, but as tragic as Lee’s death was, the excellent tribute show that AEW produced right after his death was announced was one of the most moving and emotional nights in the history of the industry. The passionate video tributes throughout the show, as well as the tribute matches (culminating with Brodie Lee’s son, -1, cracking MJF in the head with a Kendo stick) were incredible moments that will never be forgotten by the fans who watched it live.

In the latest episode of the Gentlemen’s Wrestling Podcast, Jesse Collings and Jason Ounpraseuth talk about the current wrestling media landscape. They go over the history of wrestling media, public confusion about what being a wrestling reporter actually entails, the awkward state of WWE and AEW media calls, the surge of interest in wrestling news and much more.