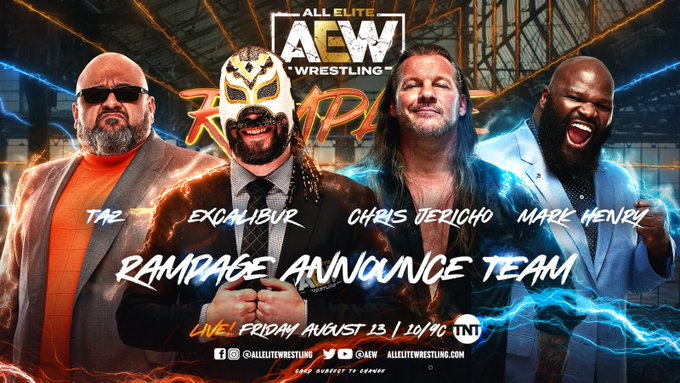 AEW Rampage is set to debut next Friday, August 13, and their broadcast team has been revealed.

Rampage will be called by Taz, Excalibur, Mark Henry, and Chris Jericho. It’s unclear if all four men will be in the booth at once, or if they will rotate throughout the broadcast. Excalibur does has done play-by-play for AEW since the promotion launched in 2019, while Taz and Jericho have made sporadic appearance in the booth before. This will be Mark Henry’s first regular role with the promotion.

The debut edition of Rampage will be headlined by Britt Baker and Red Velvet, as DMD puts her AEW Women’s Title on the line in her home town of Pittsburgh, PA. Red Velvet confronted Baker on Dynamite tonight, making her case for a title shot. Baker obliged, but not before attacking her future opponent.

You can see a clip from the segment below, as well as the broadcast team announcement:

Get tickets for the WORLD PREMIERE of #AEWRampage next Friday night (8/13) in Pittsburgh at the @Petersen_Events Center at https://t.co/UN1cNj1kQq. pic.twitter.com/gkmfiG9GCz

.@Thee_Red_Velvet wants a piece of the #AEW Women's Champion, and @RealBrittBaker wants home-field advatage NEXT FRIDAY in Pittsburgh on the premiere of #AEWRampage!

Tune in to @tntdrama NOW to watch #AEWDynamite Homecoming! pic.twitter.com/123leTluwL