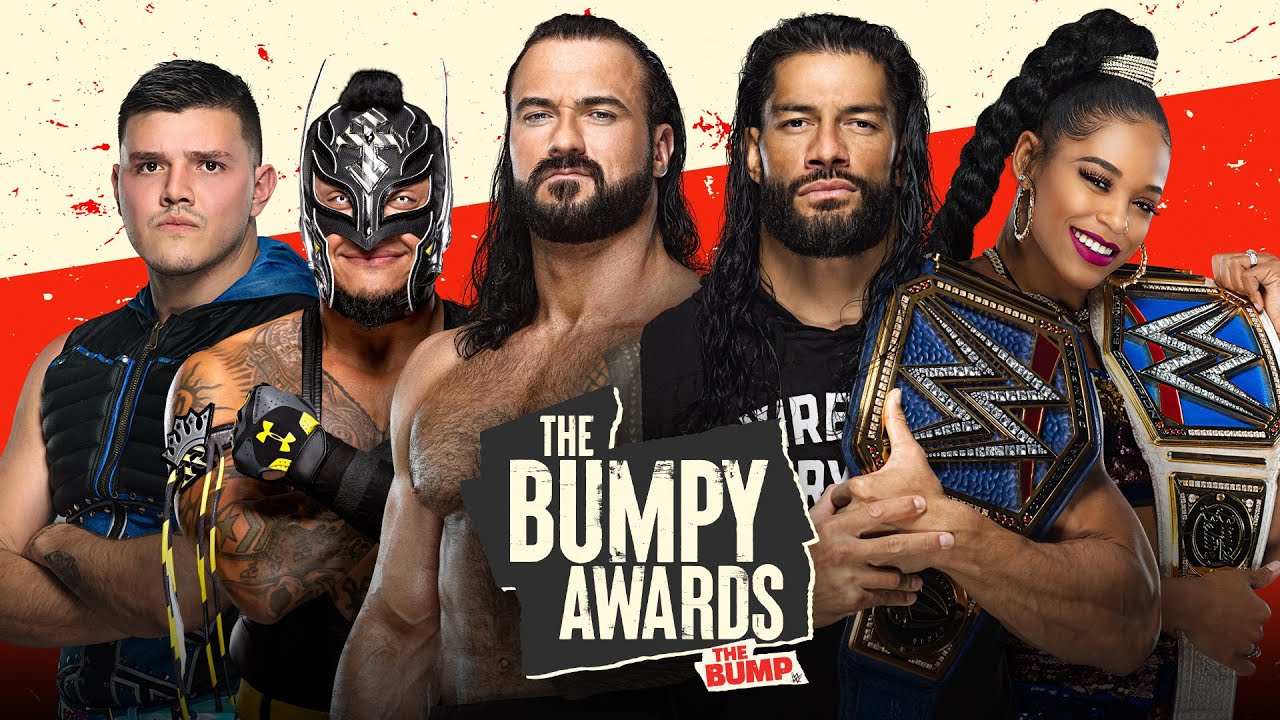 This week, WWE’s The Bump held their second annual Bumpy Awards. Fans from all over were able to vote for their favorite Superstar, Match, Rivalry, Moment, and Tag Team of the half-year.

They began the show by presenting the “Tag Team of the Half-Year,” which went to former SmackDown Tag Team Champions Rey & Dominik Mysterio.

After receiving their award, Rey and Dominik Mysterio came on to personally thank the WWE fans for honoring them with this award. Rey was stunned that his son won his first-ever WWE award just two weeks before celebrating his first-anniversary debut for the company:

“I am speechless, man. We have this because of the fans,” Rey Mysterio started with a big smile. “Everything we do is for you guys. We love you all, and we thank you all for the support because, without you guys, we wouldn’t be here.”

The second award was the “Rivalry of the Half-Year,” which went to former Undisputed Era members Adam Cole and Kyle O’Reilly. Tensions ran high when both men came on to accept their award – not to mention they have to share this one award. Cole, smug as ever, told the WWE fans, ‘you’re welcome,’ for making this rivalry come to life, and O’Reilly added that whether or not this is a good or bad thing, their opposition is far from over.

“Whether we are united as allies, creating Undisputed Era – the most dominant era in NXT history – or we’re winning ‘Rivalry of the Half-Year’ as bitter rivals, Adam Cole, you and I are destined to make history together. For better or for worse, my friend,” Kyle O’Reilly concluded.

Grammy award winner Bad Bunny took home the “Moment of the Half-Year” award after winning up his first-ever WrestleMania match with Damian Priest against The Miz and John Morrison. The Miz, who was uninformed this award belonged to Bad Bunny, tried to steal the trophy. Luckily for him, Priest came into the shot and rolled him out. Once he got hold of the award, Priest thanked the fans for making Bad Bunny and his moment live forever.

“First of all, I would like to say thank you. Thank you to all of the fans around the world that helped make our moment at WrestleMania live forever,” Damian Priest stated gratefully. “I think I speak for Bad Bunny when I say winning a Bumpy makes it all that much sweeter.”

After picking up trophies like the EPSY and potentially many more down the line, the SmackDown Women’s Champion Bianca Belair was ecstatic fans voted her and Sasha Banks’ WrestleMania title match as “Match of the Half-Year.” As she accepted the award, Belair happened to mention that despite Bank’s backstabbing betrayal last week, she will offer “The Boss” a rematch anytime she wants it.

“I’m so blessed to be the person, alongside Sasha Banks in that ring. I always say this: I pay tribute to the women who came before us that paved the way so we could walk on this same road. It could’ve been anyone in this position, but it was Sasha Banks and I. I am so grateful to be the person in that position and to make history,” Bianca Belair happily stated.

“While you [Sasha Banks] were away on your spring break, I was here getting better, better and better as the SmackDown Women’s Champion, which is only good for me. I’m down to give you a rematch at any point in time. Let’s do it!”

Rounding out the main awards, the Universal Champion Roman Reigns took home the “Superstar of the Half-Year” award. Unimpressed with it, he suggested this trophy should be given to his soon-to-be SummerSlam opponent, the one and only, John Cena.

“Give it to John Cena. He needs it a little bit more than I do,” Roman Reigns snuffed.

Since the Bumpy Awards began last year, the panel provides a very special Superstar the “Lifetime Achievement Award,” an award that recognizes one Superstar for their dedication, showmanship and honor both in and out of the ring. Last year’s award went to Drake Maverick. This year, the award was given to Drew McIntyre for being a well class act throughout the ThunderDome era. A frequent guest on the show, “”The Scottish Warrior” happily accepted this prize and thanked the fans for being part of his hard yet rewarding journey.

“I wouldn’t be in the position I’m in without the fans,” Drew McIntyre pointed out during his acceptance speech. “I have had such a wild career; lots of ups and downs. I didn’t become ‘The Chosen One’ by the powers that be. I became ‘The Chosen One’ by the fans. No matter how dark times get, there’s always a light at the end of the tunnel. Keep fighting for your dreams and keep believing in yourself.”

Other notable awards include:

Gamer of the Half-Year: Tyler Breeze

Best Dressed of the Half-Year: Tie between Sonya Deville and Seth Rollins

Gifable Moment of the Half-Year: Ricochet and John Morrison

Social Superstar of the Half-Year: Bayley

Referee of the Half-Year: Charles Robinson

Return of the Half-Year: Kayla Braxton

You can watch the second annual Bumpy Awards here. If you use any of the quotes in this article, please credit WWE’s The Bump with a h/t to Wrestling Inc. for the transcription.

The #BumpyAwards kicks off with Tag Team of the Half-Year!

And we have both of them here to accept… and it's a tense scene. 😅@WWETheBump pic.twitter.com/vg456V9b9O

The #BumpyAwards continues with Match of the Half-Year!

#UniversalChampion @WWERomanReigns won the Bumpy Award for Superstar of the Half-Year!

In a speech alongside @HeymanHustle during the 2021 #BumpyAwards, the Head of the Table had a surprising message for @JohnCena! pic.twitter.com/gfB3KvWWd6

The most appearances on @WWETheBump. We are ALWAYS happy to speak with such an incredible individual. The passion and charm we feel is one of many reasons why you reached the top of the mountain.