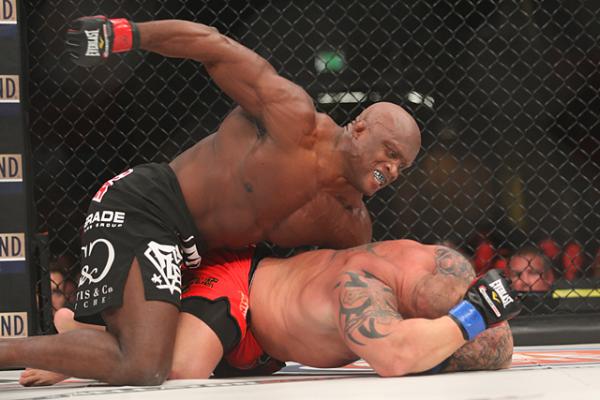 WWE Champion Bobby Lashley puts his title on the line against Goldberg this Saturday at WWE SummerSlam. While this will be the first encounter between the two, the All-Mighty isn’t sweating his opponent.

Speaking in an exclusive interview with Wrestling Inc.’s Brian Wohl, Lashley says he feels “like a million bucks.”

“A lot of times we go into matches thinking about the little injuries, the bumps and bruises that we have. I have none,” Lashley declared. “I’ve just been conditioning myself to be in the greatest shape I’ve ever been.”

Lashley and Goldberg’s feud has gotten personal over the past few weeks. The WWE Champion’s manager, MVP, has taunted Goldberg’s son, Gage, on multiple occasions.

In the four years since Gage was first seen on WWE TV, he’s put some size on, leading many to speculate on a potential squared circle future for the Hall of Famer’s son.

“I don’t know where he’s at,” Lashley said of a possible Gage Goldberg wrestling career. “The kid looks like he’s in pretty good shape. He looks like a pretty athletic kid. Who knows.”

Before he returned to WWE in 2018, Lashley dominated both the six-sided ring at Impact Wrestling and the octagon at Bellator MMA. The American Top Team member boasts an impressive 15-2 mixed martial arts record, but has not fought since 2016.

Despite the hiatus, Lashley revealed he is technically still on the Bellator roster. He noted that if he ever left WWE, he would return to Bellator.

“I’m still contracted with the Bellator. I love MMA, but professional wrestling is my life. WWE is my life,” Lashley said. “I had a stipulation put in my contract that says if the WWE ever came back to me, then I’d be able to go. But yeah, if there was ever something where something happened [and I left] WWE, I would go back to Bellator.”